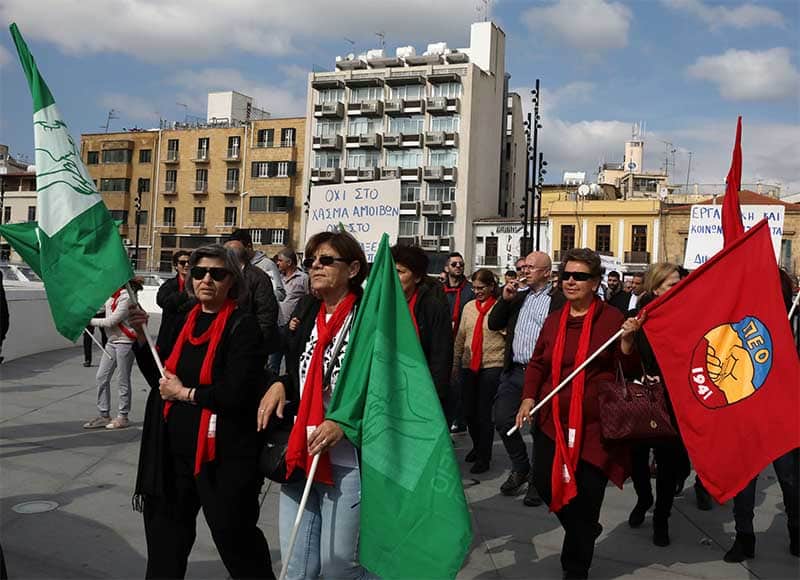 President Nicos Anastasiades on Friday extended his wishes to the island’s female population on the occasion of International Women’s Day.

“You worthily respond to your multiple roles… decisively contributing to the growth and prosperity of our country,” he said on Facebook.

But according to the Mediterranean Institute of Gender Studies (Migs) there have been setbacks when it comes to female participation in political life over the last years.

According to a timeline the institute has created on women in Cyprus since 1900, when Nicos Anastasiades was first elected as president in 2013 he reduced the number of female ministers from three to one. The number however rose back to three when he got elected for a second term in February last year with the appointment of Vassiliki Anastasiadou as Transport Minister and Natasa Pilides as Deputy Minister of Shipping.

The timeline’s aim, according to Migs, is to make people think about the way history is being written and taught and to make gender a political issue “that enriches both history itself and the prospect of our present and future.”

Cyprus, according to Migs’ timeline “is currently among the six European countries with the most male-dominated political scene.”

Currently, there are 10 female MPs in parliament and 46 men, which is 17.9 per cent. At this percentage, Cyprus ranks 117th among 193 countries in the Inter-Parliamentary Union’s (IPU) world classification on women in national parliaments.

Lawyer Stella Soulioti was the first woman to be appointed as minister, assuming duties as minister of justice in 1960. She was also the first female lawyer in Cyprus and the first and only woman to serve as Attorney-general.

The first female MP was Turkish Cypriot Ayla Halit Kazim who assumed duties in October 1963. The first Greek Cypriot MP was Rina Katselli who served between 1981 and 1996.

A woman was also among the founders of the Communist Party of Cyprus in 1926, Katina Nicolaou.
Women in Cyprus were allowed to vote for the first time in 1906 in the elections for the education committee since all taxpayers had the right to cast their vote. A few months later however, parliament revoked that right. It was not until December 1959 when Cypriot women had the right to vote again as citizens at the first presidential elections.

In 2018, the gender pay gap in Cyprus was found to be 13.9 per cent, meaning that for every €100 men get paid, women get €86. Female workers however, have made several struggles over the decades in claiming social benefits and eight-hour working days.

In 1920 Μaria Rousou became the first female doctor after graduating from the University of Athens. She left the profession a few years later however after getting married.

The first female workers’ unions started to appear in the late 1930s and in 1938 female workers at a spinnery went on strike demanding eight-hour working days instead of 10-or-12-hour shifts, pay raises, and respect from their supervisors. They failed at the time but their demands were satisfied some four years later after the entire staff – including the men – went on strike.

The state social insurance department was established two years later as a result of their demands.
Women were also very active in peace and reunification activities after the 1974 war. In 1975 the first women’s peace march took place with the participation of 30,000 women who demanded return to their occupied homes. The Women’s Civic Initiative for Peace was established in 1999 by Turkish Cypriot women aiming to cultivate a peace culture on the island. Two years later, the bicommunal group Hands Across the Divide was created by women from various communities in Cyprus aiming to promote peace and co-existence.

The foreign ministry also took the opportunity on Friday to announce the implementation of a series of actions to turn 2019 into a landmark year in its efforts to strengthen the country’s ability “to contribute effectively in accelerating progress towards gender equality across all sectors.”

The ministry said that recognising that the violation and suppression of women’s rights and sex-based discrimination is a universal problem with negative socio-economic consequences and implications, so it has decided to mainstream the gender dimension into its foreign policy.

Toward that end, seminars will be held for all staff at the Central Service of the ministry on the effective integration of gender into foreign policy while a training seminar exclusively addressed to female staff will focus on women and leadership, aiming at narrowing the gap between women and men in decision-making positions at the ministry.

Advisor to the foreign minister on gender issues Josie Christodoulou will meanwhile participate in the 63rd Session of the UN Commission on the Status of Women, taking place next week in New York, with the aim of developing the cooperation between the Republic and other UN member states especially in the field of combating inequality between women and men in all sectors.

Other actions include organising a public consultation on gender mainstreaming with the involvement of civil society and in particular bodies and organisations specialising in the promotion of equality between women and men.