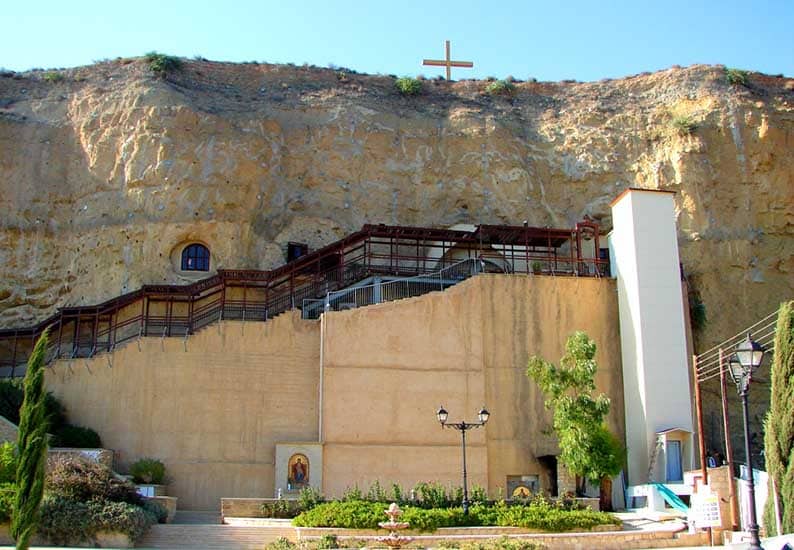 The Panayia Chrysospiliotissa church in Deftera (photo An. Antoniou)

A small cave that houses an early-Christian church on the outskirts of the capital faces imminent danger from construction work above ground to build a petrol station.

The priest of the church of Panayia Chrysospiliotissa in the village of Deftera near Nicosia warned on Thursday that the ancient cave the church is housed in could collapse due to the construction work.

Father Charalambos has made repeated pleas throughout week for authorities to intervene after construction work began just 70 metres from the top of the cave.

The owner of the business obtained a permit from the district administration, the priest told the Cyprus Mail, but no permission has been requested from the antiquities and the geological survey departments.

“The cave is an ancient monument dating back to the first century AD and has rare, 12th century murals,” Father Charalambos said. He added that the cave is a Unesco heritage site and is under the care of the antiquities department. Moreover, the cave is not carved on solid rock but on sandstone which makes it very sensitive and susceptible to collapse, the priest said.

Since construction work started about a week ago, seismic-like activity has been observed causing rocks and dust to fall inside the church, he said.

The priest also said that just 12 metres from the construction site lies an ancient necropolis dating back to the Cypro-archaic period.

“Where is the antiquities department, the geological survey department?” he asked.

After the matter drew public attention, work has temporarily stopped pending permits from the antiquities and the geological survey departments that are to carry out studies on the impact of the project on the cave.

But the priest does not expect any positive developments on that front as the two authorities are expected to issue the necessary permits.

He vowed to conduct an independent study on the impact of the construction and operation of the petrol station to and even seek legal action.

The church is believed to date back to the early Christian period, and it attracts thousands of visitors from all over the island and abroad.

The annual religious festival held there on the occasion of the day of the Dormition of Virgin Mary observed on August 15, is on the list of Unesco’s Intangible Cultural Heritage, Father Charalambos said. The festival takes place between August 7 and 16 and attracts thousands of pilgrims.

The Greens said on Thursday that the construction of a petrol station above one of the most ancient monuments of Cyprus was a crime.

The party’s chairman and MP, Giorgos Perdikis, has already called for a parliamentary debate on the matter.

The Greens said the government should take action to protect the cave and the church as they are part of the country’s cultural heritage.

Chelsea too strong for Kiev, close in on Europa League quarter-final spot

Our View: Too much noise with nothing to say