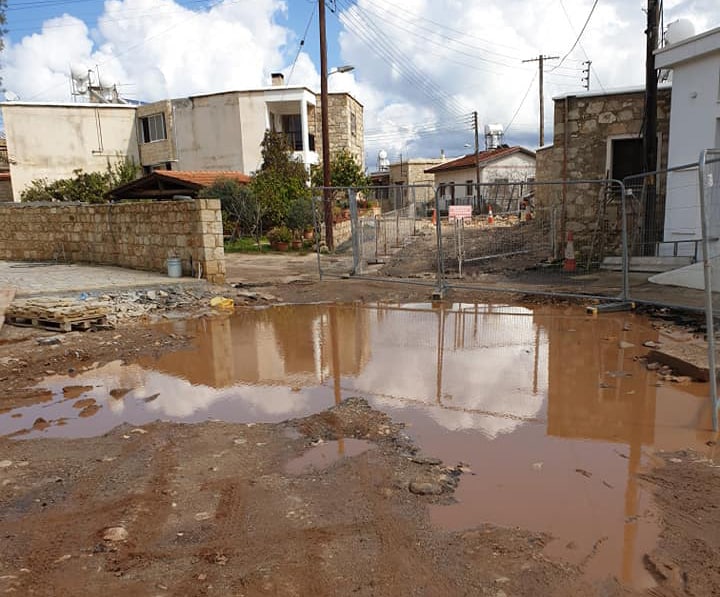 Upgrading works in the centre of Neo Chorio village in Paphos have left the main access road through the village dug up and impassable for residents, many of them elderly.

They have been left marooned in their homes for close to two weeks.

“I am stuck at home on my own and unable to go anywhere. It’s only because of the goodness of neighbours and my daughter and her husband that I’m OK. They come to see me and bring me provisions,” 68-year-old resident, Katerina Panagi told the Sunday Mail.

Panagi said that although she had been made aware of the upgrading projects ahead of time, she had no idea they would prevent access to the village.

The upgrading works commenced in January and are expected to last all year.

The road of Spyrou Panagi, (named after her son who died in an accident) looks like a battle ground, after recent heavy rainfall left it covered in deep puddles, mud and stones.

Like many other residents, Panagi has lived her entire life in the village and her home was built by her late husband. Daily village life is usually a welcome and sociable routine, but the road, which has 12 homes built along it, is now far too dangerous for her and others, to navigate.

“I can’t go and see friends to have coffee, I can’t get to the local shop or to the bus stop, nor the church or the cemetery which are both very important to me.”

The two projects currently underway in the area will cost close to a million euros altogether and are part of a concerted effort to upgrade the village centre, according to Paphos district officer, Mary Lambrou.

“The first project is the reformation of the village centre and will cost around half a million euros (including VAT) and is being paid for by the government,” she said, adding that the upgrade is being carried out sensitively, using traditional materials.

The second is a project subsidised with EU funds with a small portion from the government, costing around three hundred thousand euros.

“This involves the area of Saint Minas church,” she said.

The church, which was built in 1912, is located in the centre of the village and the only one servicing the community.

According to Panagi’s son-in-law, David Stangroom, the church is inaccessible too.

“It looks like a war zone. Elderly residents have been left stuck in their homes for two weeks. My mother-in-law enjoys going to church regularly and this is something she can’t do now and it’s very upsetting,” he said.

Adding to his frustration is that the contractor said he was unable to work in bad weather, leading to delays.

“My mother-in-law is living on her own. My wife and I both work but luckily only live ten minutes away. We were told that she shouldn’t be attempting to walk up the road as it’s dangerous. She is totally cut off.”

Neo Chorio community leader, Andreas Christodoulou told the Sunday Mail that he had received numerous complaints regarding a lack of access, but said that the matter is out of his hands.

He said that the community board was sympathetic to the predicament of residents and that their complaints were justified.

“This lack of access is a big problem for our residents, but it is a government project and not under our supervision. We have been applying pressure on the contractor to provide access as quickly as possible. It’s all we can do,” he said.

He added that bad weather was not the only obstacle as the project is also being held up by utilities services such as Cyta, which are being placed under the new road.

“They were late submitting their plan, this should have been worked out before they started.”

Panagi said that the contractor had assured he would try to fix an access way but that the weather hindered the process.

“But why did they start this without a plan to create access for us all?” she asked.

Lambrou said that she had been unaware of the difficulties, and after being contacted by the Sunday Mail, had made enquiries and discovered that a number of complaints had been made.

“I understand that access to some private premises is not possible. This is supposed to be provided and an obligation of the construction company.”

Panagi said that the situation has left her feeling sad and angry and that so far, no one has helped.

“I would just like a safe access path so that I can get into the village and to the church which is only 50 metres away,” she said.

Lambrou assured that she would send an engineer to the area to check that access is being provided and “follow this up”.

Apollon move clear at the top after easy derby win

Is the proposed golf project at Cape Greco going to be a giveaway?