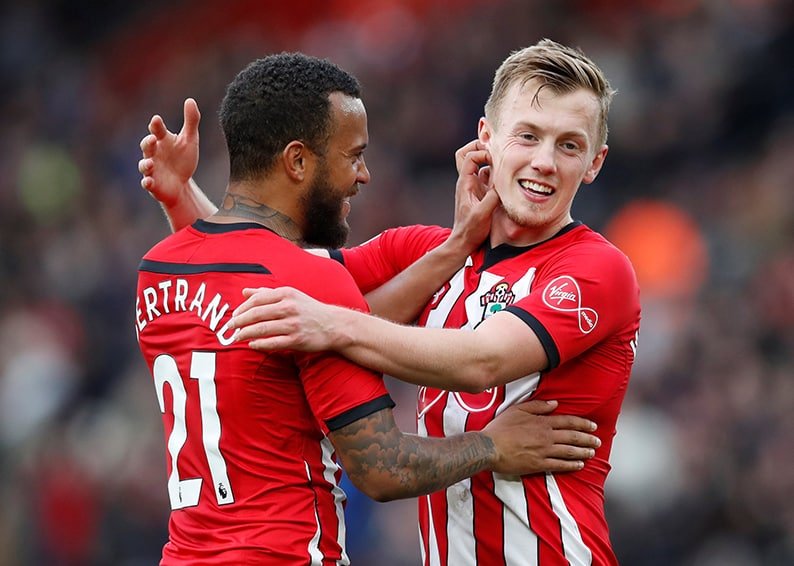 Southampton's James Ward-Prowse and Ryan Bertrand celebrate after the match

Goals from Yan Valery and James Ward-Prowse conjured a spectacular comeback win for Southampton who stunned Tottenham Hotspur 2-1 at St Mary’s on Saturday after being completely outclassed in the first half.

Both players had scored in the 3-2 defeat at Manchester United and struck again within five second-half minutes which turned the game and condemned Spurs to a fourth successive Premier League game without a win — their worst run since 2017.

Yet for much of the match it had looked routine for the visitors who took the lead through Harry Kane. The striker combined beautifully with the returning Dele Alli on 26 minutes for his 200th career goal and seventh in five games against shell-shocked Saints.

Christian Eriksen went close to increasing the lead, fizzing one shot against the bar and having another parried away by keeper Angus Gunn.

The introduction of Shane Long — one of two changes at the break — injected new life into the Saints and although the Irishman lasted just 15 minutes before going off injured, he inspired a revival as Valery scored on 76 minutes with a shot that bounced off the ground.

Defeat left Spurs hanging on to third place, three points ahead of Manchester United who have a game in hand and play Arsenal on Sunday.

Newcastle United produced a remarkable second-half fightback to overturn a two-goal deficit and beat Everton 3-2, their fifth successive home win in the Premier League, on Saturday.

A goal from Salomon Rondon and a late double from Ayoze Perez completely transformed the game after the home side were feeling aggrieved about going two down after a controversial first-half incident.

Cardiff got off to a flying start, taking the lead in the fourth minute when Spaniard Victor Camarasa broke from midfield and fed Joseph Murphy whose low cross from the right was turned in at the near post by Junior Hoilett.

Striker Callum Wilson and winger Ryan Fraser notched a goal and an assist each as Bournemouth cruised to a 2-0 win at Huddersfield Town on Saturday, ending a run of four Premier League games without a win.

Wilson returned after six games out due to injury and opened the scoring in the 20th minute, meeting Fraser’s pinpoint cross from close range with his chest as England manager Gareth Southgate watched form the stands.

Jamie Vardy scored his 100th and 101st goals for Leicester City to seal a 3-1 home Premier League win over Fulham on Saturday and give new manager Brendan Rodgers his win as manager of the club.

Rodgers, who started his tenure with a 2-1 defeat at Watford, was able to breathe a sigh of relief as England striker Vardy scored twice in the closing stages after setting up his team’s opener.

Apollon move clear at the top after easy derby win