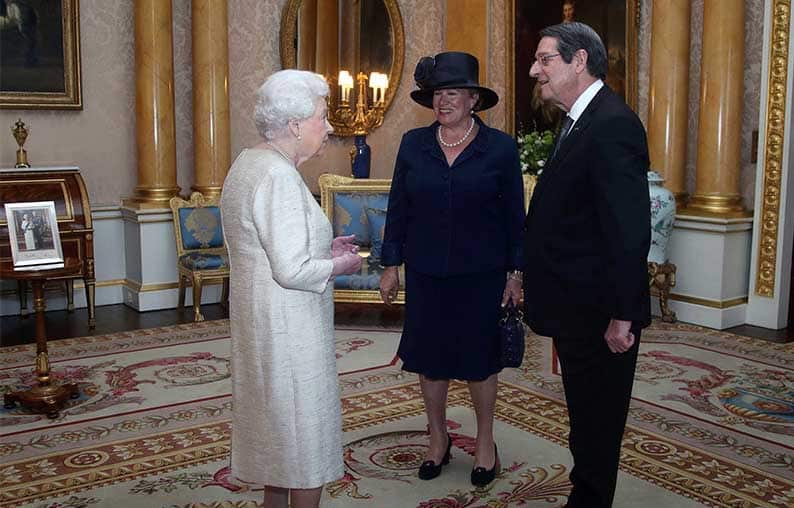 The pictures of HM Queen Elizabeth II of the United Kingdom with President Nicos Anastasiades of the Republic of Cyprus last week reminded me of a picture of Archbishop Makarios III sitting next to the Queen at the Commonwealth Conference in Jamaica in 1975.

President Makarios was very proud of this picture. It shows him as the Queen’s most senior statesman in the Commonwealth, sitting to her right taken only months after the attempt to depose him in 1974 as proof positive of his resilience in adversity. Makarios was not royal, but he had the trappings of a royal and most Greek Cypriots loved him for being so conspicuous in world politics that must have been of enormous assistance in the recognition stakes.

In an interview with the journalist Oriana Fallaci in New York shortly before he returned to Cyprus in December 1974 – essential reading if you want to understand the Greek Cypriot case –  he spoke openly about the dire predicament in which Cyprus found herself and  the difficulties he had encountered with Greece and Turkey. Fallaci liked Makarios. She found him highly intelligent with a teasing sense of humour and a hinterland beyond politics.

Fighting spread across the whole island that terrible Christmas and continued sporadically on and off until 1974 but none since then. It is therefore as plain as a pike staff that the Turkish Cypriots have a point about security and anyone who says otherwise is in denial.

On the other side Makarios told Fallaci that he had not deprived the Turkish Cypriots of their constitutional privileges as they claimed: ‘I simply complained about those privileges as they only served to hamper the functioning of the state.’ Again there is no point in being in denial about this as it is plainly the case that the Turkish Cypriot community was given excessive political equality under the 1960 constitution, which still rankles with many Greek Cypriots.

If you stand back and think about Cyprus and her predicament, it beggars belief that people still disagree on the need for security and a smooth functioning state.

Perhaps now that the Queen is momentarily in the limelight in Cyprus the way her United Kingdom devolved power to her kingdom in Scotland without detracting from the unity of the rest of the realm is worth a closer look.

Scotland and England united gradually. When Queen Elizabeth I died and left no heirs her cousin James VI of Scotland became James I of England. What then happened was that by the early 1700s there was a political decision for the two kingdoms to be united in one parliament, following which Scotland sent members of parliament to Westminster on the understanding that members from English constituencies would not vote on Scottish matters.

Anyone who knows the Scots knows how fiercely patriotic they are about being Scottish, but the majority are also proud Brits who do not feel any less part of the UK.

That said, after the rise of the Scottish Nationalist Party, there was a movement in favour of Scottish independence. But that was neutralised by devolution, which was made to happen by the Labour government of Tony Blair of 1997 that was crowded with Scotsmen. People like Gordon Brown, Alexander Irvine, Alastair Darling and Donald Dewar made sure that by 1998 real power was devolved to Scotland.

Devolution was Britain’s way of granting as much political equality as is warranted by national differences while at the same time respecting the principle of majority rule. With appropriate adjustments it is obviously suitable to the situation in Cyprus because it respects the principle of majority rule as well as that of political equality – what is there not to like about devolution for Cyprus?

Under the Scottish model, different areas of government were devolved to satisfy Scotland’s passion not to be governed by England save in areas that suits both. The legal system in Scotland has always been different, so there was no need to devolve the administration of justice except that two Scottish judges sit in the UK supreme court in civil cases; and the sovereign is Queen of Scotland as much as she is of England that has been so since the time of King James VI.

After devolution Scotland has her own parliament and a First Minister and a cabinet of ministers and her own civil service and the facility to engage with the EU in Brussels independently.

It is a very British solution, but it works in as much as it provides Scots with political equality that is proportionate to the political needs of Scotland without interfering with the smooth running of the rest of Britain.

Inevitably there is some friction on both sides. For example the English moan endlessly about the Midlothian question: why Scottish MPs vote on English matters whereas English MPs cannot vote on Scottish matters – to which the answer is that they are the minority community that needs a little extra political equality in some areas to feel secure and stay loyal – a point that Greek Cypriots should take note.

Another recent source of friction is the fact that Scotland voted remain in the EU referendum very shortly after she had voted against Scottish independence. By contrast England voted to leave the EU. Yet most Scots accept that Scotland will leave the EU with the rest of the UK.

That then is a brief outline of how the British resolved the Scotland’s clamour for self-government. Not by federation but by devolution. The reason why we are unable to do the same in Cyprus is primarily to do with Turkish Cypriot insistence on excessive political equality. But as Makarios put it: excessive political equality tends to hamper the functioning of the state.

However, provided the Greek Cypriot community accepts that in light of the existential threat Turkish Cypriots faced in 1963 from the likes of Sampson and his ilk, the issue of security cannot just be wished away by slogans. On the other hand there is absolutely no reason why unnecessary political equality that impedes the smooth running of the state cannot be given up in exchange for devolved powers in key areas.

It would not be difficult to amend the 1960 constitution to achieve devolution. A way forward is only to have referendums on changes to its basic provisions. So enough of this nonsense about terms of reference and what was agreed and what was not agreed at Crans-Montana. The idea that anything will come of it is definitely for the birds.

I do not begrudge President Anastasiades and his entourage the fact that they enjoyed themselves at Buckingham Palace last week except to say that with such royal perks I can see why they are not in any great hurry to do themselves out of a job.

To end on a personal note, the last time I was at Buckingham Palace was at a garden party after I became a Queen’s Counsel in the early 90s when Vanessa, my wife at the time, complained, like old Diogenes, that the quality of the cucumber sandwiches was not royal.

Spare the scapegoat in the Co-op affair