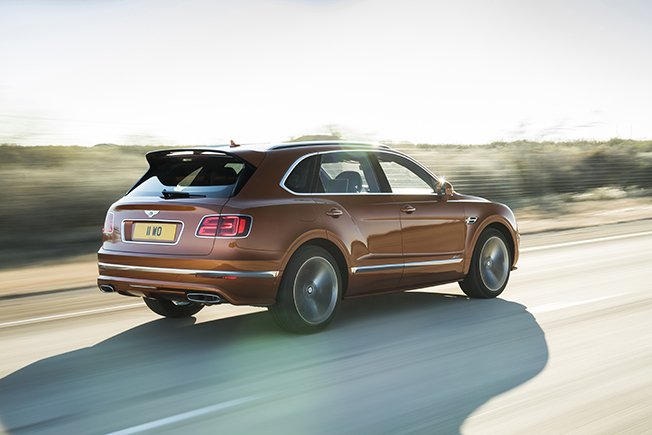 Bentley celebrates its centenary year with the fastest SUV in the world, the 6.0-litre Bentayga Speed, with 626bhp and a top speed of 305 km/h

The 2019 Geneva Motor Show opened its doors to the public earlier this week, and will run until March 17th, with a host of new metal on display and almost all the major manufacturers taking part (with the notable exception of Ford and Jaguar Land Rover).

Some of the main attractions at this year’s show at Palexpo near Geneva airport are Aston Martin’s Project 003 – a new mid-engined hypercar expected to be named Valhalla and join the Valkyrie and Valkyrie Pro. It is built around a lightweight structure and powered by a turbocharged petrol-electric hybrid engine.

Audi reveals the E-tron SUV concept, continuing its expansion of the range of electric vehicles, although it’s not clear whether this concept will be a direct preview of the upcoming Q4.

The German manufacturer will also present four new plug-in hybrid models with the new TFSI e powertrain, all of which have an electric-only range of 40 kilometres.

Bentley celebrates its centenary year with a model based on the Continental GT that brings to mind the 1930 ‘Blower’ Bentley Le Mans race car. Also on the British maker’s stand is the fastest SUV in the world, the 6.0-litre Bentayga Speed, with 626bhp and a top speed of 305 km/h.

At the other end of the scale, Citroën (also celebrating its centenary this year) marks the occasion with a new concept, the AMI ONE: an all-electric two-seater ‘city car’ inspired by the iconic 2CV – with a maximum speed of 45 km/h!

The Honda e Prototype is inspired by the original Honda Civic. It has a ‘modern-retro’ look, with minimal detailing. Its symmetrical headlights with LED technology sit within a piano-black surround, an effect that is repeated at the rear of the car. Everything that can be hidden away has been. Driver assistance systems are almost invisible. Charging points are out of sight. Inside, there’s an uncluttered open-plan layout and a flat floor.

Mazda took the wraps off a ‘brand new’ compact SUV, which slots in above the CX-3 in its range, while Mitsubishi unveiled its latest all-electric SUV concept. The Engelberg Tourer Concept hints at Mitsubishi’s design direction for its next generation of SUVs.

Also on show is a new ‘wide body’ Morgan with a brand new engine and, as mentioned in last week’s Motor Mail, Peugeot highlight the 208 – an all-new supermini with ‘cutting edge design, upmarket interior and full EV option’.

Swiss start-up Piech Automotive, meanwhile, unveil the eye-catching Mark Zero electric sports car which reportedly cover 500 kilometres on a single charge. Anton Piëch is the son of Ferdinand Piëch, former chairman of the board at Volkswagen, and great-grandson of Ferdinand Porsche so we can assume he knows a thing or two about cars.

Volvo’s performance brand, Polestar, exhibits the Polestar 2, a 396bhp saloon slated for production in 2020 with a claimed range of 310 miles, and a 0-100km/h time of less than five seconds.

Renault’s fifth generation Clio gets a new range of engines and a plug-in hybrid is apparently slated for 2020. The biggest changes, though, are on the inside, as the French car maker seeks to improve perceived quality, cut down on hard plastics and enhance interior space both for passengers and luggage.

The Skoda Kamiq is a new compact SUV (the smallest in the range) that aims to compete with the Nissan Juke. A choice of either a 1.0-litre or 1.5-litre petrol will be offered, along with a 1.6-litre diesel when the car goes on sale later this year.

Also on the Skoda stand is the Vision iV four-door crossover-coupé concept, “a specific outlook of the brand’s electric future”.

Ending on a quirkier note, Volkswagen take us on a nostalgic trip back to the 1960s (well, sort of) with their ID Buggy. This electric beach buggy concept, inspired by the Meyers Manx (which was designed for desert racing by Californian Bruce Meyers and produced from 1964 to 1971) will have no doors and no roof (but it does have a roll-over bar) as well as open sills and large off-road tyres.

Production hasn’t yet been confirmed, but it is apparently “under consideration”

Must keep calm, says Barnes on criticism of Klopp