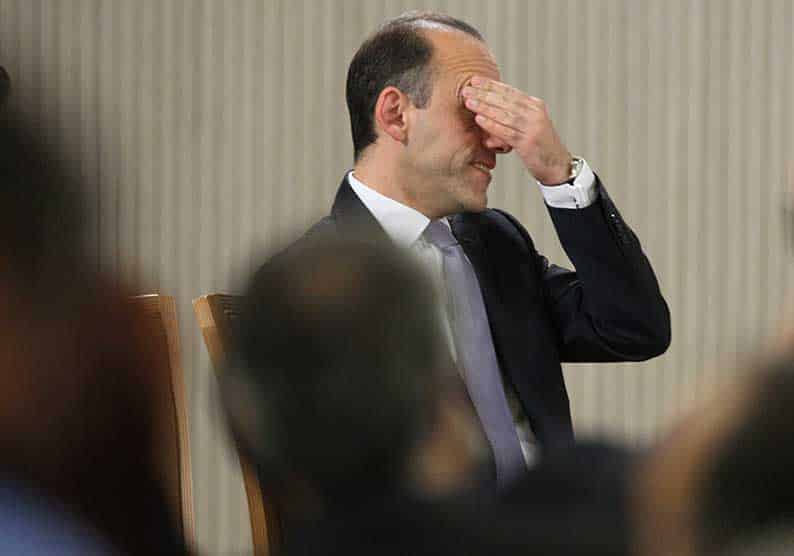 Last Wednesday, at 12 midday, the report into the collapse of the co-operative credit sector was released. Given that the report extends over 800 pages, I was somewhat surprised to see representatives of the opposition parties commenting on its content in a programme aired on television by the state broadcaster CyBC within about one hour after the document’s release.

Apparently, what they did was scan the table of contents, identify the report’s reference to the current Finance Minister Harris Georgiades, in chapter 27.8, and simply read the three pages in which the committee of enquiry assigned “heavy responsibility to the minister for the collapse of the Co-operative Credit Sector”.

The committee came to this conclusion based on the premise that the finance minister, as the representative of the state, i.e. the sole shareholder of the Co-operative Bank, had the power and the obligation to take drastic action to rectify the situation, something he failed to do, thus allowing the co-operative movement to collapse.

However, this position conflicts with the committee’s findings set out in part I of the report. The findings and the conclusions of the committee leave no room for doubt. The co-operative movement, from 1960 onwards, took a downturn and ended up as instrument of manipulation of the less well-off segments of the Cyprus population in the hands of the political parties. The committee has courageously pointed out that the co-operatives had gradually become a den of unaccountability, irresponsibility and incompetence, an unhappy situation for which the political parties of Cyprus, including those that by rotation governed Cyprus over this extended period of time, carry full responsibility. Thus, the co-operatives ended up being a rotten and corrupt organisation, a high priest of favouritism and unaccountability.

The problems confronting the co-operatives were known to everybody, over many decades. As the committee points out, another committee of enquiry was set up in 1980 to look into the co-operative movement. Their conclusions were similarly overwhelming and, in fact, led to punishment of senior co-op executives for the criminal offences they had committed.

What was the follow-up action? Absolutely nothing beyond certain changes in the law relating to co-operatives.

The assumption that is consistently made by the lawmakers in Cyprus, namely that the enactment of a law is the only prerequisite for resolving social and economic problems is, of course, entirely wrong. Despite the fact that such an assumption is completely unfounded, this legalistic approach to problem resolution remains a strongly held view amongst the lawmakers in Cyprus. The result of this attitude is the prolongation of the problems confronting our society into perpetuity.

But let’s revert to the topic of the discussion. The present finance minister inherited a rotten, corrupt and incompetent co-operative system. His overall objective was to avoid a “haircut” of the €10 billion deposits placed by relatively poor people with the co-operative banks (representing a liability of the banks towards their depositors).  In 2013, Georgiades attempted to salvage the situation with the injection of €1.5 billion of new capital. However, the opposition parties, with their rhetoric and by interjecting numerous obstacles to efforts in collecting the non-performing loans, not only undermined those efforts but also managed to render the damage irreversible.

It was at that stage that the decision to proceed with the resolution of co-operative movement must have been taken, the primary goal being the safeguarding of deposits from a “haircut”. The first move was to seek the involvement of an international strategic investor but no real interest was shown in such a project. Those who expressed an initial interest quickly withdrew from the process, once they completed their preliminary assessment of the situation.

Confronted with the dilemma of recapitalising the Co-operative Bank by forcing the investors to utilise part of their deposits for this purpose, or using taxpayers’ funds to bridge the gap, Georgiades elected the second option on the basis that the first option would have had a crushing impact on the less well-off sections of society.  The Hellenic Bank was the only available option. In terms of substance, the Hellenic Bank undertook the obligation to honour the obligations of the Co-operative Bank towards its depositors, amounting to €10 billion, and to employ 1,100 co-op employees (thus increasing its own employees from 1,400 to 2,500) in consideration of the payment of a token price of €50 million. An agreement was struck on this basis.

Of course, numerous mistakes were committed in the process of attempting to get the co-operative movement back on track. One of those mistakes was the naive idea of seeking a listing of Co-operative Bank shares on the Cyprus Stock Exchange, which prolonged the pain and the agony. As a former minister, Nikos Rolandis, succinctly stated in his testimony before the committee of enquiry “only God could save the co-operatives from the stranglehold of the political parties”.

On this basis, the efforts of opposition parties to shift their own responsibilities onto the shoulders of the finance minister is sheer audacity.

Have criminal offences been committed in the agonising course of the co-operative movement? The answer to this question will be provident by the attorney-general’s office. Based on the committee’s report, I suspect that people’s understandable thirst to see scapegoats hanged will remain unsatisfied.  And this is because the cancer had spread to the entire body of the co-operative movement and inevitably led to its collapse, but also because bad management is one thing, and criminal offences another.

Is the proposed golf project at Cape Greco going to be a giveaway?

Devolution is more suitable for Cyprus than federation