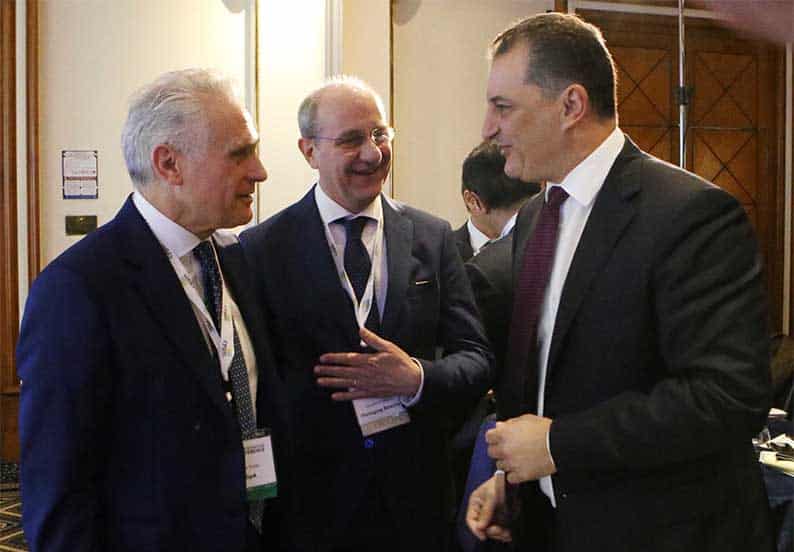 Should Cyprus pipe gas to Egypt or build a LNG plant at Vasiliko?

The future of Cyprus’ and the East Med’s gas discoveries was one of the key aims of the annual East Med Gas Conference (EMGC) held in Nicosia this week.

Organised by the US Gulf Energy Information, the conference was well attended, with a rich programme covering the state of the East Med, challenges in exploration and production of the region’s resources, energy security and Cyprus as an oil and gas service centre.

The conference was opened by Energy Minister Giorgos Lakkotrypis, who gave an overview of the results from block 10 and future plans. He said that Glafcos, the results of which were announced last week, is a high quality reservoir, with in-place gas estimated to be 5-8 trillion cubic feet (tcf), with recoverability expected to be high.

He added that the discovery of Glafcos reinforces the possibility of a liquefied natural gas plant (LNG) at Vasilikos, but more gas is needed. The government is also considering other export options, including the East Med gas pipeline and Floating LNG, should conditions allow it. Even compressed natural gas (CNG) is being considered as an option. This was well covered in a presentation by the American Bureau of Shipping (ABS).

During the conference it emerged that ExxonMobil is expected to confirm the drilling results and outline their plans during next month. Four months later the company will confirm its programme for further exploration. Details will be firmed up later, with additional drilling expected next year.

The minister also confirmed that ENI and Total are planning a new drilling round to involve five wells, including Calypso. The aim is to start this towards the end of the year, though it may slip into next year.

He also spoke about progress with Aphrodite. He confirmed that negotiations on the production sharing agreement and gas sales to Egypt’s LNG plants are progressing. He expects “to break news in the next few weeks”.

Lakkotrypis explained that the government approach is “to allow all gas finds to mature and make a choice for exploitation when the right time arrives”.

He said that the Council of Ministers has approved commencement of negotiations with ENI and Total on the award of a licence to explore and develop block 7. Negotiations are expected to start within days.

The formation of the East Med Gas Forum (EMGF) is progressing, with a constitution being put in place. This should help address some of the geopolitical challenges of the region. The key goal of EMGF is to enable East Med gas to reach global markets in the most effective way.

Concluding, Lakkotrypis said this is the beginning. “It is a long game and it needs patience.”

The keynote speech was by Carlo Vito Russo, ENI’s executive vice-president for Europe and Russia. He said that the first East Med gas discoveries started in in 1960s. Since then many discoveries have been made, culminating with the giant Zohr. This started a new era, attracting interest to the region’s carbonate formations. Glafcos and Calypso added to this potential.

But more exploration is needed to assess the full potential of these formations. Synergy between gas discoveries, ultimately clustering them, could help unlock monetisation. ENI and Total are in the process of re-assessing block 6 prospects. One of the suggestions made during the conference is that the most efficient way to develop Calypso is through a tie-in to the Zohr facilities.

Russo said that recent gas discoveries are good, but Cyprus is not yet a gas player. This will take time and more discoveries.

Yves Grosjean, general manager of Total Cyprus, talked about Total’s role in an energy world in transition. The company aims to provide the world with reliable, affordable and clean energy. In order to respond to this, it is growing its natural gas and clean energy business.

Total expects the LNG demand-supply gap to increase after 2023, but gas will need to be competitive against coal and renewables. Total aims to achieve this by reducing liquefaction costs to below $2/mmbtu. Reducing project costs to as-low-as-possible is key to securing future export markets. Expensive-to-develop projects will struggle to secure buyers.

Panos Benos, CFO Energean, presented the company’s impressive project to develop the Karish and Tanin gas-fields in Israel. Energean started a new drilling round, hoping to increase its proven reserves. He repeated the company’s offer to construct a pipeline from its Israeli gas-fields to provide Cyprus with natural gas at a very competitive price, less than $7 per million btu.

It should be noted that the planned import of LNG, necessary until Cyprus’ own gas is available, will probably cost EAC over $10 per million btu, almost 50 per cent higher than Energean’s offer. This will lead to an increase to the already expensive price of electricity.

In a panel discussion, representatives of ENI, Total and ExxonMobil, confirmed Cyprus’ potential to become a service centre for oil and gas exploration and production in the East Med. But they stressed the urgent need for the country to put in place the necessary infrastructure and support services, particularly with regard to improving the currently inadequate port facilities, essential for the next drilling round, and gain ground against its competitors before it is too late.

The sale of Aphrodite gas to Egypt’s LNG plants appears to be close to fruition. However, with low gas prices and the reversal of profit sharing, this not only will leave Cyprus with marginal net profits, but will also close the door to an early development of an LNG plant on the island.

In my presentation I suggested that that the LNG plant should be constructed as a matter of priority by exploiting the gas from discovered gas-fields in Cyprus’ EEZ, namely Glafcos, Aphrodite and Calypso, including gas from Israel. The longer we leave this, the harder it gets because of changing global markets and the inexorable increase in renewables, displacing fossil fuels. The preferred markets for Cyprus LNG are in Asia, where prices are better.

Based on my estimates, the combined recoverable gas resources, with a 90 per cent probability – normally used to arrive to investment decisions – are Glafcos 4 tcf, Calypso 3 tcf and Aphrodite 3.1 tcf. The total, close to 10 tcf, is at the lower end of the range, 10-15 tcf, needed for constructing a greenfield LNG plant at Vasilikos. The difference can be supplied from the Leviathan gas-field in Israel, which is still looking for export markets. This of course is not a new idea. It takes us back to the lost opportunity of 2012-2013 when Delek was quite keen to develop the LNG plant jointly.

This should be the ultimate target for Cyprus, and it is also likely to attract ExxonMobil’s interest. A LNG plant on  such a scale, developed as an integrated project jointly by ExxonMobil, Total and ENI, would bring unit costs down, thus increasing commerciality in what is a very competitive global LNG market.

An LNG plant at Vasilikos would also come with major add-on benefits for Cyprus, not just profits from the sale of LNG, such as employment, support industries and service companies, the development of a downstream industry using cheap gas as feedstock, low price gas to EAC bringing electricity prices down and so on.

Selling Aphrodite gas to Egypt’s LNG plants will provide none of these add-on benefits and, given global gas prices and recoverable quantities of gas at Aphrodite, profits will be marginal at best – less than $100 million per year. And if recoverable gas quantities are at the lower end of estimates, significant profits will be hard to come by.

Without the availability of Aphrodite gas, the LNG project will be set back at least 3 years, if not more.

Man charged for cycling under the influence

Co-op collapse due to NPLs, not minister repeats president