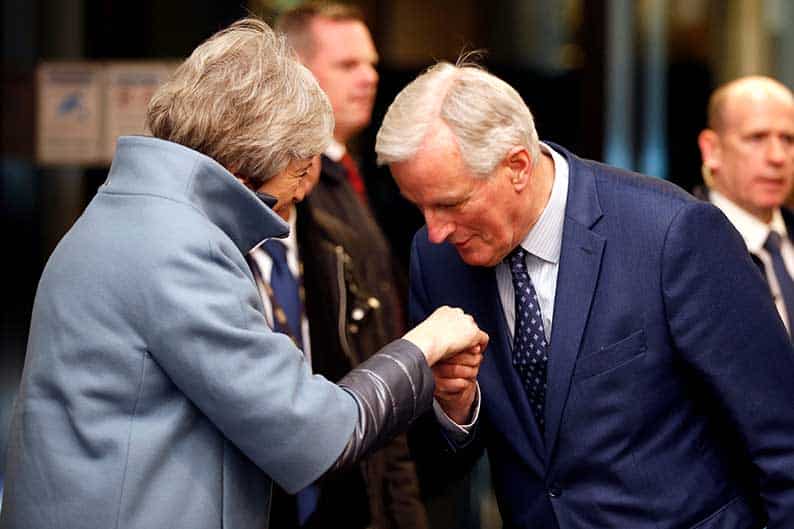 PRIME Minister Theresa May rushed to Strasbourg on Monday to seek a tweaked withdrawal deal from the European Union in a last-ditch effort to avoid another humiliating defeat in parliament of her plan to exit the bloc.

Just 18 days before the United Kingdom is due to leave the EU, there is still no ratified divorce deal and talks with the bloc stalled over the weekend as May was unable to break the political deadlock in London.

In a day of frenetic diplomacy ahead of a Tuesday parliamentary vote on her deal, May met European Commission President Jean-Claude Juncker in Strasbourg in an effort to find a way through the Brexit maze.

After May rejected a Brexit compromise hashed out in Brussels on Saturday, she left for Strasbourg on Monday.

“Please don’t assume this points to a deal,” a British official said. “It means there is basis for a further face to face discussion as part of the talks.”

May’s spokesman said a “meaningful” parliamentary vote on her deal would go ahead, even though talks with the EU are deadlocked.

The two sides are discussing assurances on the so-called Irish backstop, an insurance policy aimed to prevent the return of a hard border between Ireland and Northern Ireland, and a possible unilateral statement from Britain.

“It has been two steps forward, one step back with her but why would she bother to Strasbourg otherwise?” one EU official said when asked if a deal was on the cards.

But European officials also expressed frustration with May’s attempts to secure concessions with so little time left before Britain is due to leave on March 29.

The United Kingdom’s tortuous crisis over EU membership is approaching its finale with an extraordinary array of outcomes still possible, including a delay, a last-minute deal, a no-deal Brexit, a snap election or even another referendum. The country voted to leave the EU in a 2016 plebiscite.

In January the parliament voted to reject May’s deal by 230 votes, the biggest defeat for a government in modern British history. May has promised a new vote on Tuesday, hoping to deliver last-minute changes that would win over lawmakers.

If she loses that vote, she has promised to allow lawmakers a vote on leaving without a deal on Wednesday and, if they reject that, then a vote on whether to ask for a limited delay to Brexit.

EU ambassadors were told by the bloc’s Brexit negotiators that a possible compromise was on the table on Saturday but May was unable to convince her ministers so she turned it down.

Sterling see-sawed on Brexit news, falling in early trade on speculation that May could cancel the vote in parliament, but later surged on news that May would travel to Strasbourg and the possibility she could have a deal. It was trading at $1.3144 by late evening.

The focus of talks in Strasbourg was the backstop, an emergency fix aimed at avoiding controls on the sensitive border between the British province of Northern Ireland and EU member Ireland.

Many British MPs object to the backstop on the grounds that it could leave Britain subject to EU rules indefinitely or cleave Northern Ireland away from the rest of the United Kingdom.

The EU’s chief Brexit negotiator, Michel Barnier, said on Friday that the bloc could give London the unilateral right to leave its customs union after Brexit but that Britain would still need to keep the Irish border open.

The EU has repeatedly said it does not want to reopen the divorce deal, and the British government’s top lawyer has failed to find a legal fix.

May is hoping to agree a time limit on finding an alternatives to the backstop in the talks with the EU, BBC Political Editor Laura Kuenssberg said.

EU parliament negotiator Guy Verhofstadt said that he would stand by Ireland and the need to safeguard the Good Friday agreement in talks with May on Monday night. That agreement ended 30 years of violence in Northern Ireland.

In Brussels, diplomats and officials said Britain would face EU demands for billions of euros in cash if it fails to strike a Brexitdeal.

With no major changes yet secured, Brexit-supporting lawmakers said May’s deal would be defeated again on Tuesday.

“We will essentially be voting on exactly the same Withdrawal Agreement that we voted on last time and in very simple terms: if you ask the same question you are likely to get pretty much the same answer,” said Mark Francois, a pro-Brexit lawmaker in May’s Conservative Party.

Yvette Cooper, an opposition Labour Party lawmaker who has led efforts to hand parliament more control over Brexit, said parliament would try to take control of the exit process if May was unable to build a consensus.

Greens call for ‘clean every day’