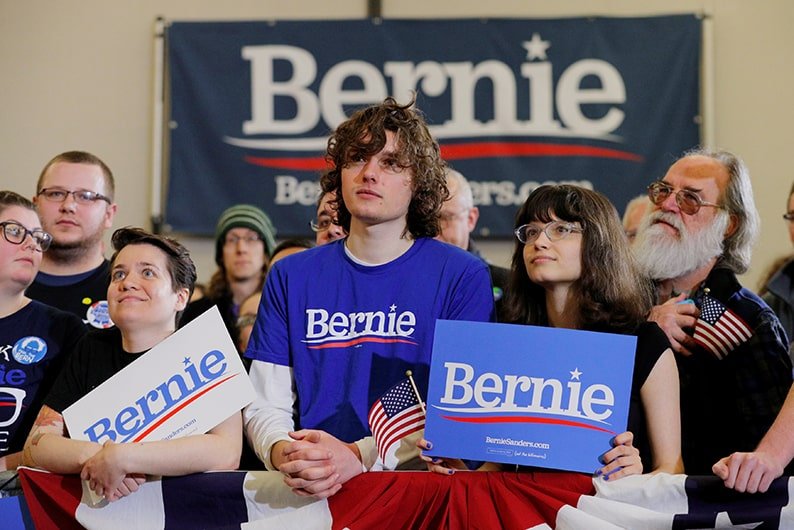 Supporters listen as Democratic 2020 US presidential candidate and US Senator Bernie Sanders (I-VT) is introduced at a campaign rally in Concord, New Hampshire

US Democrats have poured into the 2020 presidential race, lining up to join what has quickly become a crowded field of challengers vying for the party’s nomination to face President Donald Trump, the likely Republican nominee.

A diverse group that includes six US senators have either launched campaigns or formed exploratory committees to begin raising money and hiring staff for a presidential run.

Democrats are still waiting on a decision from a few prominent potential candidates, including former Vice President Joe Biden and former Congressman Beto O’Rourke of Texas, while others, including former New York City Mayor Michael Bloomberg and Senator Sherrod Brown of Ohio, have opted not to run.

CORY BOOKER – Booker, 49, a black, second-term senator from New Jersey and former mayor of Newark, gained prominence in the fight over Brett Kavanaugh’s Supreme Court nomination. He announced his candidacy on Feb. 1, the first day of Black History Month, mentioning the impact of racial discrimination on his family and saying he would focus on creating good jobs and reforming the criminal justice system.

PETE BUTTIGIEG – The mayor of South Bend, Indiana, launched a campaign to become the first openly gay president on Jan. 23 with a call for a new generation of leadership to bring fresh approaches to problems. Buttigieg, 37, brushed off questions about his experience by highlighting the economic turnaround in his city.

JULIAN CASTRO – The secretary of housing and urban development under President Barack Obama joined the race on Jan. 12 in his hometown of San Antonio, Texas, where he once served as mayor and city councilman. Castro, 44, the grandson of a Mexican immigrant, is so far the only Hispanic in the field. He has used his family’s personal story to criticize Trump’s border policies.

JOHN DELANEY – The former US congressman from Maryland was the first Democrat to enter the race in July 2017, long before most candidates began making their moves. Delaney, 55, has focused heavily on campaigning and organizing in Iowa, the state that will kick off the nominating fight in February 2020, making repeated trips there and visiting all 99 counties.

TULSI GABBARD – Gabbard, 37, is the first Hindu to serve in the US House of Representatives. After announcing her run on Jan. 11, her campaign quickly became engulfed in controversy over her past anti-gay activism and statements, and the Hawaii congresswoman was forced to apologize. “In my past, I said and believed things that were wrong,” she said.

KIRSTEN GILLIBRAND – An outspoken leader in the #MeToo movement against sexual assault and harassment, the senator from New York announced her candidacy on Jan. 15 on “The Late Show with Stephen Colbert.” Gillibrand, 52, has touted her rural roots in upstate New York and said she had proven her ability to win over more conservative rural voters. But so far she has gained very little support in opinion polls.

KAMALA HARRIS – Harris, 54, announced her candidacy on the holiday honoring slain civil rights leader Martin Luther King Jr. The daughter of immigrants from Jamaica and India has made a quick impact in a Democratic race that will be heavily influenced by women and minority voters. The first-term senator from California drew record ratings on a CNN televised town hall and has moved into a solid third place in polls behind Biden and Bernie Sanders.

JOHN HICKENLOOPER – The 67-year-old former Colorado governor has positioned himself as a centrist and an experienced officeholder with business experience. During his two terms in office, Colorado’s economy soared and the Western state expanded healthcare, passed a gun control law and legalized marijuana. The former geologist and brewpub owner is one of two governors in the race and so far has refused to take corporate money for his political action committee.

JAY INSLEE – The Washington state governor entered the field on March 1 with a vow to make climate change a central issue. Inslee, 68, also has moved to put a moratorium on capital punishment and fully implement Obamacare, formally known as the Affordable Care Act, and accompanying expansion of Medicaid health coverage for the poor. He spent 15 years in Congress before being elected governor in 2012.

AMY KLOBUCHAR – Klobuchar, 58, was the first moderate in the Democratic field. She gained national attention when she sparred with Brett Kavanaugh during Senate hearings on his Supreme Court nomination. Now in her third six-year term as a senator for Minnesota, Klobuchar’s launch came amid news reports that staff in her Senate office were asked to do menial tasks, making it difficult to hire high-level campaign strategists.

BERNIE SANDERS – The senator from Vermont lost the Democratic nomination in 2016 to Hillary Clinton but jumped in for a second try on Feb. 19. In his first run, Sanders, 77, drew strong backing from younger voters who supported his proposals for free tuition at public colleges, a $15 minimum wage and universal healthcare, ideas he plans to reprise as he vies for the 2020 nomination. The campaign reported raising $10 million in the first week.

ELIZABETH WARREN – The 69-year-old senator from Massachusetts, a leader of the party’s liberals and a fierce Wall Street critic who was instrumental in the creation of the Consumer Financial Protection Bureau, jumped into the race with a New Year’s Eve video release. On visits to states that hold early nominating contests such as Iowa and New Hampshire, she has focused on her populist economic message, promising to fight what she calls a rigged economic system that favors the wealthy.

MARIANNE WILLIAMSON – A self-help author and lecturer, she announced her campaign on Jan. 28. Williamson, 66, an antiwar activist and advocate for racial reconciliation, backs a $15-an-hour minimum wage, universal healthcare and a return to the Paris climate accord. She lost her previous foray into electoral politics, an independent bid for Congress in 2014 in California, coming in fourth.

ANDREW YANG – The entrepreneur launched his long-shot candidacy back in November 2017 around a single issue: the future of work in a post-industrial society and the threat that automation will eliminate millions of jobs. To deal with that challenge, Yang has proposed a Universal Basic Income of $1,000 a month for every American over the age of 18. Yang, 44, has no experience in politics and ran a series of startups before launching a nonprofit that helps aspiring entrepreneurs create jobs.