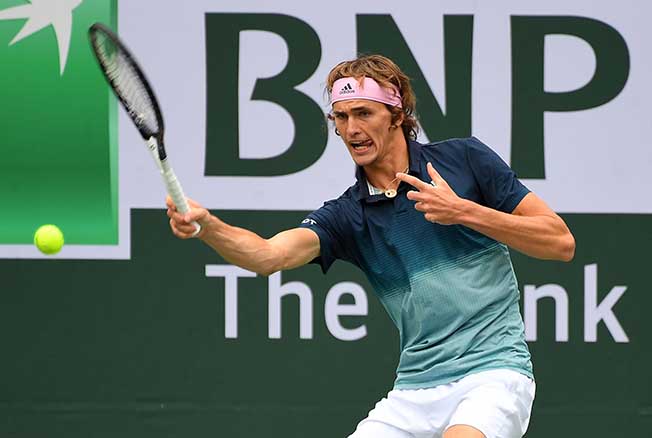 A sick Alexander Zverev was sent packing from the BNP Paribas Open with a 6-3 6-1 defeat by fellow German Jan-Lennard Struff in the third round at Indian Wells, California on Monday.

The night match between world number one Novak Djokovic, who is playing his first tournament since his Australian Open triumph in January, and Philipp Kohlschreiber was suspended with the top seed leading 1-0.

Struff saved all four break points he faced and took barely an hour to clinch his first career win over Zverev in five attempts.

“I have been sick for a week. That hasn’t changed unfortunately,” third seed Zverev told reporters. “I think I just got unlucky, got a virus somewhere and that’s how it is.”

Zverev lost to Nick Kyrgios in the final of the Acapulco tournament in Mexico nine days ago.

He said his main focus was to recover for the Miami Open that starts in Florida next week.

Next up for 55th-ranked Struff will be Canadian 13th seed Milos Raonic, who had his hands full before prevailing against American qualifier Marcos Giron 4-6 6-4 6-4.

“He came up with the goods and definitely pushed me to the brink there where I was getting a little bit frustrated,” Raonic told reporters after converting three of his 12 break points.

“I think I created a lot of chances and a few maybe I didn’t take the way I would have liked but he also stepped up well on his chances.

“I just kept missing opportunities. I could have drifted off a few times mentally.”

Giron rued what might have been after failing to capitalise on a winning position.

“Even though he’s a big favourite, it still hurts to lose, being up a break in the third,” said the world 217.

“He really stayed disciplined. He kept fighting and putting ball in the court and I made a few mistakes. I think he showed why he’s one of the best players.”

In the women’s draw, world number one Naomi Osaka powered into the fourth round after a 6-4 6-2 victory over Danielle Collins.

The 21-year-old Japanese had a shaky start when she was broken early in the first set but quickly found her groove and broke the American four times and struck 29 winners to advance.

The U.S. and Australian Open champion, who is also defending the title at Indian Wells, will next face Switzerland’s Belinda Bencic, who beat Ekaterina Alexandrova 6-4 6-2.

The duo were joined in the fourth round by seven-times Grand Slam champion Venus Williams, who defeated qualifier Christina McHale 6-2 7-5.

The 38-year-old Williams, who showed her mettle in the second round where she upset world number three Petra Kvitova, will meet unseeded German Mona Barthel in the fourth round.

“I feel definitely more comfortable going into that match than, for example, today,” Williams told reporters.

“I had never played McHale before, so you feel like you don’t really know what’s going to happen.

Earlier, Latvian 11th seed Anastasija Sevastova became the latest player to be stuck down with a viral illness at the tournament.

Sevastova was down 5-0 in the first set of her third round match with Estonian 21st seed Anett Kontaveit when she retired.

Her departure came less than 24 hours after Serena Williams was unable to continue her match on Sunday, also citing a viral illness.

Kerber took a while to warm to her task on a cool morning in the California desert.

“She was playing really fast and flat, so that was something I was not really expecting,” the German said of her opponent.

“I was trying to adjust, especially with my movement at the end of the first set and beginning of the second, and I think that was the key to coming back.”

Fifth seed Karolina Pliskova was not at her very best but still prevailed 6-3 6-2 over Ysaline Bonaventure.

“I felt somehow strange and the match was strange,” said Pliskova.