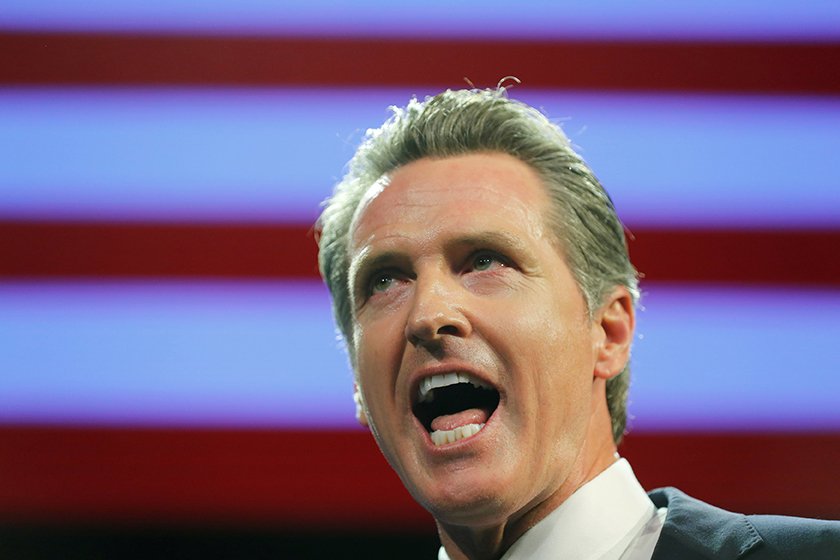 California Democratic gubernatorial candidate Gavin Newsom speaks after being elected governor of the state during an election night party in Los Angeles, California

California Governor Gavin Newsom will impose a moratorium on the state’s death penalty on Wednesday, granting reprieves to all 737 inmates on death row and closing the state’s execution chamber, an administration source said.

Newsom, who on Tuesday night hinted at a “major policy announcement,” plans to sign an executive order setting the changes in place on Wednesday morning at the state capitol, the source said. No death row inmates will be released, said the source, who declined to be identified.

California‘s death row is crowded with inmates, many of whom have been there for decades. Newsom is expected to say on Wednesday that he believes capital punishment to be costly and burdensome, and unevenly meted out to minorities and offenders with disabilities, the administration source said.

“I do not believe that a civilised society can claim to be a leader in the world as long as its government continues to sanction the premeditated and discriminatory execution of its people,” Newsom plans to say on Wednesday, in remarks seen by Reuters.

His order will withdraw California‘s lethal injection protocol, which has been challenged in court. It will not affect inmates’ convictions or their imprisonment, other than eliminating their death sentences, the source said.

“The moral leadership the governor is showing puts us in line with other countries and other states in terms of abolishing the death penalty,” she said.

Newsom does not have the power to overturn California‘s death penalty law, Kreitzberg said, but he can refuse to sign any death warrants and can commute death sentences to life imprisonment.

In some other states that have abolished the death penalty, the move away from capital punishment began with a governor who refused to sign death warrants, she said.

Newsom’s planned order drew criticism from some law enforcement groups, including the Association of Deputy District Attorneys, a prosecutors’ association.

“The voters of the State of California support the death penalty,” said ADDA president Michelle Hanisee, citing the 2016 failure of two ballot initiatives aimed at eliminating capital punishment, and passage of another in 2016 meant to speed up the process of approving inmates for execution.

“Governor Newsom, who supported the failed initiative to end the death penalty in 2006, is usurping the express will of California voters and substituting his personal preferences via this hasty and ill-considered moratorium on the death penalty,” she said.

California has not put an inmate to death since 2006, amid legal challenges to its execution protocols and discomfort with the sentence among political leaders. But prisoners convicted of murder continue to be sentenced to death in local courtrooms.

There are currently 737 people on death row in California – more than in any other state, the governor’s office said.

Cyprus bracing for a no-deal Brexit