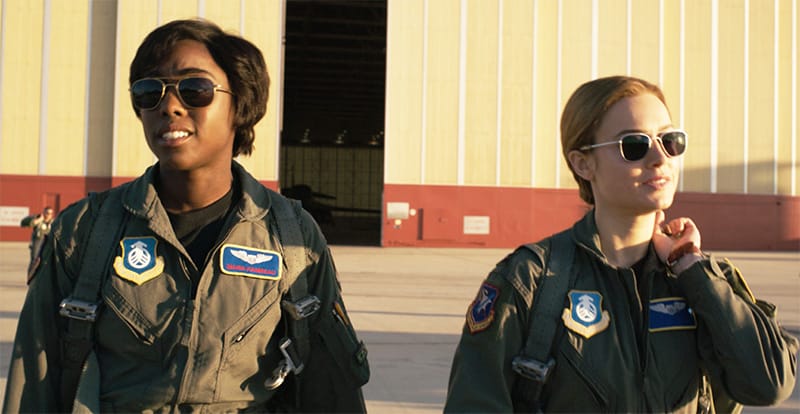 When the MCU (Marvel Cinematic Universe) films become so innumerable that quick tags are needed to tell them apart, Captain Marvel will be ‘The one with the cat’ – a feline sidekick named Goose, whose cat-video cuteness turns out to be deceptive. Or perhaps ‘The one most reminiscent of Power Rangers from a couple of years ago, mixing empowering Messages with 90s nostalgia’ – though Power Rangers flopped, so I can’t really see that catching on. For fans, of course, the shorthand is clear: Captain Marvel is the one that provides an origin-story of sorts for Nick Fury (Samuel L. Jackson, de-aged via digital magic) – and, more importantly, links last year’s Avengers: Infinity War with this year’s upcoming Avengers: Endgame, a hook-up that was met with whoops of delight at the screening I attended.

Comic-book fans are the best fans: they see evidence of a giant corporation’s 10-year plan – designed to have them forking over their cash again and again and again – and think of it as a ‘universe’ in which they can happily lose themselves. Personally I prefer standalone movies but I guess I’m stuck in the past, maybe circa 1995 or thereabouts – which is also when most of Captain Marvel is set, with a Kree warrior named Vers (Brie Larson) crash-landing on ‘C-53’ (a.k.a. Earth), prompting rather snarky nostalgia for Blockbuster Video, dial-up internet, and actual maps that you have to unfold in order to read them. Vers turns out to be an Earthling named Carol Danvers though she’s also, of course, Captain Marvel, able to shoot bolts of fire from her hands – an impressive superpower but a bit generic, like a lot of these Marvel hotshots. I wish they had weirdly specific powers, like the X-Men (remember Storm? controlling the weather?), instead of being reinforced action heroes.

Carol, of course, is an action heroine – and thereby hangs a tale, since Captain Marvel was a man in the comics. The film is a salvo in Hollywood’s culture wars, striking a blow for gender equality (online reaction has been mixed, as you might expect) – but, in trying to be meaningful, it becomes weighed down, and a bit confused. CM isn’t just about shooting bolts of fire; she must also control those powers, as explained by her Kree handler Yon-Rogg (Jude Law) – which in turn means controlling her emotions. “Nothing is more dangerous for a warrior than emotion,” chides Yon-Rogg, the film (unwittingly?) pushing the idea that to be emotional is to be ‘just like a woman’. An effort is made to broaden this slightly dodgy message in the second half – Fury says that going with our feelings is “what keeps us human”, as opposed to just female – but the climax has Carol, liberated from her Kree masters and a lifetime of being told she’s not good enough, charging into battle to the strains of No Doubt’s ‘Just a Girl’. Make of that what you will.

Larson, like Gal Gadot in Wonder Woman, doesn’t try to be mannish; her Amazon comes with a light touch, and there’s even a girly moment where she picks what Captain Marvel outfit to wear (the suit changes colours automatically) with the help of a feisty little girl who vies with the cat for Cutest Incidental Detail. Yet Captain Marvel lacks a certain oomph. As in Power Rangers, the pious message-mongering is the main event, leaving the action looking slightly irrelevant. There’s a memorable battle with the shape-shifting Skrulls, CM’s opponent constantly changing – now a surfer dude, now a sweet old lady – but that’s just the one scene. Fury’s role is increasingly thin, almost comic relief, doing crowd-pleasing Sam Jackson reactions to the alien shenanigans. There’s a third-act dramatic reversal. There’s a handful of Doctor Strange-ish, rather out-of-place trippy visuals (Carol in a chair with laser rays coming out of her ears, like Maria in Metropolis). There are jokes about grunge, and computers in the 90s taking ages to load.

Captain Marvel has ideas above its station. The directors, Anna Boden and Ryan Fleck, are not action directors; their previous films were rather earnest indies trading on strong performances (Ryan Gosling in Half Nelson, Ben Mendelsohn in Mississippi Grind). They were clearly brought in to work on the bigger themes – and Identity is indeed a recurring motif, Carol trying to figure out if she’s Kree or human (“Is that really who you are now?”; “I don’t know!”), also connecting, in a meta way, with a superhero who used to be a man, and is now a woman. “I made you a better version of yourself,” claims Yon-Rogg – and the film might say the same, though I reckon even fans are likely to relegate this likeable but distinctly average Captain Marvel to the outer reaches of the MCU. The cat is brilliant, of course.

Cyprus bracing for a no-deal Brexit