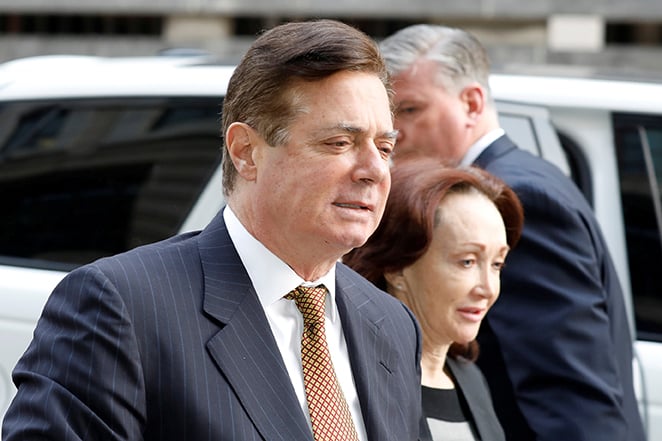 President Trump's former campaign chairman Paul Manafort arrives at a hearing at US District Court in Washington, US, January 16, 2018

President Donald Trump’s former campaign chairman Paul Manafort was sentenced on Wednesday to about 3-1/2 more years in prison for charges arising from Special Counsel Robert Mueller’s probe into Russia’s role in the 2016 US election, with the judge giving him a stern lecture about his lies and criminal behaviour.

The sentence of 73 months in prison imposed by US District Judge Amy Berman Jackson in Washington came six days after a different judge gave Manafort a lenient term of 47 months – just under four years – in prison in a separate case in Virginia, with credit for nine months he already has spent behind bars.

Jackson said 30 months of her sentence will run at the same time as the sentence in the Virginia case. That means the combined sentence will be six years and nine months.

Unlike at his sentencing hearing last week, Manafort said he was sorry for his actions, but Jackson then told him his expression of remorse rang hollow. Jackson told Manafort that he had lied repeatedly and committed fraud repeatedly, and there was no good explanation for the leniency he sought.

“Saying ‘I’m sorry I got caught’ is not an inspiring plea for leniency,” Jackson told Manafort, who was brought into the courtroom in a wheelchair because of a condition called gout.

Jackson sentenced Manafort, a veteran Republican political operative who earned millions of dollars working for pro-Russia politicians in Ukraine, for two conspiracy charges to which he pleaded guilty in September 2018 in Washington.

Manafort, 69, had not showed any remorse at his sentencing in his other case last Thursday.

“I am sorry for what I have done and for all the activities that have gotten us here today,” Manafort told Jackson on Wednesday.

“This case has taken everything from me already – my properties, my cash, my life insurance, trust accounts for my children and grandchildren, and even more,” Manafort added.

“The defendant’s insistence that none of this should be happening to him … is just one more thing that is inconsistent with the notion of any genuine acceptance of responsibility,” the judge told Manafort.

Jackson said at the outset of the sentencing hearing that she would not be influenced by last Thursday’s sentence imposed by US District Judge TS Ellis in Alexandria, Virginia, where Manafort was convicted in August 2018 by a jury for bank fraud, tax fraud and failing to disclose foreign bank accounts.

That 47-month sentence was two decades below the upper limit of federal sentencing guidelines, prompting criticism among some legal experts that it was too light.

Jackson could have given Manafort up to 10 years in prison in the Washington case – five for each of the two conspiracy counts.

Jackson ruled on Feb. 13 that Manafort had breached his agreement in the Washington case to cooperate with Mueller’s office by lying to prosecutors about three matters pertinent to the Russia probe including his interactions with a business partner they have said has ties to Russian intelligence.

Manafort wore a dark suit and tie to the hearing. At last week’s sentencing, Manafort wore a green prison jumpsuit emblazoned with the words “Alexandria Inmate” on the back.

In the Washington case, Manafort was sentenced for conspiracy against the United States, which included a range of conduct from money laundering to unregistered lobbying, and a second conspiracy count related to witness tampering.

During Wednesday’s hearing, Jackson ruled that Manafort should get a tougher sentence because he acted in a leadership role, directing others to participate in a crime. But Jackson said Manafort should get credit for accepting responsibility because he pleaded guilty to the conduct at issue, though he later breached his cooperation deal with prosecutors.

Mueller’s team did not make a specific recommendation on Manafort‘s sentencing in the Washington case. But prosecutor Andrew Weissmann said during the hearing that Manafort had engaged in an extensive cover-up that deceived the US government and the American public, and continued to try to undermine the investigation even after he pleaded guilty.

“Paul Manafort‘s upbringing, his education, his means, his opportunities could have led him to be a leading example for this country. At each juncture, though, Mr Manafort chose to take a different path,” Weissmann said.

“He engaged in crime again and again. He has not learned a harsh lesson. He has served to undermine, not promote, American ideals,” Weissmann added.

Jackson’s sentence may mark the end of a two-year-old legal battle between Manafort, a veteran Republican political operative who worked for Trump’s campaign for five months in 2016, and Mueller, who made exposing Manafort‘s covert lobbying for pro-Kremlin politicians in Ukraine a centerpiece of his Russia probe.

Manafort‘s lawyers noted that none of the Mueller’s charges against him related to the special counsel’s core mandate: collusion between Russia and the Trump campaign.

“But for a short stint as a campaign manager in a presidential election, I don’t think we’d be here today,” Manafort lawyer Kevin Downing told Jackson, and asked her to take media coverage of the case into account in determining the sentence.

Manafort started his statement to Jackson by saying that his statement before Ellis last week did not adequately reflect his contrition.

Trump has not ruled out a presidential pardon for Manafort, and after last week’s sentencing said “I feel very badly” for his former aide. A pardon might not, however, end Manafort‘s legal troubles.

The Manhattan district attorney’s office is pursuing criminal charges against Manafort, a person familiar with the matter told Reuters last month. The charges, which originate from unpaid state taxes, could not be erased by a presidential pardon, which are only applicable to federal crimes.

Mueller is preparing to submit to US Attorney General William Barr a report on his investigation into whether Trump’s campaign conspired with Russia and whether Trump has unlawfully sought to obstruct the probe. Trump has denied collusion and obstruction and Russia has denied US intelligence findings that it interfered in the 2016 election in an effort to boost Trump.

No banned books in north says Akinci, after politician’s arrest

New movement to stand for ‘all Cypriots’ in Euro elections