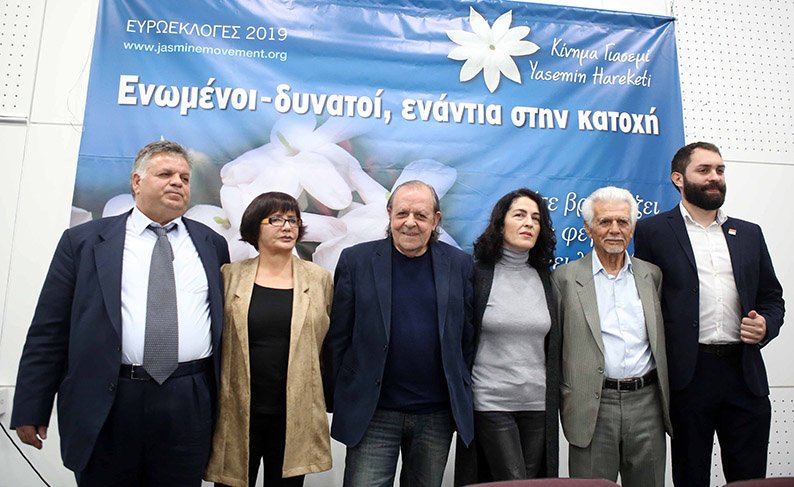 Candidates for the Jasmin Movement with Sener Levent third from left

The Jasmin Movement on Wednesday presented its six Turkish Cypriots candidates who will run for a seat in May’s European Parliament elections.

The Afrika daily’s publisher and journalist, Levent, said that they are not running as Turkish Cypriots but as Cypriots, citizens of the Republic of Cyprus, “who condemn the Turkish occupation”.

He said that the Jasmin Movement’s candidates are running in the elections to reveal what is truly going on in the north. While in the Republic the European acquis is in place, in the north, the same is true for the Ankara acquis, he said.

Levent said that the island has been under Turkish military occupation since 1974 which has now become a political occupation as well because the systematic population transfers from Turkey have made Turkish Cypriots a minority.

He said that settlers from Turkey outnumber Turkish Cypriots by five to one.

“We face the risk of settlers becoming locals and locals being left without a country, while the plundering of Greek Cypriot property that was forcibly taken with guns in 1974 continues,” he said.

As regards the Cyprus problem, he said that leaders and political parties failed so far to take serious steps toward a solution and peace.

Some examples, he said, is the perpetuation of the issue of missing persons, the fact that the two leaders never visited together a mass burial site, that Varoshia had not opened and that war criminals were never tried.