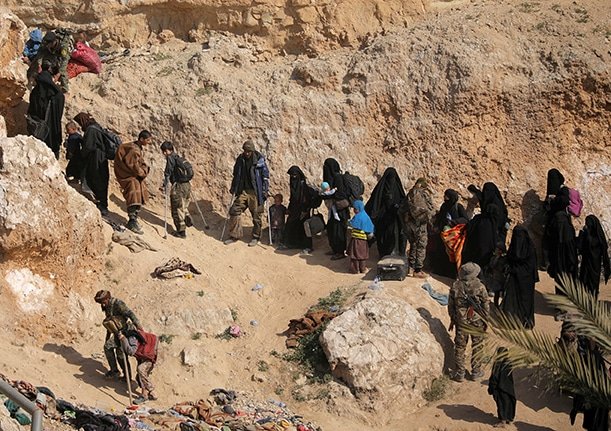 Islamic state fighters and their families walk as they surrendered in the village of Baghouz, Deir Al Zor province

The SDF on Tuesday said the battle for Baghouz, a collection of hamlets and farmland near the Iraqi border, was as good as over.

The enclave is the last shred of populated territory held by the jihadists who have been driven from roughly one third of Iraq and Syria over the past four years.

Mustafa Bali, a spokesman for the SDF media office, said its forces had been bombarding Baghouz heavily overnight before engaging in direct clashes with IS fighters from 4-6 am (0200-0400 GMT).

Live footage broadcast by the Kurdish Ronahi TV overnight showed a series of large explosions lighting up the night sky over Baghouz.

“There were suicide vest attacks by a group of bombers who tried to blow themselves up amidst our forces. Our forces targeted and killed them before they reached our positions,” Bali said.

The SDF has laid siege to Baghouz for weeks but had repeatedly postponed its final assault to allow thousands of civilians, many of them wives and children of Islamic State fighters, to leave. It resumed the attack on Sunday.

Around 3,000 fighters and their families surrendered to SDF forces in 24 hours, Bali said overnight. Three women and four children belonging to the Yazidi sect, a minority group who were kidnapped and enslaved by IS in 2014, were also freed, he said.

While Baghouz is the last populated territory of what was once the group’s self-proclaimed “caliphate”, fighters still operate in remote areas elsewhere.

The group put out a new propaganda video overnight Monday filmed in recent weeks inside Baghouz, insisting on its claim to leadership of all Muslims and calling on its supporters to keep the faith.

“Tomorrow, God willing, we will be in paradise and they will be burning in hell,” one of the men interviewed in the video said.

Cost of Vassilikos port to rise due to increased demand