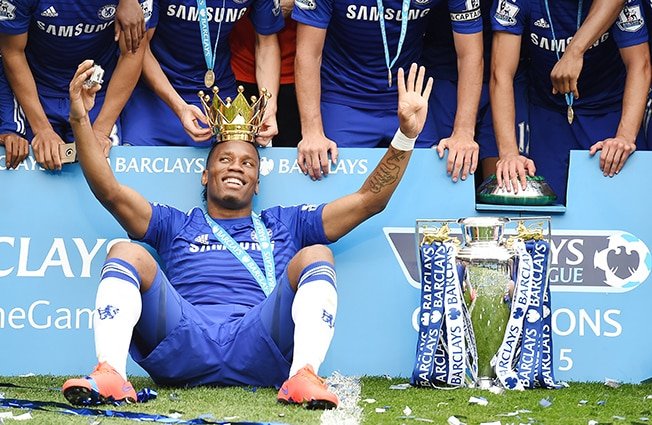 Didier Drogba won both the Premier League and Champions League with Chelsea. The Ivorian is now deputy head of independent organisation Peace and Sport

Former Chelsea superstar Didier Drogba will be among those attending a bicommunal ‘Friendly Football Day’ on Tuesday in the mixed village of Pyla, organised by independent organisation Peace and Sport and the Stelios Philanthropic Foundation.

The highlight of the day will be a friendly football match between the Greek Cypriot football team Nea Salamina, founded in Famagusta in 1945, and Turkish Cypriot Magusa Turk Gucu FC.

The game will be only the second of its kind in 64 years. Since 1955, the Greek and Turkish Cypriot teams have played in separate competitions.

The last such match was in March 2005 when Nea Salamina and Yenicami teams played together in Famagusta.

The event is part of the organisation’s ongoing efforts to use sport as a tool for diplomacy and dialogue around the world, the announcement by Monaco-based Peace and Sport said on Thursday.

Peace and Sport founder Joel Bouzou and Drogba, deputy head of the organisation, will be attending the game along with Sir Stelios Haji-Ioannou, the British-Cypriot easyJet founder, entrepreneur and staunch supporter of bicommunal efforts.

Political leaders from the Greek and Turkish Cypriot communities are also expected.

The event, organised with the support of the European Commission, the European Parliament and UK- based non-profit organisation Eleven Campaign, will be marked by the launch of the worldwide digital campaign #WhiteCard, cultural activities and football and karate workshops led by champion for peace and three-time Karate World Champion Laurence Fischer.

“We are very excited to organise the ‘Friendly Football Day’ because it will bring together Greek Cypriot and Turkish Cypriot teams, fans, families and children. This event will also demonstrate the diplomatic power of sport bringing high-level leaders and diplomats for dialogue and cooperation. The universality and neutrality of sport can help to forge ties between divided communities,” Bouzou said.

“We are glad to partner with Peace and Sport for this historic event promoting lasting peace and dialogue on the island of Cyprus,” said Sir Stelios.

“We believe that sport can bring people together and we offer bicommunal awards to teams comprising one Turkish Cypriot and one Greek Cypriot. This Friendly Football Day will be the opportunity to promote respect and cooperation through sport.”

There will be strict security measures in place and the event is by invitation only. Diplomats and their families have been invited.

Peace and Sport is actively engaged in the promotion of sport diplomacy events. Last year, the organisation helped to bring together North Korea and South Korea athletes in mixed teams at Liebherr 2018 World Team table tennis championship and the PyeongChang 2018 Olympic winter games.