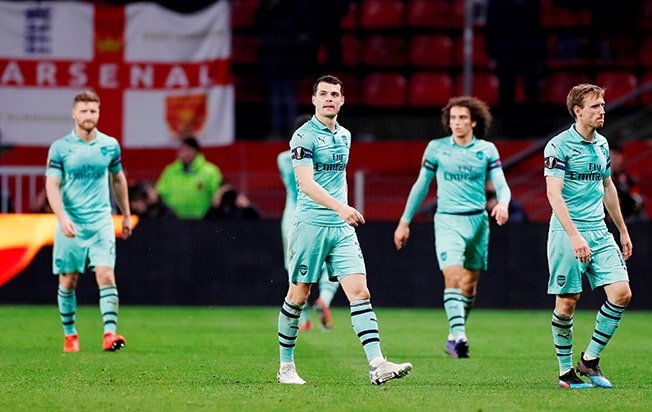 The Gunners welcome their French opponents to the Emirates on Thursday trailing 3-1 from last week''s Europa League last 16, first leg

Arsenal manager Unai Emery knows only the best will be good enough to see his side progress past Rennes in the Europa League.

The Gunners welcome their Ligue 1 opponents to the Emirates Stadium on Thursday trailing 3-1 from last Thursday’s first leg.

They will be forced to mount a second-leg recovery for the second round in a row after they overturned a deficit against BATE Borisov in the round of 32, and Emery is calling on his side to show their best.

“We are very demanding of ourselves,” Emery said. “For us, it’s one positive issue because we want to play big matches, tough matches against the best teams – and in the Europa League we are finding some results like the last round against BATE Borisov with difficulty.

“This round is the same with a bad result in the first match and for us it’s a tough match tomorrow.

“But our demands to get our best performance is in each training and each match, very high.

“Tomorrow is one match. We need to be together and create a big atmosphere in the Emirates with our supporters to help us to do the best performance possible in 90 minutes.

“We need to play with high emotion with our supporters but taking decisions on the pitch cleverly with our mind.

“These are both important issues that we need to control over 90 minutes and maybe more. We want to control but we want to build on the game because this result is giving us one long match tomorrow.”

The Gunners will be boosted by the return of Alexandre Lacazette, whose three-game ban has been reduced to two by UEFA, making him available for the Emirates clash.

Midfielder Lucas Torreira, who also returns from a domestic suspension, hopes the presence of the Frenchman can help fire the Gunners through.

The Spaniard said: “We all know how important Alex Lacazette is to us as a group and obviously the more players we have available the better it is because we do have some quality players, particularly in midfield and up top.

“Hopefully we will be able to make that danger pay. Let’s just hope that Lacazette can help us to achieve the result tomorrow.”

Arsenal will assess Henrikh Mkhitaryan’s back injury ahead of the game.

Mkhitaryan missed Sunday’s Premier League win over his former club Manchester United but trained on Wednesday and will have a check before the game.

Sokratis Papastathopoulos is suspended, though, after his red card in last week’s loss.

Despite their two-goal deficit, Emery’s side are still favourites to progress, but the Spanish manager is aware his side will need to control their emotions, pointing to those red cards to Lacazette and Sokratis.

“I don’t think about it (being favourites),” he said. “I only want to play the best possible match, doing all we can, with each player and the team.

“In the first 90 minutes they beat us and tomorrow we will want to show here it can be different, but with a big respect to them and also knowing we need all the players with the focus and to control our emotions and control the different situations and scenarios that can come in the 90 minutes.

“This is our way and our match for tomorrow.”