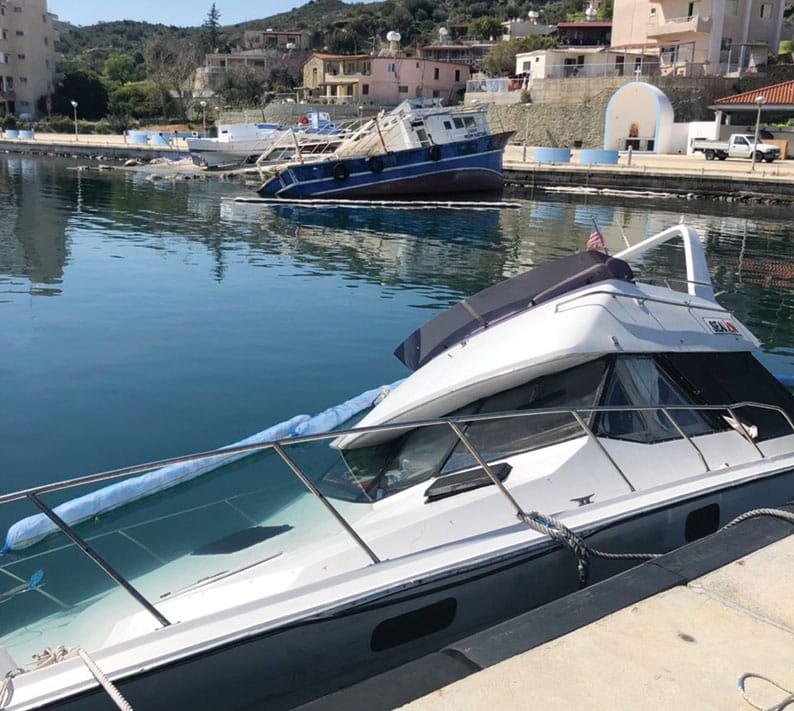 KATO Pyrgos community council has expressed deep concern after a second boat from those that had carried Syrian refugees and had been seized by authorities sank at the local harbour causing marine pollution.

The council have been trying for over a year to have six vessels docked at the Kato Pyrgos harbour removed but to no avail.

The vessels, that were carrying refugees who arrived in the area over the past two years, are stuck in the harbour as evidence until the prosecutions of the suspected people-smugglers are finished. After that, the government will auction them off.

One of them,  Nedim Kaptan, docked at the harbour since November 2017 when it was towed by Cypriot authorities with some 170 mostly Syrian refugees onboard, was already listing after being damaged during towing.

The last straw however was the sinking of a second vessel on Thursday morning causing petrol and motor oil spill in the sea.

“The spill floated on the water and drifted off the harbour to the open sea,” Kato Pyrgos’ deputy community leader, Christos Socratous told the Cyprus Mail.

With the tourist season fast approaching, he said, the coastal resort cannot afford polluted beaches and a negative image.

“Many people visit the harbour, this gives a negative impression,” he said, referring to the abandoned vessels. “They are a pollution on their own, inside there are clothes, shoes, lifejackets you name it.”

Socratous said the community council, after contacting several state services and being fobbed off from one office to another, don’t know what else to do.

The community council had posted last summer a sign in front of Nedim Kaptan explaining why the vessel was there and apologising for the unsightly scene.

“It has since been abandoned here and despite the actions of the community council, police and the justice ministry refuse to remove it because it is ‘evidence’,” the sign had said. It was removed however, after authorities had reassured the town that all vessels would soon be auctioned off.

Last September, after receiving promises from authorities, Kato Pyrgos community leader Nicos Kleanthous told the Cyprus Mail that it was possibly a matter of days for the vessels to be removed.

Nedim Kaptan is still there, along with five others, including the one that sank on Thursday.

Our View: Public sector payroll creeping back to unaffordable levels