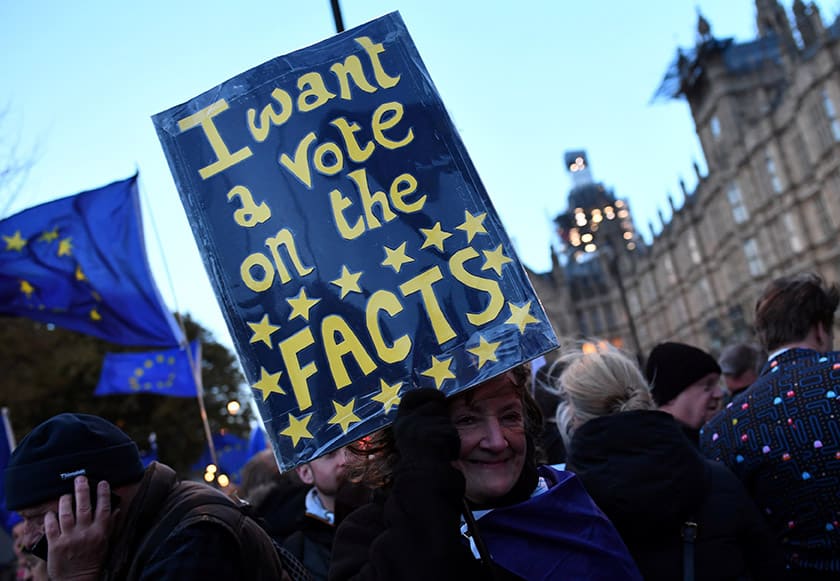 Prime Minister Theresa May’s deputy warned lawmakers on Friday that unless they approved herBrexit divorce deal after two crushing defeats then Britain’s exit from the European Union could face a long delay.

The United Kingdom’s divorce from the EU has sown chaos through May’s premiership and the Brexit finale is still uncertain with options including a long delay, exiting with May’s deal, a disorderly exit without a deal or even another referendum.

The British parliament voted overwhelmingly on Thursday to seek a delay to the March 29 exit date enshrined in law.

May says she wants to minimise any delay to just three months, but to achieve that she will need parliament to back her deal at the third time of asking early next week.

In essence, May has handed Brexit supporters an ultimatum – ratify her deal by March 20 or face a long delay to Brexit way beyond June 30 that would open up the possibility that the entire divorce could be ultimately thwarted.

May’s de-facto deputy, Cabinet Office Minister David Lidington, said he hoped the United Kingdom would leave in an orderly fashion but if May’s deal was not approved then a long extension was on the cards.

“You don’t just have a short, technical extension to our membership of the European Union you almost certainly need a significantly longer one to find a time for parliament to come to a majority verdict,” he told BBC radio.

“I hope that MPs (lawmakers) of all parties will be over this weekend reflecting on the way forward,” Lidington said, adding the legal default was that the United Kingdom would leave on March 29, unless something else is agreed.

EU leaders will consider pressing Britain to delay Brexit by at least a year to find a way out of the domestic maelstrom, though there is shock and growing impatience at the political chaos in London.

“There is professional bewilderment that the motherland of common sense is in this place,” one European diplomat said.

The Withdrawal Agreement for Britain’s departure from the EU is the only deal on offer, Dutch Prime Minister Mark Rutte said on Wednesday after meeting EU President Donald Tusk, referring to the deal May agreed with Brussels after two-and-a-half years of negotiation.

Brexit will pitch the world’s fifth largest economy into the unknown and opponents of the divorce fear it divides the West as it grapples with both the unconventional U.S. presidency of Donald Trump and growing assertiveness from Russia and China.

Supporters of Brexit say while it may bring some short-term instability, in the longer term Britain will thrive if it moves away from what they cast as a doomed experiment in EU integration that is falling behind global powers such as the United States and China.

May’s deal, an attempt to keep close relations with the EU while leaving the bloc’s formal structures, was defeated by 230 votes in parliament on Jan. 15 and by 149 votes on March 12.

An often chaotic set of votes in parliament this week has shown that none of the alternatives – such as leaving with no deal, a referendum or allowing parliament to decide how to leave – can muster a majority among lawmakers yet.

Now May wants a third go.

But she must win over dozens of Brexit-supporting rebels in her own Conservative Party and the Northern Irish Democratic Unionist Party (DUP) which props up her minority government.

A senior government source said persuading the DUP would be key to securing parliament’s approval, as that would prompt eurosceptic Conservatives to back the deal.

Rebels have accused May of botching the negotiations with Brussels and surrendering on the backstop – an insurance policy which sets out what happens to the Irish border if the sides fail to find another solution.

Many Brexiteers fear the backstop, aimed at avoiding controls on the border between the British province of Northern Ireland and EU-member Ireland, will trap the United Kingdom in the EU’s orbit indefinitely.

Brexit-supporting lawmakers have rejected an additional legal opinion by the top government lawyer on assurances given by the EU on May’s divorce deal, The Telegraph reported.

If they reject May’s deal again next week Brexit goes down to the line.

The next major event would likely be the March 21-22 EU summit, and if a deal was not approved then parliament would be given an opportunity to vote on a way forward after the summit.

Opponents of Brexit hope another referendum will eventually become the only way out of the deadlock.

Nearly three years since the 2016 Brexit referendum – in which Britons voted 52-48 percent to leave the EU – polls suggest no great desire for a second referendum and indicate that many voters, fatigued by the political squabbling, would be happy to leave without a deal.

Britain, EU dig in their heels in trade talks