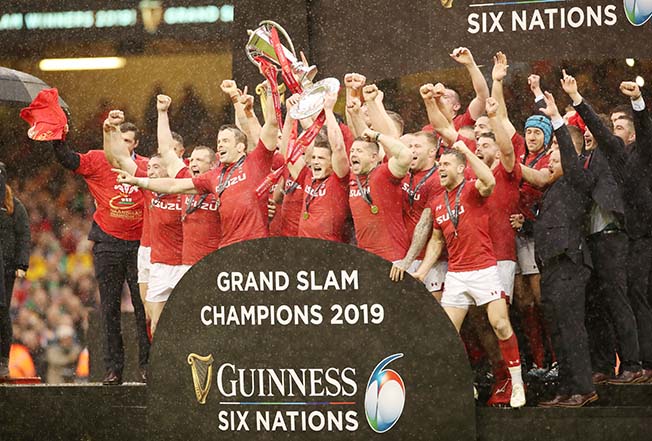 Wales hammered Ireland 25-7 on Saturday to claim a first Six Nations Grand Slam since 2012, with Gareth Anscombe bagging 20 points in an unexpectedly one-sided clash at the Principality Stadium.

The hotly anticipated match between the pre-tournament favourites Ireland and form team Wales never looked close, as man of the match Anscombe punished a stream of Irish infringements with his goal kicking in the swirling rain.

Welsh centre Hadleigh Parkes scored his side’s only try after barely 80 seconds had been played, collecting a deft Anscombe chip, while Ireland’s Jordan Larmour left it until the final minute to bag an opening score that would have been scant consolation.

Between those two tries Wales dominated throughout, leaving the jubilant home crowd chanting the name of their triple Grand Slam-winning New Zealander coach Warren Gatland in his final Six Nations game with the side.

“Anything can happen when you work hard and you’re a proud nation. Warren is the man at the top, he’s unwavering and unflappable. We’re going to miss him when he’s gone,” said Wales captain Alun Wyn Jones.

“It’s hard to put into words,” Anscombe added. “Obviously we just have a habit of winning. ..It’s a special group and we work very hard for each other.

“Of course we felt pressure but we wanted to enjoy it.”

The Welsh win leaves England unable to catch up even if they beat Scotland later on Saturday, and will stoke hopes of a serious Wales tilt at this year’s Rugby World Cup, which kicks off in Japan in September.

Wales, who claimed their Grand Slam without registering a bonus point, built their victory on a stubbornly physical defence and accurate breakdown that let them retain possession through multiple phases of attack.

They went into European rugby’s top competition ranked behind Ireland and a rapidly improving England, but overcame the latter 21-13 on February 23 with a suffocating second-half defensive effort that gave a foretaste of the more thorough battering awaiting Ireland in Cardiff.

Ireland struggled throughout a first half in which they failed to register a single point, unable to sustain any possession and punished with Anscombe kicks for every mistake.

World player of the year and fly-half Johnny Sexton became increasingly frustrated at Ireland’s error-strewn performance and some of the decisions of referee Angus Gardner.

He can rarely have had a worse afternoon in an Ireland shirt, kicking out on the full when he meant to find a teammate, failing to orchestrate several mis-firing back line moves and, in one second-half instance, throwing a pass directly into touch.

It was an enervated, uncharacteristically imprecise performance by the men in green, who will now face questions over whether their imperious form of recent years is dipping just as the World Cup approaches.

Ireland captain Rory Best said the poor start had hurt his side, adding: “We just couldn’t get a footing in the game. Our set-piece wasn’t up to the standard we expect.

“We have to go away and address why we lost… We have been a little bit inconsistent in this Championship… it’s very disappointing.”

It is Wales’s fourth Grand Slam of the Six Nations era.

The afternoon began on a sombre note of commemoration for the victims of a mass shooting in New Zealand on Friday, both teams standing shoulder to shoulder for a minute’s silence in the rain under the open roof of the Principality Stadium.

The roof had been a point of pre-game controversy after Ireland enforced a rule that lets the visiting side decide whether to retract it, but the decision backfired as Wales coped much better with the conditions throughout.

Russia says it will respond to new EU sanctions

‘Problems not solved by voting down budgets’