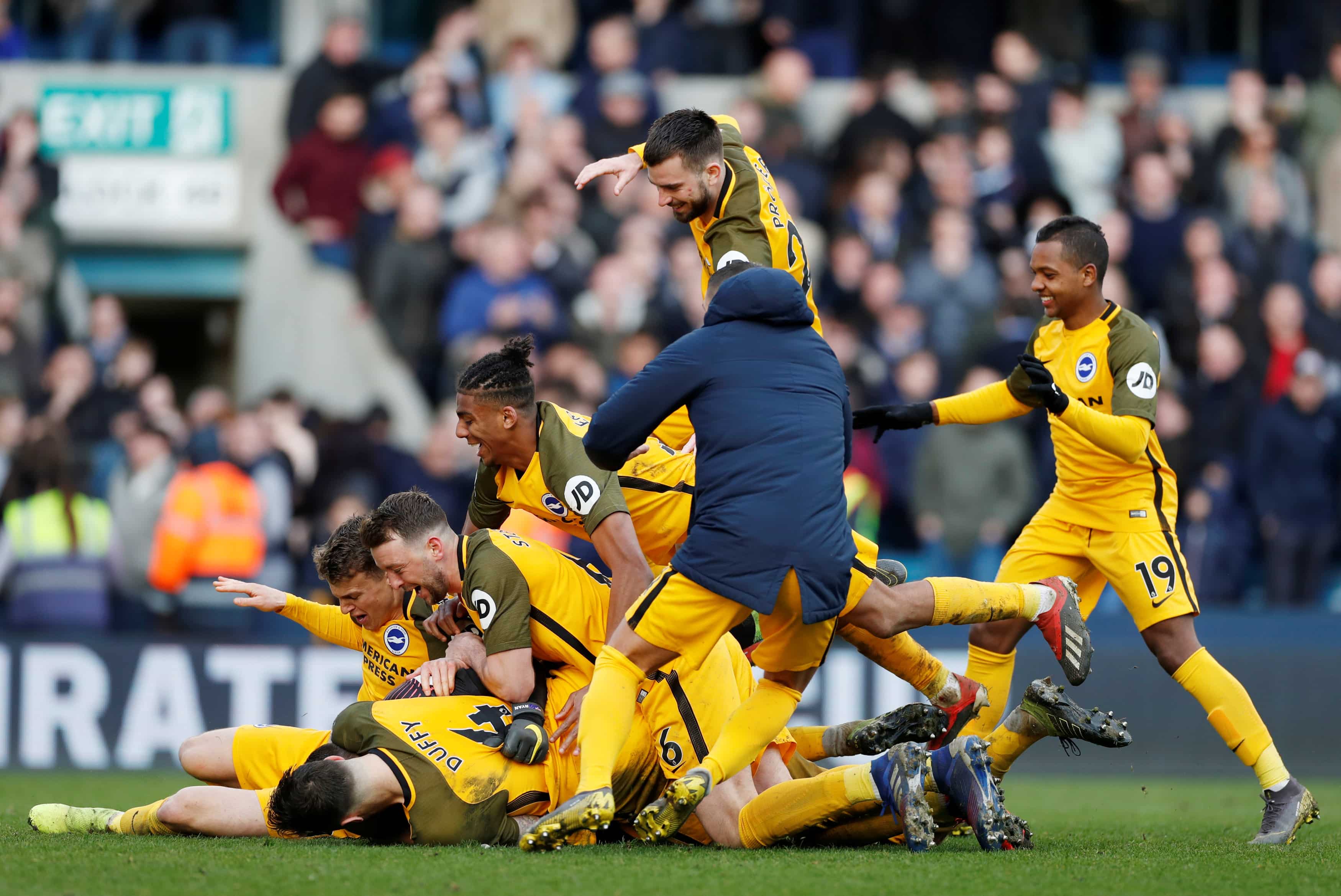 Brighton and Hove Albion reached the semi-finals of the FA Cup, beating Championship side Millwall 5-4 in a penalty shoot-out on Sunday, after clawing their way back into the game to draw 2-2 from two goals down with only two minutes remaining.

Millwall defender Jake Cooper smashed his side’s final penalty over the bar at the sudden death stage of the shoot-out, after Brighton striker Glenn Murray had hit the crossbar and Millwall’s Mahlon Romeo had seen a spot-kick saved by Mat Ryan.

It is the first time since 1983 that Brighton have reached the FA Cup semi-finals, where they will meet Premier League leaders Manchester City, with Watford meeting Wolverhampton Wanderers in the other last-four game.

Chris Hughton’s side hauled themselves back into the game after Millwall, who are 20th in the Championship and fighting relegation to English soccer’s third tier, took a deserved 2-0 lead in a raucous atmosphere at The Den, where Millwall had knocked out Everton earlier this season.

“The first word that comes to mind is character,” the Brighton coach told a news conference.

“At 2-0 down you’re out of the competition but I felt we could get one back with the balance of play, to get two back in that last period shows character, then missing the first penalty and they score three shows real character and composure.”

Central defender Alex Pearce struck the opening goal in the 70th minute with a towering header from a corner and Neil Harris’s side doubled their lead with a sliding finish from Ireland international Aiden O’Brien in the 79th.

That looked to have sealed Millwall’s path to Wembley as fans chanted “Manchester City we’re coming for you” but substitute Jurgen Locadia gave Brighton a fighting chance with a powerful finish in the 88th.

Brighton levelled with the help of a goalkeeping howler from David Martin, who fumbled Solly March’s hopeful cross from a free kick into the net in time added on.

Millwall’s Shane Ferguson was sent off in the penultimate minute of a tense period of extra time, with both sides reluctant to take risks after a punishing 90 minutes.

Locadia had a goal ruled out for offside just before the end of extra time, though video replays showed it should have stood.

The penalties were taken in front of the Brighton fans but Millwall drew first blood when Murray hit the bar. Ryan then turned away Romeo’s penalty.

Dale Stephens and Lewis Dunk scored their spot-kicks but Cooper crumbled under the pressure, sending his shot into the stands to the delight of Brighton’s visiting supporters.

“I feel for Dave Martin, he was excellent throughout the game but he made a slight error of judgement that has cost us. I’m most proud of the way my team played, our running ability, we were better than Brighton and that’s what I’m most proud of.”

The draw for the FA Cup semi-finals was made following the game and is as follows:

The semi-final ties will take place at Wembley Stadium on April 6 and 7. The final is scheduled for May 18.

Neophytou: time for a real dialogue on what a state broadcaster should be