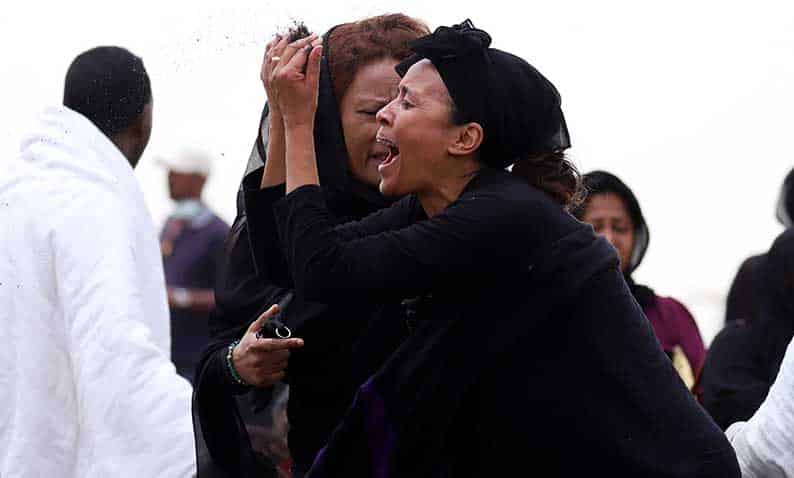 A relative carries soil in her hands as she mourns at the scene of the Ethiopian Airlines Flight ET 302 plane crash, near the town Bishoftu, near Addis Ababa, Ethiopia March 14, 2019. REUTERS/Tiksa Negeri

The crash of Boeing Co’s 737 Max 8 passenger jet in Ethiopia raises the chances that families of the 157 victims, even non-US residents, will be able to sue in US courts, where payouts are larger than in other countries, some legal experts said.

Sunday’s crash occurred five months after the same model of the plane went down in Indonesia, an accident that prompted a string of US lawsuits against Boeing by families of the 189 victims.

While no lawsuits have yet been filed since the crash of Ethiopian Airlines Flight 302, some plaintiffs’ lawyers said they expect that Boeing will be sued in the United States.

The company, which has its corporate headquarters in Chicago, has often convinced US judges to dismiss air crash cases in favour of litigation in the country where the evidence and witnesses are, usually where the crash occurred.

That allows the company to avoid US juries, which can award hefty punitive damages to accident victims for wrongful death, emotional suffering and economic hardships of surviving family.

Boeing may have a tougher time with that strategy after the Ethiopian crash, some legal experts said.

This is partly because eight US citizens died and because plaintiffs could argue that liability hinges on system design and safety decisions made by Boeing executives since the Lion Air crash in Indonesia.

“Now with two crashes with a brand-new aircraft, what Boeing did in the intervening five months is more relevant, and that all happened in the United States,” said Daniel Rose, a lawyer with Kreindler & Kreindler, a firm that represents air crash victims and their relatives.

The causes are still unknown, but both involved a relatively new 737 Max 8 aircraft that crashed within minutes of takeoff and experienced sudden drops in altitude when the aircrafts should have been steadily climbing.

This has raised fresh questions among regulators about a digital anti-stall system known as Manoeuvring Characteristics Augmentation System, or MCAS, designed specifically for the Max to offset the extra lift from larger engines mounted on its low-slung frame.

In a March 4 court filing in litigation over the Indonesia crash, Boeing asked the judge to limit all discovery in the case to issues of forum, or which country the cased belonged, and said it planned to file a motion to dismiss the lawsuit.

While potential plaintiffs may name Ethiopian Airlines as a defendant in any lawsuits, the focus on the 737 Max 8 anti-stall system makes Boeing a likely target of litigation, some lawyers said.

Arthur Wolk, an attorney who represents plaintiffs in air crash litigation and said he has been contacted by a potential plaintiff over the Ethiopian Airlines crash, said Boeing would likely face claims for strict liability. That means they could face an allegation of having sold a product that was inherently defective and dangerous.

Plaintiffs will also claim Boeing failed to exercise reasonable care in designing planes or failed to inform flight crews about how the planes operate, Wolk said.

Rose, the lawyer for passengers, said two accidents so close together will put the focus of any lawsuits on the Ethiopian crash on how Boeing tried to address problems with its MCAS system after the Lion Air crash.

“Were there other efforts by Boeing to essentially minimise the problem or hide the scope of the problem?” Rose asked. If lawyers can show Boeing management acted recklessly, it could clear the way for substantial punitive damages, he said.

Some lawyers who have worked on the other side of such cases are less sure about Boeing’s potential liability.

Kenneth Quinn, a lawyer who represents airlines and manufacturers, said he thought Boeing had a good chance of getting both sets of US cases dismissed on forum grounds.

He said the trend in US courts was in Boeing’s favor.

In November, a federal judge in Washington, DC dismissed a case against Boeing and other defendants stemming from the disappearance of a Malaysian Airlines flight in 2014 because the presumed crash had a stronger connection to Malaysia than the United States.

In 2011, a federal judge in Los Angeles dismissed 116 wrongful death and product liability cases against Boeing over the 2008 crash of a Spanair jet on a domestic flight in Spain, where the judge determined the cases should be heard.

If the company has to defend US cases, it would likely argue that claims against it are preempted because the FAA had approved the plane’s design, said Justin Green, a plaintiffs lawyer.

While manufacturers in the past have enjoyed broad protection under the Federal Aviation Act, a decision by the 3rd US Court of Appeals has called into question whether manufacturers can rely on preemption when they could have easily submitted changes to the FAA for approval.