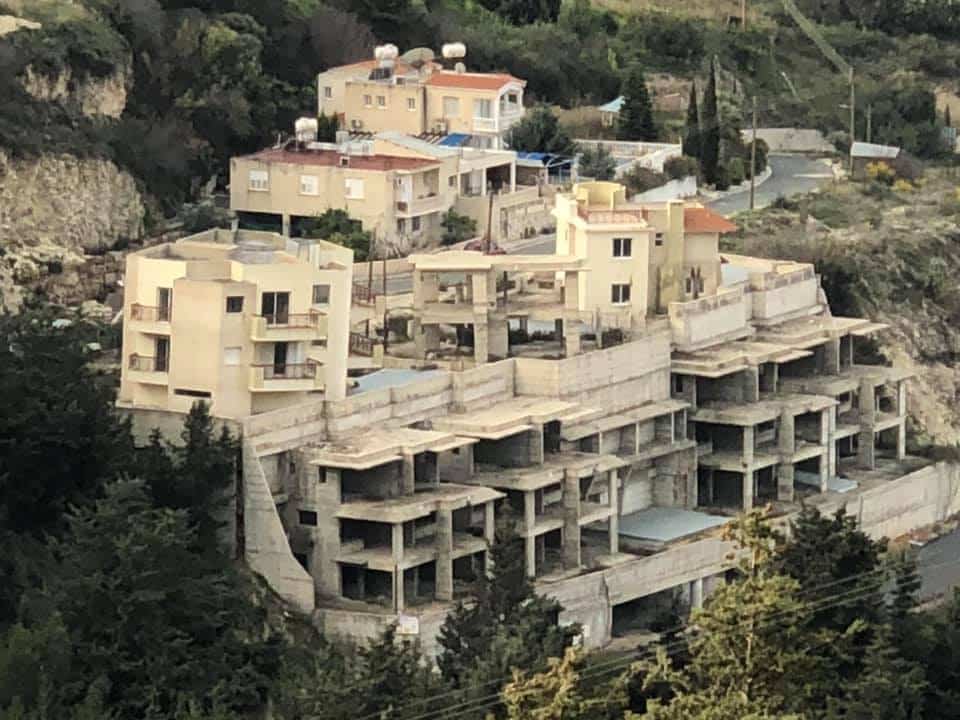 A stricken Tala building development located just above a busy road in Paphos is sliding down a hillside faster than ever following this winter’s heavy rainfall.

Residents and local officials are concerned that the buildings could come crashing down onto the road below – the main access road in and out of Kamares village – causing injury or even death.

“In the last two weeks there are dramatic, visible changes in the buildings and the road surface,” Kamares resident Irina Yakimovitch told the Sunday Mail. “A 60cm crack is now apparent between the development and a wall, two of the buildings are massively tilted and the road has huge ripples in it. There are two cracks in the road, one is about 15 cm wide. There is a huge wave in the road creating humps, this means that the building is moving fast.” The development, which consists of 14 units – four apartments, two villas and eight townhouses, (the latter still a concrete skeleton) – is the subject of a legal wrangle which saw the Paphos District Office (PDO), the responsible body, apply to court for a demolition order for the buildings in February 2016.

The request failed because of legal procedures and technicalities, according to Mary Lambrou, the Paphos District Officer. The PDO has appealed this result, which is now before the Supreme Court.

Tremetoushiotis Developers Ltd – operating under the umbrella of Top Cyprus Properties – were responsible for the construction of the development, but have said that they would never have gone ahead with construction if they had been aware that the land was ‘problematic’ to build on.

All of the necessary permits and licenses were issued for the project prior to construction, although Lambrou said that some building permit stipulations were not followed, such as retaining walls were constructed too high, at four metres instead of two.

All residents and owners were forced to leave after authorities deemed the properties unfit for habitation.

“We are monitoring the situation closely. There is no direct risk to public safety at the moment, but there is a later risk. This is the opinion of our civil engineers and others,” Lambrou told the Sunday Mail.

She said that in addition to the PDO civil engineer, a private civil engineer is carrying out an independent study of the development, which will be examined by an ‘ad hoc’ committee consisting of three civil engineers in the coming days. The committee will oversee any additional safety measures.

“We expect a decision from the supreme court by the end of this month or the beginning of April,” Lambrou said.

She explained initial meetings were held between the developers and the PDO where suggestions were made to demolish the top half of the property, leaving the bottom part which at the time had little damage.

“The developers decided not to cooperate with us. However, they did make arrangements with the property buyers to compensate them and we have not received any complaints about that,” she said.

As well as waiting for a decision from the court another avenue is open to the authorities said Lambrou.

“There is a clause in the streets and buildings law if there is danger to the public, then we can proceed ourselves (to demolish) after a notice to the owners. In case there are expenses, we could then sue the developers to recover our costs,” she said.

Local Tala councillor Cathi Delaney has written to Lambrou to raise concerns about the condition of the buildings and the effect on the road.

“There are assurances from the District Office engineers and other officials that if the building is going to slip there will be drastic changes before any slippage occurs. If the building reaches this stage, the road in front will be closed and traffic diverted,” she said.

“There is regular monitoring of the property and everyone is concerned that the wet winter has taken its toll on the property,” she said. “The deterioration is obvious.”

Kamares resident Rowena Moore has lived in the area for 25 years and drives past the crumbling development daily. She said changes to the buildings and road in the past couple of weeks have been swift.

“It concerns me what is happening under the road. The splits in the buildings are getting wider and the entire project could end up crumbling onto the road. Sooner or later someone will end up injured or worse. If there was an earth tremor, it could all come tumbling down.”

On Thursday, Tala council decided to temporarily close the road for a couple of days while machinery removes large pieces of rubble that has been washed down the hillside in heavy rain.

“The road will reopen next week and this work is not connected with the buildings that are built on the hillside,” community leader Areti Pieridou told the Sunday Mail on Friday.

Our View: Refugees have woken up to their true situation too late