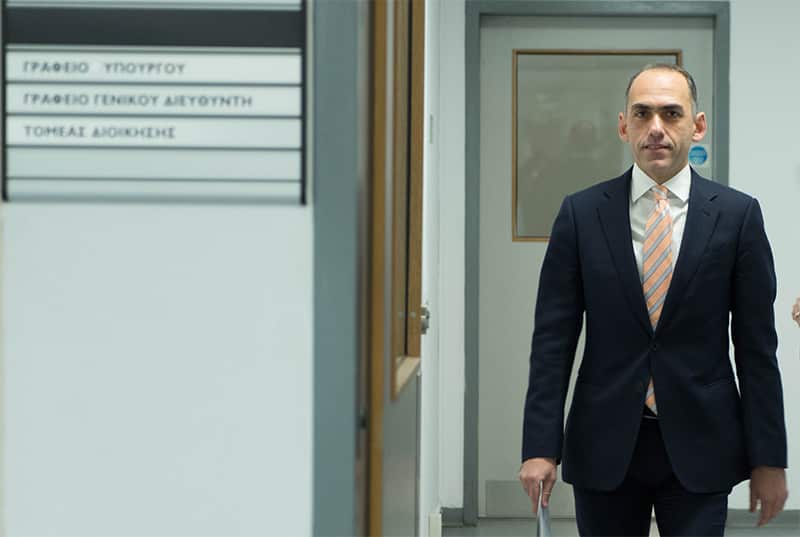 IN THE END, despite his defiant assertion that he would not sacrifice Iphigenia, also known as Harris Georgiades, the finance minister, Prez Nik did exactly that but on his own terms.

He did not carry out the ritual himself but gave his Iphigenia the freedom to choose when and how he would sacrifice himself. On Friday Harris called a news conference and announced he would be leaving his post at the end of the year because seven years at the finance ministry was enough for him. He had always planned to go, he said, and his decision had nothing to do with the co-op bank report that concluded his responsibilities for the collapse were severe.

The night before the announcement of Iphigenia’s self-sacrifice, Prez Nik denied the minister had any political responsibility. He could not accept that “because three (members of the investigative committee) decided without substantiating what they say, in order to safeguard institutions, Iphigenia must be sacrificed.”

After all, in this instance, the seer Calchas had not advised a human sacrifice, the Gods of Olympus were not angry about the collapse of the co-op bank as they did not consider it sacred. Nik may have been finally swayed by the gods of Diko, Akel and the media, all of whom considered the co-op bank sacred and threatened Nik with the full force of their righteous wrath if he did not sacrifice Iphigenia.

Now all that remains to be seen is whether the Gods of Olympus will intervene just before the scheduled sacrifice and replace him with a deer.

YOU ALMOST felt sorry for the bungling commies of Akel who did everything they could to force a Mari-style popular reaction to the collapse of the sacred co-op but failed. They even announced a protest march of Akel satellite organisations in Limassol, calling on comrade sheep to meet outside the Limassol co-op building. We do not know whether it went ahead.

Ethnarch Junior took a different line, threatening not to play with the government in the legislature if Harris was not removed from his post. The principled deputies of Diko, including those with NPLs at the co-op banks like Zacharias Koulias, would not vote for any government bill if Nik failed to go ahead with the sacrifice of Iphigenia, warned an indignant Junior.

It would go against Diko’s high ideals and principles to back a government that lacked the political ethics to get rid of the minister, declared by the investigative committee as being politically responsible for the collapse of the sacred co-op. We shall see whether Junior is satisfied with the deferred resignation arranged by the crafty Nik.

We still do not know whether the arrangement met the high ethical standards set by the holier than thou Odysseas, who was on a noble mission to destroy Harris long before the co-op fiasco. Last Sunday in an interview in Phil, the self-appointed guardian of our political ethics lamented the lack of political sensitivity. In Sweden, he said, a minister resigned for drinking “two glasses of wine instead of one” after she was found driving over the limit.
If this were Sweden the co-op bank would not have €7 billion worth of NPLs.

PUBLICITY-MAD Odysseas has now taken it up himself to investigate the NPLs and debt write-offs at of politically exposed persons (PEPs) that banked with the co-op. This was announced on Friday by his official mouthpiece Phil, which he told that when dodgy dealings were found the cases would be referred to the attorney-general for further action.

Is investigating which PEPs have NPLs part of the official duties of the auditor-general or has he decided to expand his responsibilities to areas in which publicity points can be won? Perhaps AG Costas Clerides, whose name Odysseas invariably uses to legitimise his actions, should inform him that he is auditor-general and not investigator-general of everything and everyone he chooses.

Why would Odysseas inform the AG about the NPLs of the co-op? From what we know not repaying your loan is not a criminal offence. If it were, half the population of Kyproulla would be behind bars. The truth is that Odysseas will investigate because he knows he will receive glowing personal publicity for this.

What is the role of the AG in all this? Clerides said his office would go through the investigative committee’s report and if criminal responsibilities were found action would be taken. So where does Odysseas’ investigation fit into all this? Does he not trust Clerides’ staff to do a good job and has decided to carry out the investigation himself?

THE NAMES of two deputies with NPLs at the co-op bank were made public this week – Disy deputy Costas Constantinou and Diko’s super-patriotic Zacharias Koulias, who will be standing in the elections for European parliament in May. Koulias attacked Politis, which carried the report, on the grounds that it made the revelation because it was involved in a legal battle with him.

As regards the NPL, with arrears of 300 grand, of the company in which Koulias was a partner, he said that his business had fallen on hard times like thousands of Cypriots, and could not make repayments. He had not received favourable treatment he said, although the bad debt had not yet been restructured. The bad debt was on the path to restructuring he claimed.

This may explain why Koulias has decided to stand in the elections for European Parliament. If elected he will more than double his income and be able to repay his loan. How sad it would be for our legislature to lose one of its sharpest minds to Strasbourg over a bad debt.

WHO WOULD have thought that even the headbanger nationalists of Elam would get out of doing National Guard service? Leader Christos Christou got out of doing service because of an aye problem, party spokesman Geadis Geadis was exempted because of serious head injuries suffered during a clash of football hooligans and Nicosia district leader Giorgos Hadjioannou was exempted for unknown reasons.

When even top Elamites engage in draft dodging what hope is there for the country? When our most committed patriots get out of doing military service who can we rely on to defend the Republic against the expansionist designs of the hated Turk? Elamites are prepared to die for their country defending the nation’s ideals and values but not on the battle front.

Meanwhile the extremist nationalists of Edek and Solidarity, who have lost many supporters to the fascists, have tried to exploit the draft-dodging news in the hope of winning back some of them, especially with elections on the horizon. Both issued self-righteous announcements lambasting the hypocrisy of the fascists.

It is a wonder that in all these years neither Edek nor Solidarity found anything to criticise the fascist party about, except the draft-dodging of its leaders. Could this be because they have no political differences?

FAMAGUSTA mayor Alexis Galanos on Thursday rubbished the official propaganda that our side has been using for the last 45 years to explain the failure to agree a settlement of the Cyprob. Galanos spoke about the Greek Cypriot ‘deep state’ that does not want a settlement and was in a position to influence decisions every time there were talks.

Until Galanos’ revelation on Thursday we all believed that the failure to reach a settlement was the exclusive responsibility of Turkey’s intransigence, which is an unchanging factor in the talks. Was this not what Prez Nik said in explaining the collapse of the Crans Montana conference and repeated another hundred times since then? Perhaps Turkish intransigence is an invention of the ‘deep state’.

Do we really have a deep state in Kyproulla that operates independently of the nation’s political leadership? It is the country’s political leadership (Tassos, Tof, Nik) that has always had an aversion to a settlement – because of Turkish intransigence – of course, so there was never a need for the intervention of the deep or shallow state.

SPEAKING of Turkish intransigence, I hear the godfather of hardline rejectionism ambassador Tasos Tzionis will be taking over as permanent secretary of the foreign ministry, that could qualify as the deep state, always fighting to maintain a toxic climate between the two sides and thwarting any attempts at confidence-building on the grounds that it would lead to an upgrade of the pseudo-state.

Tzionis will replace Minas Hadjimichael (no relation to Hadji-Mike) who will be posted to an embassy. Some saw the arrival of the arch-rejectionist Tzionis, who served as Ethnarch Tassos’ henchman, as further proof of Prez Nik’s transformation into the new Tassos.

The truth is that Nik has more than enough anti-settlement hawks around him, from foreign minister and Mrs Christodoulides to the government spokesman, not to need anyone else. Foreign ministry gossip is that Tzionis has come back as perm sec because this would give him a bigger pension when he retires in a year or two. A perm sec receives a higher salary than an ambassador and he would therefore be entitled to a bigger monthly pension on retirement.

It is the least Tzionis deserves after a career devoted to ensuring Turkish Cypriots did not get a share of the foreign ministry’s top posts or the Republic’s embassies.

UNION bosses are Kyproulla’s biggest reactionaries, opposing all changes unless these involve more money and benefits for their members. Predictably, CyBC unions voiced strong objections to the government decision to stop the corporation taking advertising. The revenue lost would be covered by an extra €2.5 million added to the CyBC’s 2019 budget by the government.

Union representatives came up with the most colossally stupid argument to oppose the government decision. They said that not having advertising would affect the CyBC’s independence! This idiotic claim was also repeated at a House committee meeting by the reactionary progressives of Akel. In the rational world, the opposite is true – operating without advertising makes a news medium much more independent. Having no fear of alienating or offending potential advertisers ensures independence.

Having realised the stupidity of their objection the unions changed tack at a meeting on Wednesday, called to discuss the no-ad crisis. The five unions issued an announcement saying, “advertising of products and services constitutes briefing of the citizen, as a consumer, and as information it is within the framework of the role and mission of Rik [CyBC].”

What about the viewers, who would be more than happy to watch a TV station that has no ads? Has nobody told the wise leaders of the unions that as soon as ads come on, 99 per cent of viewers switch to another channel to avoid them?

Who’s the real target of politician’s arrest in north?

Our View: Refugees have woken up to their true situation too late