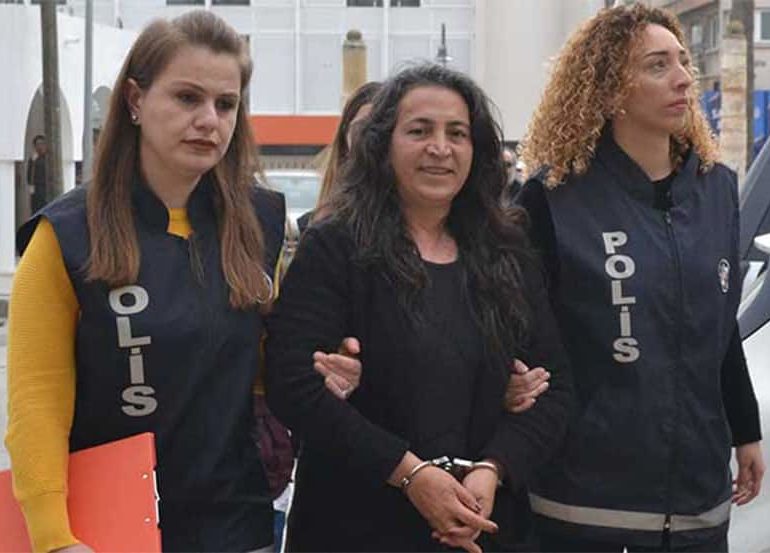 The 48-year-old Bengul Garginsu, who is of Kurdish origin and has been living in Cyprus for almost 30 years, and her daughter were released on Thursday pending the outcome of the trial. They are banned from leaving the country.

The only ‘evidence’ police found at the house of Garginsu were books by some Kurdish politicians and writers including Selahattin Demirtas and Gulten Kisanak, and Turkish journalist Ahmet Sik. Police also took from Garginsu’s house a chest decorated with a star, which they claim resembles the symbol of PKK – the Kurdistan Workers’ Party, which is outlawed in Turkey and in the northern part of Cyprus.

All the books found at Garginsu’s house are readily available in bookstores. Although it was previously reported that a book by the imprisoned militant Kurdish leader Abdullah Ocalan was also found in Garginsu’s possession, it later emerged that this was incorrect.

The charges are based on the Penal Law, an ancient colonial law dating back to 1933, which stipulates that anyone in possession of a publication of an illegal organisation is considered a member of that organisation until proven otherwise.

Meanwhile, some reports emerged after the arrests that police essentially went after Garginsu and her daughter in connection with graffiti they allegedly inscribed in support of a Kurdish lawmaker, Leyla Guven, during the march on International Women’s Day in Nicosia last week.

Garginsu’s lawyer Urun Solyali, who spoke to the Sunday Mail, confirmed the allegations.

“It’s true,” said Solyali. “The leading motivation for the police was a banner or graffiti.” Solyali stated however that police did not make any claims before court regarding the content of the banner or graffiti. The only charge brought in connection with it was “intentional damage” to property, he said.

Leyla Guven of the pro-Kurdish People’s Democratic Party HDP has been on a hunger strike for more than 125 days over the prison conditions of Ocalan. Many March 8 International Women’s Day demonstrations throughout Turkey witnessed messages of support for Guven.

Many Turkish Cypriots, including opinion leaders, politicians, journalists and lawyers protested the detentions, questioning how possession of books could be linked to terrorism and expressing concern about basic rights and freedoms in the northern part of Cyprus.

“There is increasing concern among our people that the freedoms are being restricted,” said Akinci. “It should never be forgotten that violence does not grow in environments of freedom and democracy but of oppression and authoritarianism… Establishing a direct relationship between terrorism, violence and book readership is creating a huge distortion in people’s perception of freedom.”

While some see this move by the police, which is under the ultimate control of Turkish military chief of staff in Ankara, as a stark message to the Kurds living in Cyprus, who enjoy a relatively free climate to express themselves, others believe the message is to CTP and to the Turkish Cypriot community as a whole.

The incident is especially embarrassing for CTP since it is the senior partner of the ruling coalition. Garginsu is a member of CTP’s Party Assembly, which is the party’s administrative organ, as well as the administrative board of the Nicosia district.

“This incident may constitute a message to Kurds to be careful ahead of Newroz celebrations; to CTP to not mingle so much with Kurds; to the Turkish Cypriot people that they may be declared members of a terrorist organisation any time if they are not careful,” said senior researcher Mete Hatay at Peace Research Institute Oslo PRIO’s Cyprus Centre.

“And it is not really possible to separate one message from another and say ‘this’ is the reason. But one thing is clear: This is aimed at intimidation. And it is a sign that the democratic, tolerant, pluralistic environment that has prevailed in the north despite all the problems and challenges, is under threat.”

Unlike Turkey, there are no political prisoners or imprisoned journalists in the northern part of Cyprus. “This is a sign that all this may change unless people show strong resistance,” Hatay said.

This is not the first time police in the northern part of Cyprus have detained Kurds – mostly students and workers – for possession of certain books or even listening to certain songs.

“However, it is the first time a Turkish Cypriot citizen has been arrested, and this is why alarm bells are ringing,” said Hatay. “Everyone is questioning how far things will go.”

Tales from the Coffeeshop: Sacrifice on Prez Nik’s own terms