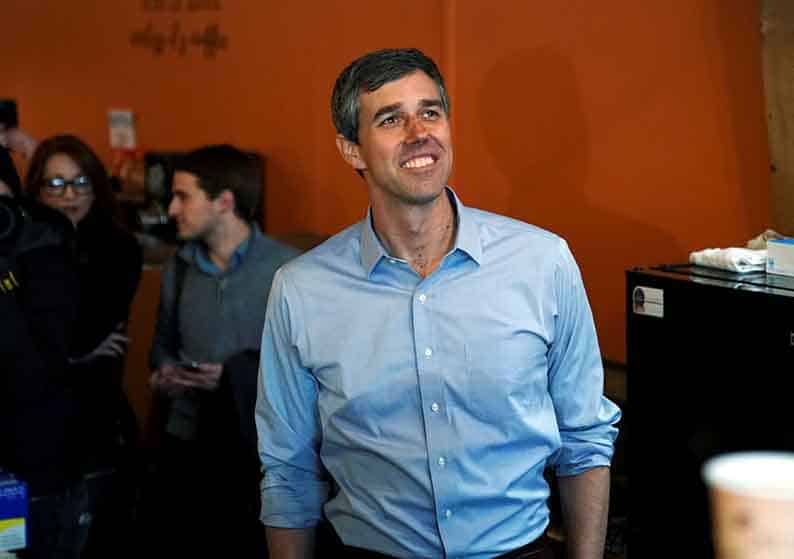 As he had done at several stops in his first campaign trip as a presidential candidate, Beto O’Rourke on Friday climbed atop a counter at a local Iowa business and addressed a small but adoring crowd. People clapped and cheered. Outside, some waited in the cold, hoping to catch a glimpse of him.

By that measure, his tour across eastern Iowa last week was largely a success. But by no means was O’Rourke considered a front-runner. And that underscored the challenge he faces as he competes for the 2020 Democratic nomination.

O’Rourke, a former three-term US congressman from Texas, became a celebrity last year when his longshot bid to unseat US Senator Ted Cruz drew national attention and a torrent of money. But ultimately, his fame was not enough.

That loss led some critics to wonder why someone who couldn’t secure a Senate seat would then think he should run for president.

That is not his only obstacle. O’Rourke, 46, is a wealthy, white man from a conservative-leaning state who is more moderate on several key issues than many of his competitors. Given the energy among progressives in the early stages of the race and the diversity of the Democratic field, O’Rourke would appear to be everything that many in party say they do not want.

More than a dozen Democrats have declared their candidacy to take on President Donald Trump in next year’s election, including six women. US Senator Kamala Harris of California would make history as the first black woman to gain the nomination. Julian Castro, a former secretary of the Department of Housing and Urban Development, would be the first Hispanic to do so. Another contender, Pete Buttigieg, the mayor of South Bend, Indiana, is openly gay.

O’Rourke also must grapple with the enduring popularity of US Senator Bernie Sanders, a progressive who remains a formidable adversary after battling Hillary Clinton in 2016, and former Vice President Joe Biden, who is weighing a presidential bid.

Even so, none of them are on the cover of the latest issue of Vanity Fair, as O’Rourke is. His interview with the magazine sparked controversy on social media last week when he said he was “born” to run for president. Critics also found fault with his oft-repeated joke on the trail about how he “helps” raise his three children with his wife, Amy.

To his detractors, it smacked of white male privilege. O’Rourke grew up affluent, attended the Ivy League’s Columbia University, and married the daughter of a real estate baron. His estimated net personal wealth is more than $9 million.

His image in his race against Cruz, however, belied that background. He fashioned himself as the scrappy underdog, a former punk rocker who was battling the establishment, visiting every county in Texas in a Dodge minivan and holding numerous town halls where he fielded questions from the public.

It was a strategy he took to Iowa last week, going so far as to rent another Dodge minivan that he drove himself and shooting a fundraising video on Facebook of him filling its gas tank.

O’Rourke differed from many of his liberal competitors by talking frequently about how he worked with Republicans in Congress to improve care for veterans in his home town of El Paso, Texas. Asked whether he was a true “progressive,” he referenced President Theodore Roosevelt, a Republican.

O’Rourke maintained that his campaign would be relentlessly optimistic – and he only rarely rebuked Trump. “We will not belittle or demean or vilify other candidates,” he said in Mt. Vernon. “We will not define ourselves in contrast to others or say who we are against.”

His policy positions were largely nonspecific. He championed universal health care, immigration reform and combating climate change, but largely said any reforms would have to be pragmatic and incremental.

Occasionally, O’Rourke showed self-awareness of his status as a wealthy, white male, telling crowds that he had been given opportunities denied to minorities and describing the US economic system as imperfect and racist.

He also found that despite the media attention he has received, he was not a household name in Iowa. “I didn’t even know who he was until two days ago,” said Sam Jennison, the owner of the bar in Mount Vernon where O’Rourkeheld his event.

But for the most part, those who attended his events spoke of him glowingly and dismissed concerns about whether he was progressive enough. “Issues are very important,” said Cathryn Layer, 65, of New London, Iowa. “Winnability is another thing.”

“We need a moderate Democrat, and we probably need a white male because that is not threatening to a lot of people,” said Holly Manon Moore, 65, of Fairfield, Iowa, who said she is undecided in the race and would want a person of color to be the vice-presidential nominee. “If we go too far left, we’re going to lose.”

At the close of his Iowa trip, it remained unclear how O’Rourke‘s entrance would reshape the Democratic race. He notably declined to reveal how much money he raised in his first few days as a candidate.

But he did have an impact. At the same time O’Rourke was in eastern Iowa, so was one of his competitors, US Senator Amy Klobuchar of Minnesota. And while the size of the crowd that came to see her on Saturday was comparable to those at O’Rourke‘s events, there were far fewer journalists present.