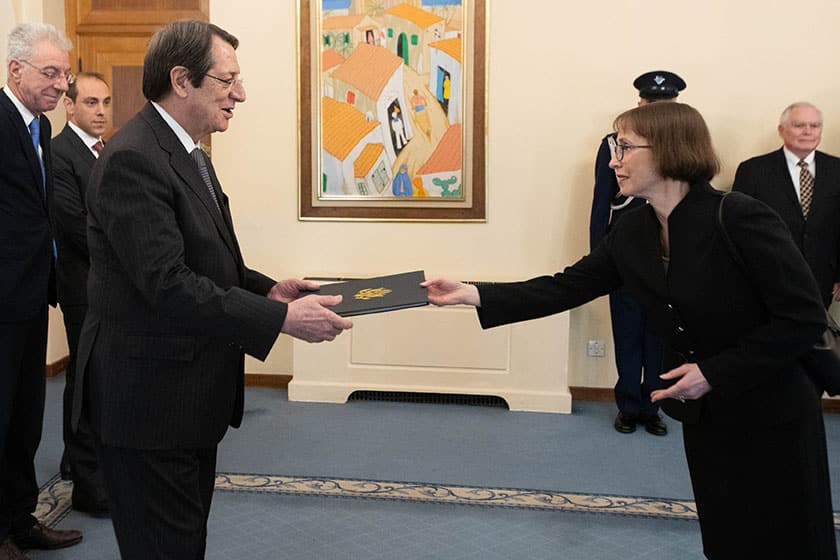 Washington believes the bilateral security partnership between the US and Cyprus will grow deeper and stronger, its new ambassador to the island Judith Gail Garber said on Monday.

The comment comes as Cyprus is hoping for a strong signal from the US during the trilateral Cyprus-Israel-Greece summit in Jerusalem on Wednesday, which will be attended by US Secretary of State Mike Pompeo, that Nicosia would indicate to Turkey Washington’s support for the island’s gas plans.

Garber described it as “an exciting time” in US-Cypriot relations.

“The interests of Cyprus and the United States in the Eastern Mediterranean – at the crossroads of Europe, the Middle East and Africa – have become increasingly aligned, and the Republic of Cyprus is a valued friend and important strategic partner in this critical region,” she said.

With the signature of the Statement of Intent by Assistant Secretary of State Mitchell and Foreign Minister Nicos Christodoulides last year, the bilateral security partnership “will surely grow deeper and stronger”, she added.

On the economic front, both countries could improve trade and investment ties as Cyprus diversifies its economy and strengthens its banking regulations.

“The new energy discoveries come with great promise and equally great responsibility. The United States has consistently recognised – in public and in private – the right of the Republic of Cyprus to develop the resources in its Exclusive Economic Zone. We continue to believe these resources should be equitably shared between both communities in the context of an overall settlement. These finds can and should lead to the greater prosperity and stability of the entire Eastern Mediterranean region and help diversify Europe’s energy supply,” Garber said.

She added that the US also continued to support efforts by the two leaders in Cyprus, facilitated by the UN, to reach a political settlement that will reunify the island as a bizonal, bicommunal federation. The US, Garber said, supported the resumption of direct negotiations as soon as possible.

In response, Anastasiades said the involvement of American companies, ExxonMobil and Noble, in the exploitation of Cyprus hydrocarbon reserves marked a new era in bilateral relations, “one that will serve towards tightening the economic and commercial links between our two countries, as well as towards expanding our investment ties and our cooperation in the fields of energy and energy security”.

It was also a tangible sign of trust in the “reliable and stabilising role” Cyprus has assumed in a volatile region and its efforts to substantially contribute to enhancing energy security for the country, the neighbourhood and the EU.

“I strongly believe that the above also serves our joint vision of transforming the Eastern Mediterranean into an energy hub that would contribute to the region’s stability, through the diversification of energy sources and routes,” he said.

The new Bulgarian ambassador to Cyprus Lyubomir Todorov, also presented his credentials on Monday, speaking of a political dialogue that was “active and fruitful”.

“The Bulgarian standing on the Cyprus issue stays integral and consistent. We expect the achievement of a fair, comprehensive and viable settlement of the Cyprus problem within the UN framework, in accordance with the relevant UN Security Council Resolutions and in line with the principles on which the European Union is founded,” he said.

Anastasiades in his address, referred to the Bulgarian community of 30,000 who live and work in Cyprus, which, he said “enriches the cultural fabric of the Cypriot society and contributes to the Cypriot economy”.

Erdogan: ‘You will not turn Istanbul into Constantinople’