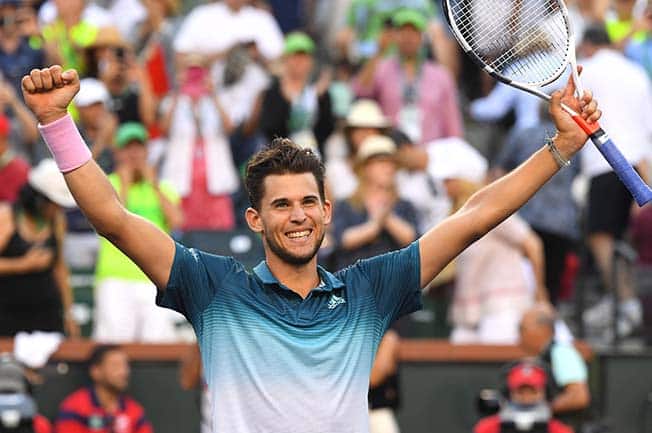 Dominic Thiem claimed his first Masters 1000 title after coming from a set down to defeat Roger Federer 3-6 6-3 7-5 and win the BNP Paribas Open on Sunday in Indian Wells.

Momentum swung in Thiem’s favour in the deciding set when he smacked a forehand winner down the line to break Federer and take a 6-5 lead.

The Austrian fell on his back and covered his face with his hands when Federer, who had been bidding for a record sixth Indian Wells title and 101st tournament victory, netted on match point.

The 25-year-old Thiem, who will rise four places to a career-high world number four on Monday, paid tribute to his opponent.

“It is such a pleasure to compete with you, to learn so much from you, and to play with one of the biggest legends of all time,” he told the 20-times Grand Slam champion during the trophy presentation ceremony.

“I feel like it’s not my right to congratulate you, you have 88 more titles than me, so I’m just hoping you play more and we can have some other big finals,” he said with a laugh.

Federer was gracious in defeat after falling in the final in the Southern California desert for a second consecutive year.

“It has been a great week for me even though it didn’t work out today,” he said.

“What a great week for Dominic. Wonderful playing at the very end and throughout the week. You deserve it.”

Federer raced to an early lead, winning the first three games before wrapping up the first set in the Southern California desert.

But baseline specialist Thiem kept his composure and levelled the match in the second, gaining traction by extending rallies and unleashing a torrent of high-kicking serves to keep Federer off balance.

Federer’s own serve lost some of its bite in the crucial game in the third set with the score tied at 5-5.

“The game he broke me I didn’t serve very well, so I think he took advantage of that fact,” said Federer, who was not overly down about the defeat.

“Really there is no reason to get down. Plus there is more to look forward to in Miami.”

Thiem will also play in Miami, hoping to complete the “Sunshine Double” with a victory there after his Indian Wells win.

Andreescu overcame a troublesome right shoulder and used creative and aggressive shotmaking to defeat the German on a hot and sunny day in the Southern California desert.

The 18-year-old dropped her racket and fell on her back when Kerber hit a backhand into the net to deliver the tournament wildcard the biggest win of her young career.

With the win, Andreescu, who was ranked 152 at the end of last season, is expected to reach the WTA top 30.

Latest road victim ‘would have lived had he worn seatbelt’ (Updated)

McIlroy wins Players Championship for first title in a year