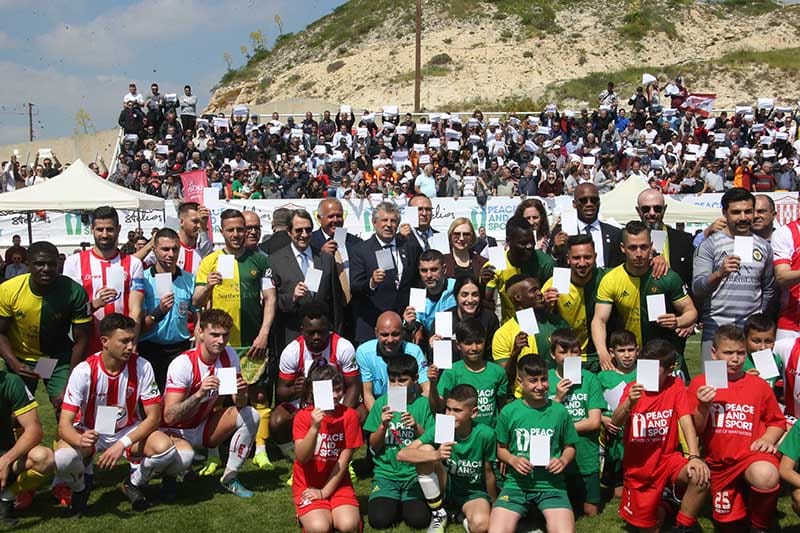 President Nicos Anastasiades on Tuesday said that despite any differences with Turkish Cypriot leader Mustafa Akinci, they both share a common vision for achieving lasting peace, stability and prosperous collaboration in the island.

In his address at a bicommunal football game in Pyla between Greek Cypriot Nea Salamina Famagusta and Turkish Cypriot Magusa Turk Gucu FC, Anastasiades expressed hope that the island’s two communities would very soon live once again the same good moments they used to enjoy in the past.

Akinci was also expected to be at the event but announced at the last moment he would not attend because it would take place in the government-controlled part of the village and not within the buffer zone as he was initially told. The two leaders had been invited to attend by the organisers of the event, the Peace and Sport Organisation and Stelios Philanthropic Foundation. Former Chelsea superstar Didier Drogba was also present as well as the French Olympic champion and president and founder of Peace and Sport Joel Bouzou.

Head of the United Nations Peacekeeping Force in Cyprus, Elisabeth Spehar, was also there.

Upon his arrival at the football pitch, Anastasiades declined to comment on Akinci’s refusal to attend.

“I prefer to watch a sports game aiming at improving the climate, and be reminded of the good old days when our teams had no problem playing each other,” Anastasiades said.

Akinci later in the day cited unequal treatment and failure by the UN to take the necessary security measures for the match to take place within the buffer zone.

The first half of the match ended 1-0 in favour of Nea Salamina. A second goal was scored in the second half when players of both teams played on the same side.

The event, he said, fully adheres to these ideals, demonstrating that sports can be a valuable tool in promoting dialogue, cooperation and understanding between our two communities.

“I am not here for a political speech but to send a strong message of hope and peace to both communities and the younger generations,” he said.

He said that it was originally planned for his “dearest friend Mustafa Akinci to attend in order for both of us to send this common message.”

For the well-known reasons, he said, Akinci failed to attend. “Despite any differences we may have with my friend Mustafa, he and I share a common vision for achieving lasting peace, stability and prosperous collaboration on our island through a comprehensive, viable and functional settlement to the Cyprus problem.

“A settlement which will create a win-win situation for all Cypriots, address the expectations, sensitivities and concerns of both communities and ensure mutual respect and peaceful co-existence between all of its citizens; irrespective of their different ethnic, cultural and religious diversity.”

Akinci said during a news conference on Tuesday that he had agreed to attend when he was invited because he was told that the game would take place in the buffer zone but that Unficyp later said that they would not be able to take the necessary security measures and the match was to take place in the south side.

This, he said, raises questions as to the mandate of the UN.

Akinci also raised the issue of equal treatment, arguing that he is willing to attend events in the government-controlled areas if a similar event is organised in the north. He gave as example a theatre play he attended in Limassol some two years ago and a concert Anastasiades attended in Famagusta.

If the principles that had been initially presented to him had been kept, he would have attended the event, he said, adding that when he was invited he was given reassurances that there would be equal treatment.

He said he only found out that the match would not take place in the buffer zone on Friday night when Anastasiades’ office called Burcu to ask how Akinci was planning on going to the match.

The organisers later told him that the match was moved to a stadium in the village centre as they were informed by the UN that they could not provide the necessary security measures for the game to take place in the buffer zone.

It is sad, he said, that “an organisation that wants to contribute to peace did not grasp the sensitivities in Cyprus.”

He also said that if the UN say they cannot take the necessary security measures in the buffer zone this makes their presence on the island questionable. This is even sadder, he said.

Akinci said that he wanted to attend the match and those who forced him to hold such a news conference ought to contemplate on how they contribute to peace.

“I had shown effort to be at the match but this was prevented,” he said.

He also said that the political equality of the Turkish Cypriots ought to be protected in all fields.

The issue, he said, is not who was at the match but for the younger generation to gain their equal rights.