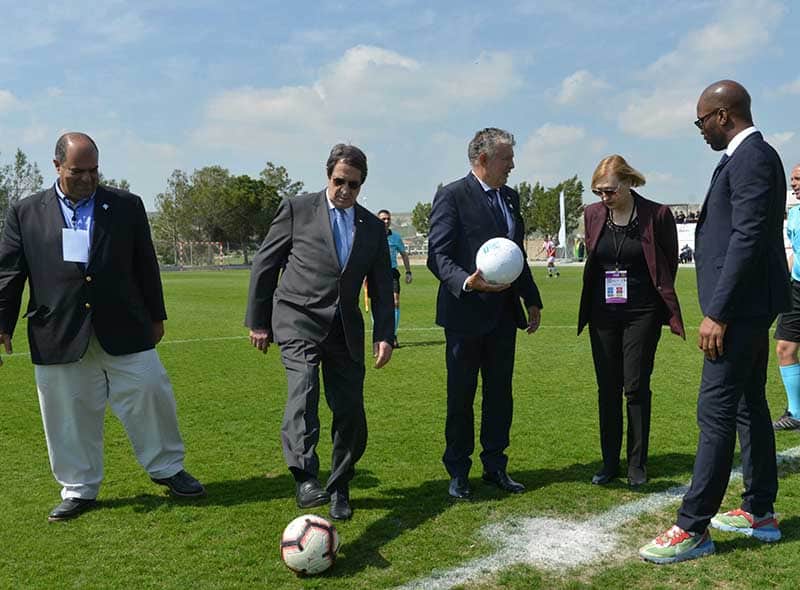 The White Card takes its name from Carton Blanc, a highly-acclaimed travelling photo exhibition by Maud Bernos which highlights the faces of those who are at the very heart of co-organiser Peace and Sport’s action.

Ahead of the match, footballing legend and vice chairman of Peace and Sport Didier Drogba participated in a karate activity hosted for children.

He said that they want to send a message of peace, hope and solidarity, expressing certainty that sport can contribute to dialogue and peace, while uniting peoples all over the world.

“For those of us privileged enough to be in the audience today, we are spectators of an all-too-rare moment: a soccer match from across the divide, a game played in friendly competition, and in peace,” Unficyp head Elisabeth Spehar said.

She added that peace efforts need to land on fertile soil and noted that sports can be a vehicle, especially for youth, to create the conditions for a successful reunification process by helping to build the necessary bridges across the divide.

Head of Peace and Sport Joel Bouzou said that the match was symbolic, as it was attended by political leaders, the two football clubs, and people from both communities.

“Today, we are celebrating the diplomatic power of sport, and we are honoured by the presence of President Anastasiades,” he said.

Sir Stelios Hadjioannou, the other co-organiser, said that the youth present are the real people of Cyprus, who will begin to understand that through cooperation there can be peace on the island.

He added that he hoped this event would be repeated, saying that “the two teams are an example of bi-communal cooperation”.

Asked about the fact that the Turkish Cypriot leader chose not to be present at the event, Hadjionannou referred to the film Lost in Translation and said “there was a misunderstanding whether this stadium is or is not in the buffer zone.”

Before the kick off, artists Costas Demetriou and Erkan Canli sang Cypriot songs, while in the half-time Greek Cypriot and Turkish Cypriot groups danced traditional dances.