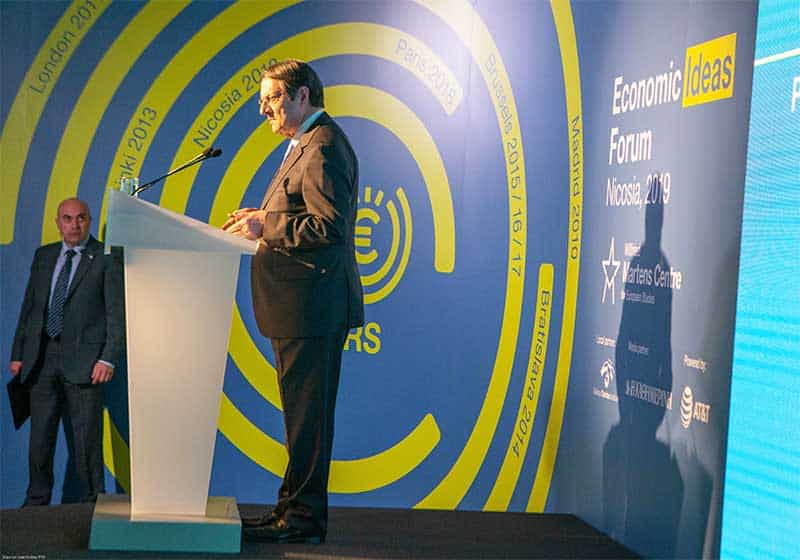 President Anastasiades highlighted on Tuesday the need for structural reforms to establish a more sustainable basis for economic growth.

Speaking at the 10th Economic Ideas Forum, Anastasiades said the government is prepared to cooperate with the European Parliament to promote the necessary reforms in view of enhancing the competitiveness of the economy.

Comparing the state of the economy in 2012, when he assumed the presidency, to today Anastasiades said that seven years ago Cyprus’ credit was rated in the “rubbish” category, while in 2018 it returned to investment grade.

In 2013, during the economic recession, the economy had shrunk by 6 per cent, Anastasiades said, while in 2018 the island saw a 4 per cent growth rate.

“As part of our determination to maintain our compliance with the common financial rules that apply to a country that has in the recent past paid the price of careless management of public finances, we recognise that sustainable financial management is a prerequisite for macroeconomic stability and we remain committed to maintaining of a balanced budget,” Anastasiades told the forum, organised by the Martens Centre, the official think tank of the European People’s Party, and Glafkos Clerides Institute.

In the discussion that followed, head of the Commission’s structural reform support service Maarten Verwey likened the trajectory of the Cyprus economy to the flight of Icarus.

Structural reforms are also needed in the justice sectors, Verwey said, as well as in the educational sector, on which Cyprus spends more than the EU average, while the results of Cyprus education remain below the average.

In his own intervention, Finance Minister Harris Georgiades said the lesson learned from the unprecedented economic crisis was that “if common sense is discarded, there will be a problem.

“If you spend €1 billion over the amount collected as revenues, for an economy of our size this is an issue,” Georgiades said, adding that for this reason the current government has “promoted reasonable economic policies that lead to viable growth.”

On the topic of hydrocarbon discoveries, Georgiades said that these should not be seen as a “way out”, but as an additional source of revenue. “We must maintain fiscal discipline, achieve the final consolidation of the banking sector, and put forward ambitious reforms that will broaden the productive base of our economy.”

Georgiades noted that “if there is something I am regretful of, is that as a government we did not have the opportunity to begin efforts earlier in order to prevent haircuts, and there were choices we had before us which we did not take, and which would have made the onset of the crisis less painful.”