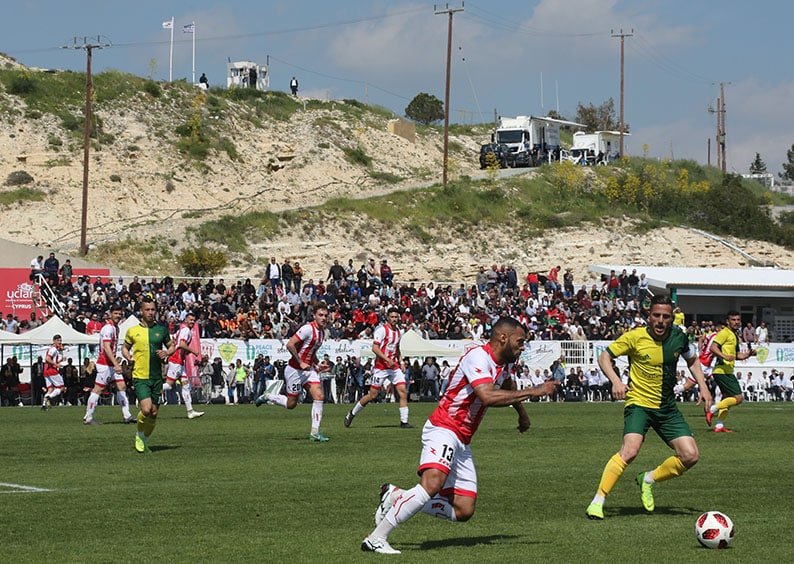 The game between Nea Salamina and Magusa Turk Gucu on Tuesday

The Turkish Cypriot ‘foreign ministry’ on Wednesday criticised the UN for not changing the venue of the bicommunal football match in Pyla on Tuesday because it meant Mustafa Akinci felt unable to attend, and questioned the mandate of the Unficyp peace keeping force on the island.

According to media reports in the north, the ‘foreign ministry’ said it was completely unacceptable that the bicommunal football match was moved to a field in the southern part of the island on the grounds that the UN could not provide sufficient security if it had been held in the buffer zone. It was also an example of the UN’s bias, the announcement said.

The statement comes after Akinci refused to attend a friendly football match on Tuesday between Nea Salamina and Magusa Turk Gucu after he was informed that it would take place not in the buffer zone of Pyla but in a stadium in the government-controlled area.

Pointing out that Pyla is a mixed village with a special status, the ‘ministry’ said that residents of each of the two communities in the village elect their own representatives while Turkish Cypriot police and Greek Cypriot police each have jurisdiction over crimes concerning members of their respective communities.

The UN, it said, is only present at the village as observers and does not interfere with the local affairs of the village.

It recalled that a joint operation had been conducted by Turkish Cypriot and Greek Cypriot police regarding illegal gambling activities within the village.

“Unlike other areas within the buffer zone, the UN has no jurisdiction or control over the village of Pyla. The UN is only present as liaison,” the statement said.

Unfortunately, it said, there has been an increasing trend as regards the UN’s partial stance regarding issues in the buffer zone which not only contradicts Unficyp’s mission but also casts a shadow on the spirit of such events aimed at bringing the two communities closer.

The latest developments once again demonstrated how the Turkish Cypriot side is justified in insisting on a review of Unficyp’s mandate in light of the current realities, the ‘foreign ministry’ said.

Akinci was criticised by many on both sides of the divide over his decision not to attend. UniteCyprusNow (UCN) also censured the Greek Cypriot authorities for not allowing Turkish Cypriot BRT TV’s live transmission vehicle to access the field, preventing its viewers in the north “from following this special event live on TV and taking away their right to access information”. This was also dire in terms of the freedom of the press, the group said.

In an announcement, UCN said that the event could have been an ideal setting for the two leaders to give a strong message of peace and cooperation.

“Unfortunately, it turned into yet another political crisis with Akinci’s last-minute absence.”

Akinci’s tense reaction towards journalists, who were critical of his reasoning during his press conference on Tuesday “added insult to injury”, the group said, adding he should be able to take criticism even if he does not agree with it.

The group said they believe in the political equality of Turkish Cypriots and are also aware of how inflexible official positions can be when it comes to the symbols of the current status quo, “a condition that has been ruining the lives of Cypriots for decades.”

“This is exactly why we expected better crisis management and more creative leadership by Mr Akinci, as he successfully demonstrated many times in the past.”

The group said they are equally disappointed with how the UN has handled the whole situation, failed to analyse the risks on time and take responsibility to avoid this crisis.

All in all, it said, this was yet another example of how official politics in Cyprus is way behind the people and the realities on ground.

“Cypriots are well ahead of politics. The anachronistic Cyprus problem made no sense, had no logic, and therefore was not justified for the hundreds of Cypriots, who enjoyed a beautiful event in a lovely setting in Pyla yesterday.”

The two leaders had been invited to attend by the organisers of the event, the Peace and Sport Organisation and Stelios Philanthropic Foundation. Former Chelsea superstar Didier Drogba was also present as well as the French Olympic champion and president and founder of Peace and Sport, Joel Bouzou, and the head of the United Nations Peacekeeping Force in Cyprus, Elisabeth Spehar.