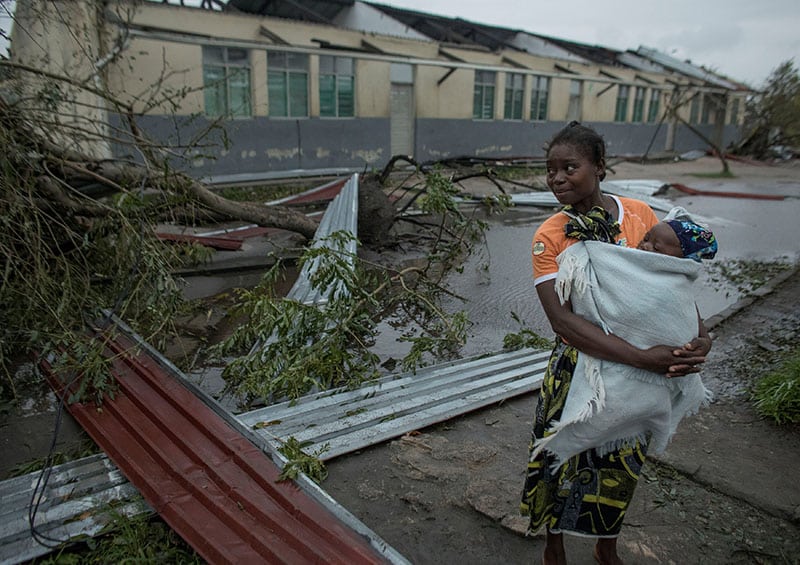 The aftermath of the Cyclone Idai is pictured in Beira, Mozambique, March 16, 2019. Picture taken March 16, 2019. Josh Estey/Care International via REUTERS THIS IMAGE HAS BEEN SUPPLIED BY A THIRD PARTY. NO RESALES. NO ARCHIVES. MANDATORY CREDIT

BEIRA, Mozambique, March 21 (Reuters) – Rescue workers extended their search in Mozambique on Thursday for survivors of devastating floods following a powerful cyclone that ripped through southern Africa a week ago, killing hundreds and destroying buildings and farmland.

The death toll in Mozambique has risen to 217 and around 15,000 people, many of them very ill, still need to be rescued, Land and Environment Minister Celso Correia said, though rescue workers continue to find bodies and the toll could rise sharply.

Connor Hartnady, leader of a South African rescue operations task force, said a key priority for Thursday was to push into remaining areas affected by the flooding that had not yet been explored in search of people needing rescue.

Helicopters were ferrying people, some plucked from the roofs of buildings and tree-tops, to the port city of Beira, the main headquarters for the huge rescue operation.

One helicopter returned with four children and two women, rescued from a small football stadium in an otherwise submerged village. One young child, with a broken leg, was alone, and hung limp from exhaustion as rescuers laid him on the grass before moving him on to an ambulance.

An elderly lady sat, dazed, nearby with two of her grandchildren. All three were unharmed, but the children had lost their mother.

But with flood waters starting to recede, the priority now is to deliver food and other supplies to people on the ground rather than take people out of the affected areas, although that is also still happening, Correia said.

Some 3,000 people have so far been rescued, said Correia.

“Our biggest fight is against the clock,” he told a news conference, adding that authorities were using all means possible to save lives and were working 24 hours per day.

Cyclone Idai lashed the Mozambican port city of Beira with winds of up to 170 km per hour (105 miles per hour) a week ago, then moved inland to Zimbabwe and Malawi, flattening buildings and putting the lives of millions at risk.

The death toll in neighbouring Zimbabwe rose to at least 100 on Thursday after two more bodies were discovered in the Chimanimani district, the worst hit by the cyclone. An estimated 56 people have been killed in Malawi.

The United Nations Food Programme stepped up airdrops of high-energy biscuits to isolated pockets of people stranded by the floodwaters and delivered food parcels to displaced families sheltering in schools and other public buildings in the town of Dondo, 45 km (30 miles) northeast of Beira.

Beira, a low-lying city of 500,000 people, is home to Mozambique’s second-largest port and serves as a gateway to landlocked countries in the region.

Mozambican President Filipe Nyusi, who declared three days of national mourning starting on Wednesday, has said the eventual death toll from the cyclone and ensuing floods could rise to more than 1,000.

EU summit readies for Brexit in May – or next week