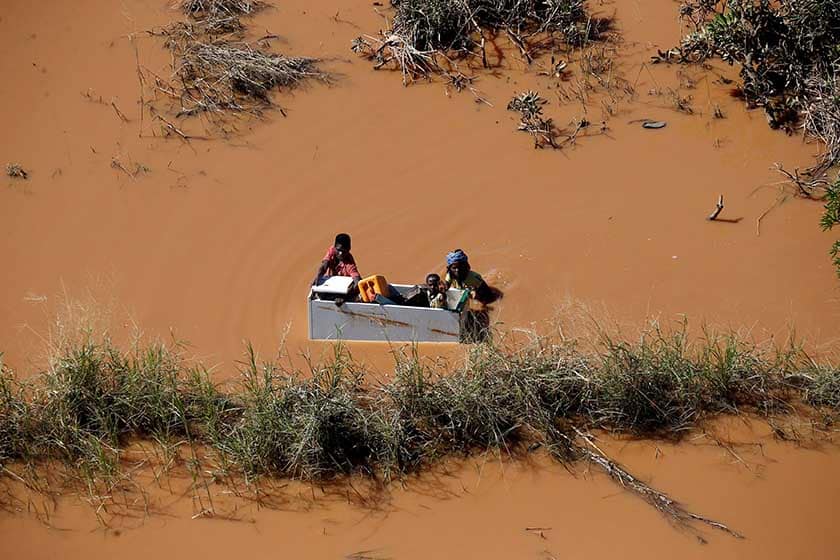 A child is transported on a fridge during floods after Cyclone Idai, in Buzi, outside Beira

Hundreds of thousands of people scrambled for shelter, food and water across a swathe of southern Africa on Friday after a cyclone killed hundreds and swept away homes and roads, testing relief efforts for survivors facing a growing risk of cholera.

Cyclone Idai battered Beira, a low-lying port city of 500,000 residents, with strong winds and torrential rains last week, before moving inland to neighbouring Zimbabwe, where it flattened homes and flooded communities, and Malawi.

Idai killed 242 people in Mozambique and 259 in Zimbabwe, and numbers were expected to rise, relief agencies said. In Malawi, 56 died in heavy rains before the onset of Idai.

As survivors gathered in informal camps and health officials warned of growing danger from measles and cholera, UNICEF Executive Director Henrietta Fore said the situation on the ground was critical with no electricity or running water.

“Hundreds of thousands of children need immediate help” she said, estimating 1.7 million people were affected by the storm.

Around 45 km (28 miles) west of Beira, in Guara Guara village, the government set up a makeshift camp for people rescued nearby, with little water and no toilets.

Most people were outside in blazing sun, or on patches of shade cast by trees. At a nearby school, elderly women curled up on their side on the dirt floor, amongst bits of rubble.

“The help is coming, but it’s coming very slowly,” said Esther Zinge, 60, from near the town of Buzi, adding that what did arrive had to be given to children first.

“The conditions are terrible, and more people keep coming.”

On a beach in Beira, where the Red Cross estimated 90 of the city was damaged or destroyed, survivors clutching infants and bags disembarked from rescue boats beside a ship marooned on the sand by the storm, and began receiving Red Cross help.

In Zimbabwe’s Coppa Rusitu Valley, a township in Chimanimani, near the Mozambican border, hundreds of homes were flattened by large rocks and mudslide from a nearby mountain, burying some residents, who never stood a chance as the cyclone unleashed its fury at night when most were sleeping.

Relatives and rescuers were digging through the debris, hoping to find bodies, but some of the rocks were so big they need blasting, a Reuters witness said. Most people lost relatives, workmates or friends in the township, which also housed government workers, including police.

President Emmerson Mnangagwa on Thursday night said he had come face to face with horrific accounts of people grieving the loss of family and friends in Chimanimani.

Some survivors have taken refuge at churches and centres offering temporary shelter as they deal with the trauma of their losses while private citizens, international aid agencies and the government rushed humanitarian aid to affected areas.

Energy Minister Joram Gumbo said the pipeline bringing fuel from Beira had not been affected by the cyclone but the docking terminals at Beira port had been damaged.

He said Zimbabwe had 62 days supply of petrol and 32 days for diesel, which is in short supply and has led to long queues in the capital. In Mutare city, near Mozambique, diesel shortages were worse, according to a Reuters witness.

In Beira, Saviano Abreu of the UN humanitarian arm OCHA, said the main problem with getting aid to relief camps outside of Beira is they could be reached only by helicopter, since floods had cut off roads, and helicopters were few.

Large parts of the city lacked running water, but everyone affected was getting 20 litres of water for washing, cooking and drinking.

“There have been three security incidents today, all food related,” he told his team, without giving further details.

Commenting on Beira, UN humanitarian spokesman Jens Laerke said if people were desperate to get aid, that should be treated as part of the community response and not as a security matter.

“These are desperate people,” Laerke said. “I don’t think anybody would blame a desperate mother or father who have children who do not have clean water to drink or food to eat who grab it from wherever they find it in a shop.”

The storm’s rains caused the Buzi and Pungwe rivers, whose mouths are in the Beira area, to burst their banks.

Roads into Beira were cut off by the storm, and most of the city remains without power. The Red Cross has estimated 90 percent of the city was damaged or destroyed in the storm.

Death toll from migrant shipwreck off Tunisia rises to 11