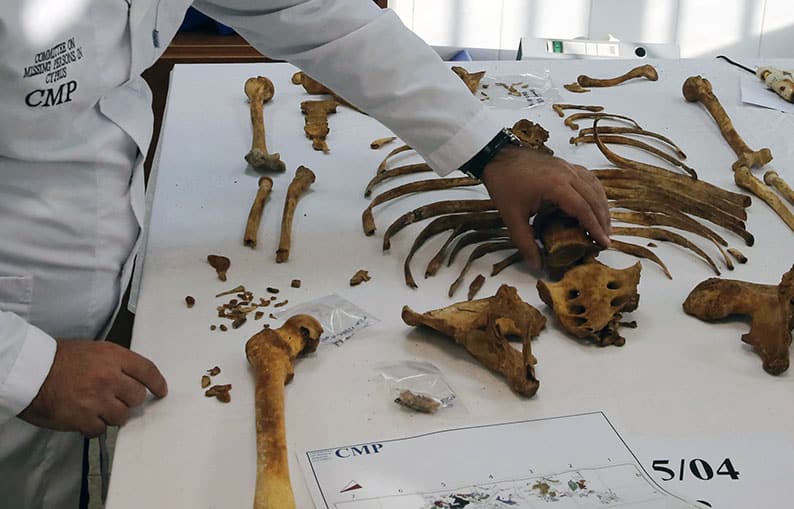 The third member of the Committee on Missing Persons (CMP) and the UN need to do more to fulfil its mission, head of the organisation of relatives of undeclared prisoners and missing persons Nicos Sergides has said.

He was referring to Paul-Henri Arni, the internationally appointed member selected by the International Committee of the Red Cross and appointed by the United Nations secretary-general. The other two members are appointed respectively by the Greek Cypriot and Turkish Cypriot communities.

“In order to convince Turkey to change its stance, actions by international organisations and decision-making centres, which will have a political cost for Turkey, are required,” he said in an interview with the Cyprus News Agency (CNA).

“We expected and we are still expecting from the third member of the committee on missing persons and by the UN secretary general himself to intervene in a substantive and catalytic way.”

He added the CMP knows where to find helpful information on the location of the remains of the Missing, but waited for decades for people to be convinced to give it by the third member of the committee. However, this did not happen, and new ways must be found to achieve this.

The government has decided to promote a new action plan concerning the issue of missing persons, which will be put before the Council of Ministers, a move supported by the CMP.

Meanwhile, the Committee of Ministers of the Council of Europe urged Turkish authorities last week to assist the CMP in any way it can, saying it “deeply deplored the decision of Turkey not to participate in the discussions and urged the Turkish authorities to resume cooperation with the committee [CMP].”

“We hope that a well-organised effort will get underway, at last, with a view to solve the humanitarian issue of missing persons. The international factor can certainly play a significant role in promoting and solving this issue. In parallel we give particular importance to the meetings which President Nicos Anastasiades has with Turkish Cypriot leader Mustafa Akinci,” said Sergides.

“We expect from President Anastasiades to seek the soonest possible a meeting with Akinci specifically about the issue of missing persons, with a view to agree on practical and effective ways that will lead, with no further delay, to establishing the fate of all missing persons, Greek Cypriots and Turkish Cypriots.”

He recently sent a letter to Paul-Henri Arni about what the committee can do to be more proactive in achieving its goal which is to recover, identify and return the remains of the missing persons to their families.

“There was no efficiency in this field, as the results of CMP work show, and what concerns us most is that in recent years efforts towards this direction have slowed down.”

Asked if there are concrete ways in which Turkey can be convinced to cooperate on this humanitarian issue, giving information from its archives and allowing the unhindered research in possible burial sites, Sergides said that “it is clear that Turkey did not want, until today, to see the issue of missing persons as a humanitarian one, as it truly is, and to help resolve it. Its long-standing position has been negative and unbending,” he said.

In an interview with CNA last month, Arni defended the work of the CMP but highlighted the challenges of the passage of time as witnesses have died.

“We are optimistic and we work systematically to carry out our mission,” Arni said in an interview with the Cyprus News Agency (CNA).

To tackle the problem of lack of information, he said the CMP was planning to launch a major communication campaign with companies in Nicosia and Kyrenia that are offering their expertise for free.

“We are putting a big campaign… something big, strong and systematic,” he said.

This will be phase one.

The second phase will follow with initiatives at local level. “We want to localise this communication, to go to villages where we know that there are still unsolved cases, talk to the mukhtars and the villagers. This is aimed more specifically at obtaining new information on hidden burial sites,” he said.

“This is 46 per cent, almost half, it is a good result if you compare to other countries, Argentina with less than 20 per cent over 35 years, Lebanon, where no systematic effort has started in the last 25 years,” Arni said.

The results are good, but came too little too late, he added, since during the first 25 years of its existence – from 1981 to 2006 – the political will was not strong enough to allow the change of the mandate of the CMP into an operation, like it is today, and be able to locate, exhume, identify and return the remains.

Arni told the CNA that the main problem however was diminishing recoveries and accuracy of information.

“The main problem is the fact that our accuracy is going down because of lack of precise information.”
As a result, he said, 10 years ago, in 50 per cent of the sites opened, “we were finding remains, now it is only 20 per cent.”

Hopefully the above information has clarified things for you. As it was previously mentioned, if you are not sure whether you want to allow the cookies or not, it is usually safer to leave cookies enabled in case it interacts with one of the features you use on our site. However, if you are still looking for more information, then feel free to contact us via email at [email protected]rus-mail.com