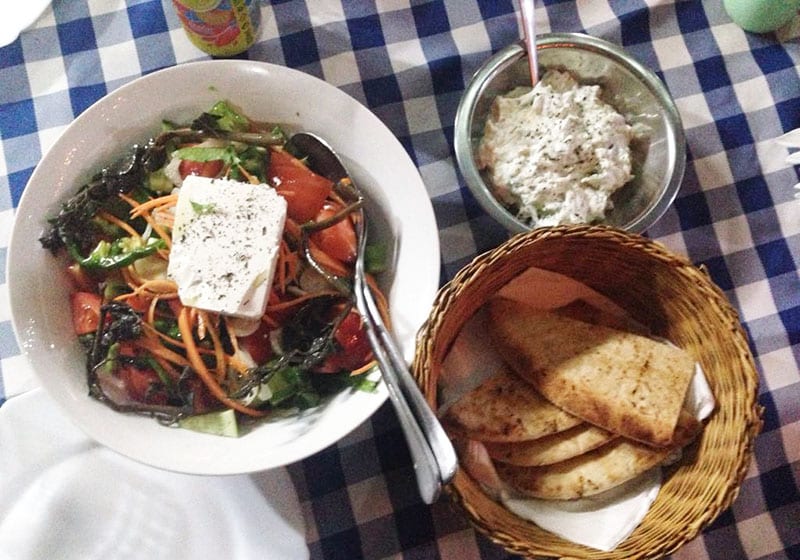 Ouzeraki, a little stone tavern in Erimi is just a little bit quirkier than most – situated along a narrow, cobbled road that runs parallel to the main road, this little eatery filled with Cypriot artefacts and decor is easily missed during the day. However, at night, a host of fairy lights strung across the ceiling and windows might appear to be forgotten Christmas decorations but serve as decoration to indicate the place is open for business, helped by a neon blue sign along the wall.

Inside, the dark wooden tables adorned with traditional blue and white chequered tablecloths are squashed in, hopeful to fit 50 but realistically only servicing about 30 at a time. A large flat screen graces one wall, a line of tables the other, and a small bar more for decoration than actual use, lines the other. In the centre of the room is a cosy wood oven stove which generates a surprising amount of heat. Toilets are another matter. Very clean and nice, but as they are located outside and down a flight of steps, not so great for the immobile.

It was a Saturday night when we popped in – no reservation – and there were about five or six tables occupied, a fifty-fifty split between foreigners and locals, although we got the impression the foreigners had visited many, many times before. The locals watching football on TV with the volume turned down had clearly made themselves at home. No matter to us: we were not interested in the match, but we were starving!

Menus consisting predominantly of traditional dishes were duly handed to us and while we were perusing them, the neighbouring table received their order. Wow! Gigantic plates and portions! We tried to subtly steal a glance, but we needn’t have worried. The owner, dressed in a long apron and wearing a huge smile, enthusiastically whisked their dishes while their cutlery was still mid-air and brought them to OUR table, showcasing each dish and its value, obviously very proud. Seeing the amused looks on the faces of the other customers, we gathered they were used to it. By the time the third plate had been brought in front of us, we couldn’t stop giggling.

Their order consisted of a very appetising charred pork kebab, salad and chips on one plate and a gorgeous array of seafood on another, so we decided to take two dishes to share between the three of us in order not to over-order.

In fact, the seafood plate looked so good, we opted for that: a large octopus tentacle grilled nicely, a couple of mussels with a mustard sauce, some fresh calamari (much nicer than the frozen calamari rings so often served), a large fillet of white fish, some crab claws, and a couple of very tasty prawns, accompanied by salad and chips meant we all got what we wanted!

To accompany our seafood platter extraordinaire, we chose a Greek salad for which the menu listed three price categories: €3, €5 or €7. Advised not to take the €7 one by the waitress as it was “very, very large”, we opted for the 5 euro one and were really impressed. It was a huge serving – more than enough for all of us – and included cabbage, lettuce, a little carrot, onion, green peppers, tomatoes, cucumbers, capers and feta.

We also ordered tzatziki with pitta, and the pitta, which had been warmed, was replenished every time it ran out for the duration of the meal.
The food was fabulous – and more than enough, so much so, we have ordered delivery (it is free to surrounding areas), and eaten in, several times since. Attentive staff fluttered in and out of the kitchen, keen for us to enjoy our experience, while the owner rushed in and out of the restaurant with delivery orders snug within massive polystyrene containers.

When it came to dessert, confusion ensued as a bowl of oversized mandarins which we didn’t order, came to our table, along with three plates each sporting a sliver of cake. It turns out, because they have no dessert menu, it’s included! The fruit (seasonal) and the cake (one choice ordered daily from a bakery) are offered for free. A really nice way to end the meal.

Very down-to-earth with glowing reviews online, this place deserves at least one visit in your lifetime….