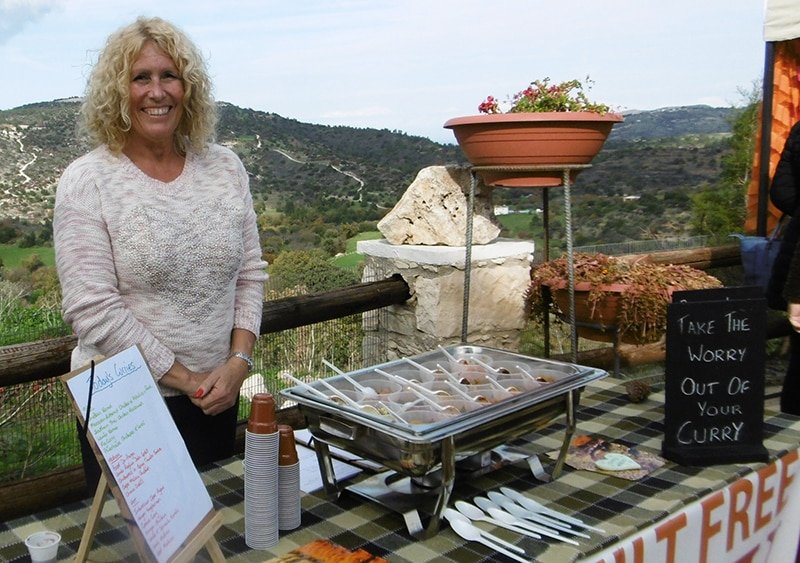 Where do you live?
I live in Polemi, Paphos district, with my two huskies, Dolce and Lulu.

Best childhood memory?
Moving from Scotland to Australia at the age of nine years, arriving to gorgeous weather and a complete change of lifestyle.

Most frequented restaurant and absolute favourite dish? What would you turn your nose up at?
Favourite Restaurant is Oniro’s, opposite the ship wreck above Coral Bay on the west coast. Favourite dish is their Lamb Arouk. I love all food except for tripe and Brussel’s sprouts.

What did you have for breakfast?
Today I had a protein shake; I have this most days as I work at Hyper Fitness five days per week and at Farmers’ markets every weekend which takes a lot of energy and stamina.

Would you class yourself as a day or night person? What is your favourite night out?
I am definitely a day person; I get up very early to walk the dogs but also just to enjoy the different seasons in rural Cyprus. At night, I love just going to a local tavern such as the Olive Tree and chilling out with friends.

Best book ever read?
Deadlock by Damien Boyd. Love a book with a twist and this one has many twists.

Favourite film of all time?
War of the Roses, a fabulous dark comedy with superb acting from Michael Douglas and Kathleen Turner. Also brilliantly directed by Danny DeVito.

Best holiday ever taken?
Climbing the High Atlas Mountains in Morocco. Travelled with a great crew, laughed, broke bones and just had a terrific time.

What music are you listening to in the car at the moment?
Rock FM

What is always in your fridge?
Curry spices, home-made curries and lots of them. I started the Guilt Free Curry company because so many commercial curries are loaded with unhealthy, bad fats. All of my many curry recipes, which derive from all the curry-eating nations, are pared down to the least fat and oil possible; my patrons pronounce them ‘seriously yummy’. Also loads of fresh fruit and vegetables and great coffee beans – an important staple!

Dream house: rural retreat or urban dwelling? Where would it be, what would it be like?
Love living in rural Paphos as it’s great for my huskies, but I would also like a cosy apartment in the Paphos Old Town to stay in after a night out. No plans to move away from Cyprus!

What is your greatest fear?
Snakes… one almost ate my jumper after nearly standing on a large black snake in Australia. Black snakes are deadly in Australia.

If you could pick anyone at all (alive or dead) to go out for the evening with, who would it be?
I’d like to spend the evening with Sean Connery, because he is such a fabulous actor and has had an interesting life.

Tell me a joke?
Helvetica and Times New Roman walk into a bar. ‘Get out of here’, shouts the bartender, ‘We don’t serve your type!’

Subtext: Ali and the Guilt Free Curry Company follow the Paphos Farmers’ Market circuit from March to December. Find her and keep up with the company’s activities on Facebook