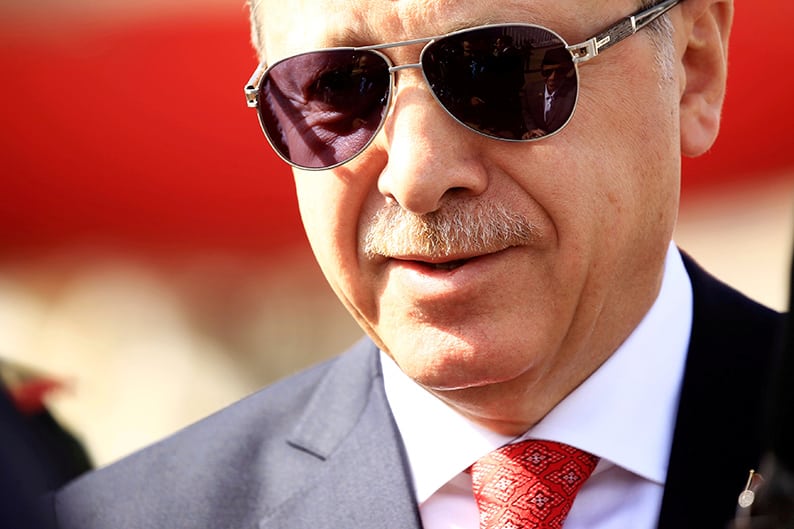 YOU can keep your Orban, your Netanyahu, your pathetic Boris Johnson. As for Donald Trump, he’s really an icon of democracy, just slightly shop-soiled. The coveted title of World’s Leading Demagogue has just gone to the Turkish President, Recep Tayyip Erdogan.

Erdogan may look like an ageing, disappointed post office clerk, passed over for promotion too many times, but he can take an ignorant remark from halfway around the planet and inflate it into an existential threat to Turkey’s future. He’s desperately trying to rally support for his AK party in local elections due at the end of the month, so what better theme than the threat of an invasion by New Zealand?

“Your grandparents came here,” he warned the savage New Zealand hordes, “and they returned in caskets. Have no doubt that we will send you back like your grandfathers.” Erdogan had already warmed the crowd up by showing them footage of the massacre of New Zealand Muslims in their mosques by Australian terrorist Brenton Tarrant, so they cheered that line.

“They are testing us from 16,500 km. away, from New Zealand, with the messages they are giving from there. This isn’t an individual act, this is organised,” he explained, and then showed the crowd extracts from Tarrant’s 74-page manifesto on a giant screen. One of the killer’s many goals, it seems, was to ‘drive Turkey out of Europe’. (The country’s north-western corner, including half of Istanbul, is the southern Balkans.)

Erdogan also accused the West as a whole of “preparing” Tarrant’s manifesto and “handing it to him.” New Zealand is presumably just the West’s chosen weapon. There are three times as many people in Istanbul alone as there are in New Zealand, so that may sound like an empty threat to you, but bear in mind that Erdogan’s electoral support mostly comes from the less well educated half of the population.

He was speaking at a rally commemorating the Ottoman empire’s victory over British and allied troops who landed at Gallipoli, 200 km southwest of Istanbul, in 1915. ANZAC (Australian and New Zealand) troops played a big part in that First World War battle, which is one of the founding myths of modern Turkish nationalism.

So Erdogan’s audience would not necessarily have giggled when he defiantly warned the evil New Zealanders: “We have been here for a thousand years and will be here until the apocalypse, God willing. You will not turn Istanbul into Constantinople.” There he stood, metaphorical sword in hand, turning back the New Zealand neo-Crusaders single-handed, and the world heavyweight title for demagoguery was his.

First, a couple of niggling details. Istanbul IS Constantinople; the name hasn’t changed. ‘Istanbul’ is just the Turkish pronunciation of the old Greek popular name for the city, ‘Stamboul’. (The Turkish language does not like words to start with two consonants.)

Second, the Turks have NOT been there for a thousand years. They conquered the city in 1453, five-hundred-and-some years ago. Before that it was Christian for rather more than a thousand years. But you don’t want to get caught up in the details when you’re holding a flaming sword.

And third, I have never met anybody in Europe who wants it ‘back’. It would be as ridiculous as somebody in the Muslim world wanting Granada or Seville back.

Oh, wait a minute. I HAVE met Muslims who want Granada and Seville back. They tend to be of the Islamist persuasion, but there is a quite widespread conviction in the Arab world that the original 7th-century conquests that gave Muslims control of half of the then-Christian world were legitimate, whereas the 12th-century European counter-offensive that tried to take some of them back (the Crusades) was illegitimate aggression.

It was really just the ebb and flow of empires, with religion mostly as cover. The Muslims (or at least the Ottoman Turks) were on the offensive again by the 15th century, almost reaching Vienna by 1688. Then the tide turned again and the British empire was almost at the gates of Istanbul in 1915. Nothing to get excited about – and now it’s over.

It really is over. Legally, it has not been permissible to change borders by force since the UN Charter was written in 1945, and in fact few have changed. Militarily, modern technologies and methods of political mobilisation have made it ruinously expensive to sustain the long-term occupation of people who do not want to be occupied.

So I think it will be hard for New Zealand to reconquer Istanbul even if it wants to. Turkey is safe. But the old tribal buttons are still there to be pushed, and there are plenty of populist demagogues willing to push them.

Trump has his border wall (‘criminal’ Mexicans) and his anti-Muslim immigration controls (‘terrorist’ Muslims). Orban has the Jews (the enemy within Hungary’s border) and Muslim refugees (the enemy without). Narendra Modi, now in election mode, has Muslims both within India’s borders (cow-killers) and beyond them (Pakistani nukes and terrorists).

And Erdogan just has New Zealanders. Must try harder.

The cardinal error committed by the Greek Cypriots