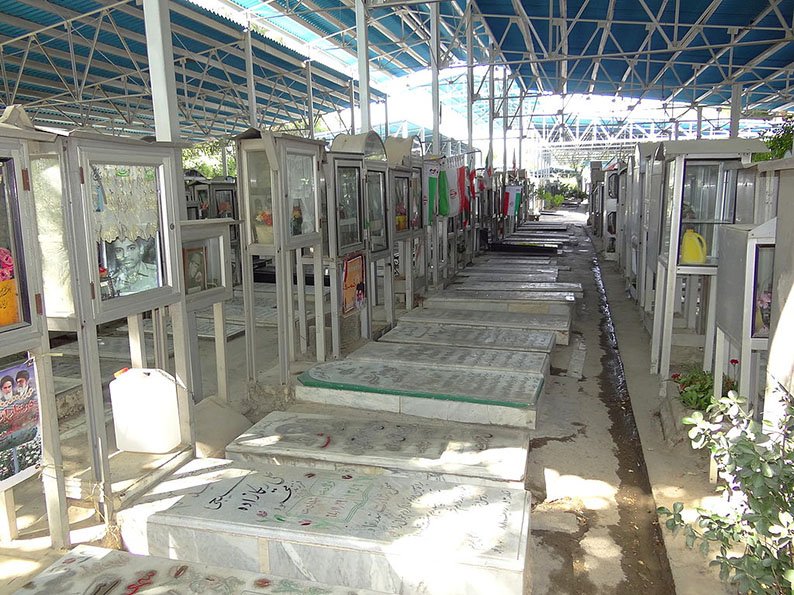 The vast Behesht Zahra cemetery in Tehran reveals an awesome tableau of over 200,000 victims of the Iran-Iraq War

The Cyprus Mail ‘Our View’ opinion article (March 17, 2019) on the plight of Greek Cypriot refugees from the 1974 invasion, together with most of the readers’ comments that support the Mail’s article, has highlighted a ghastly travesty. On the one hand, genuine refugees who lost their homes and property when forced out of what is now the Turkish north have been subject to decades of cynical manipulation by Greek Cypriot politicians and others, which denies them proper compensation despite much political rhetoric promising it. On the other hand, some descendants of such genuine refugees have also apparently been claiming a permanent hereditary refugee status. As one commentator (himself a genuine refugee) put it, “If this continues, the whole island will ultimately ‘enjoy’ refugee status”.

For non-genuine 1974 refugees, most of whom were not even born in 1974, it would appear that ‘refugee-ism’ has become a lifestyle choice whereby they can indulge themselves in victimhood, wallowing in self-pity and seeking sympathy and hereditary entitlement to property rights, benefits and privileges not granted to ordinary citizens.

Seen from the cockpit of the Greek Cypriot population of some 800,000 on this small island, the 45 years of unresolved compensation for loss of property may seem a terrible cross that the genuine refugees must bear – if only because ‘this is Cyprus’ and failure to reach negotiated settlements (whether with the Turkish Cypriots or with its own Greek Cypriot citizens) is something in which Greek Cypriot politicians and governments past and present excel – it’s almost an obsessive-compulsive cynical intransigence disorder!

However, it is instructive to compare and contrast the Greek Cypriot post-1974 refugee experience with that of other countries that have also been invaded and experienced a large-scale internal refugee problem. We are not therefore talking about conflicts that have resulted in large-scale outflow of refugees.

A Tale of Two Invasions

On September 22, 1980, Iraq attacked and invaded Iran in what turned into an eight-year war ending in August 1988. The initial Iraqi attack was a blitzkrieg invasion of Iran’s oil-rich southwestern province of Khuzestan, centred on the cities of Ahvaz, Abadan and Khorramshahr. Caught by surprise, the best that Iran’s limited local military forces and self-organised militias could do there was conduct an asymmetric guerrilla campaign to hold up the Iraqi advance while awaiting reinforcements from the north. I report this not as a historian or from books or internet research but from the eye witness testimony of my wife’s family who were there. My brother-in-law spent some 40 days in Khorramshahr with a militia group armed with RPGs, Kalashnikovs and small arms and even a captured tank, fighting street-by-street. Rapid deployment of Iranian special forces (the Navy Rangers) helped the militias block the Iraqi advance before a proper counter-invasion force arrived.

During this initial period, a mass civilian evacuation of the province took place. An estimated one million people fled north and were relayed via the cities of Shiraz and Isfahan up to the capital Tehran and other cities in the north.

Like their Greek Cypriot counterparts following the Turkish invasion, these internal refugees were deeply traumatised, having overnight lost their homes and possessions and, in some cases, relatives killed or injured by enemy action. Families were often split up owing to the chaos and confusion, the urgency of evacuation, and male members staying behind to fight. Telephonic communications with Khuzestan were either lost or intermittent. Once in Tehran, it took my wife’s family several weeks to establish that their sons were still alive.

Initial assistance from the Iranian authorities to such refugees was limited to finding accommodation to rent plus a modest one-off cash grant to re-establish themselves. Beyond that, the refugees were expected to find themselves work and generally fend for themselves. While this may seem rather harsh, it was in the context of a war of national survival where other priorities were more pressing. However, I have yet to hear one iota of complaint or self-pity from any of the many such refugees I know or have met. They all adopted a ‘can do, let’s get on with it’ attitude, as indeed to be fair did many of the Greek Cypriot refugees.

Not until after Iraq’s Saddam Hussein had been finally deposed in 2003 did the Iranian authorities allow citizens to return to Khuzestan to reclaim their land and property. Note, no state compensation. Khorramshahr, for example, had remained abandoned since 1988, in case Saddam re-invaded. My wife’s photos showed a totally obliterated city reminiscent of Dresden in Germany after Allied bombing in WWII.

Nevertheless, in Iran the state focus on post-war care of its wartime population has been on war widows, war orphans and disabled war veterans and not internal refugees. To put things in perspective, an estimated minimum 450,000 Iranians were killed in the war and war widows, orphans and disabled service personnel also number in the hundreds of thousands. Should anyone doubt the scale of loss, I have visited the vast Behesht Zahra cemetery on the southern edge of Tehran which reveals an awesome tableau of over 200,000 victims of the Iran-Iraq War, each of whom is regarded as a martyr.

So, in summary, two very different attitudes and approaches to internal refugees. In one case, refugees are expected to face their adversity with dignity, integrity, honour and resilience and to get on with their lives under their own steam without dependency on the state. In the Cyprus case, refugees are encouraged to be inadequate and to act out the role of a perpetual refugee having special privileges and dependencies on the state, all of which should be handed down to successive generations ad infinitum.

From a parochial Cypriot perspective, the ongoing indulgence of 1974 refugee claimants and their children and grandchildren may seem appropriate, normal and even praiseworthy. Indeed, it has been going on for so many decades that it has become so normalised in Greek Cypriot society that it has become an almost sacrosanct cultural artefact. Woe-betide anyone who dares ask searching questions about it, let alone challenge it!

Genuine refugees deserve support. However, refugee-ism is counter-productive and damaging, both for undeserving claimants and for society. It encourages victimhood and a dependency culture that perpetuates way beyond a reasonable period of time for post-trauma recovery, after which resilience and ‘moving on’ would normally be expected. A small population such as Cyprus needs to be outward looking and self-confident and its many successful entrepreneurs and professionals, both in Cyprus and beyond, are testament to that. Professional refugees are not part of that narrative and politicians should recognise this fact and act accordingly.

Dr Alan Waring lived and worked in Cyprus for 13 years. His recent two-volume anthology, The New Authoritarianism: A Risk Analysis of the Alt-Right Phenomenon is published by Ibidem Verlag

A general election is the obvious way out for Britain