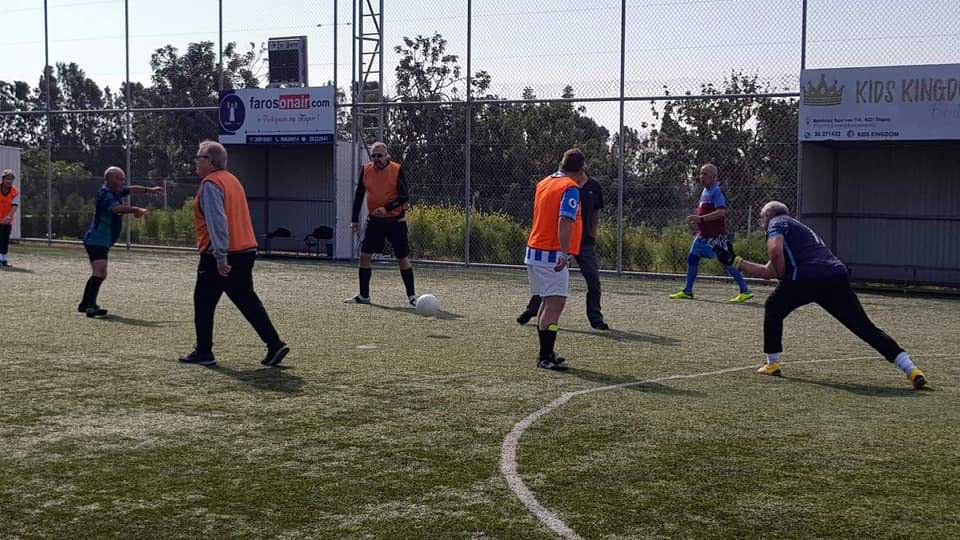 A relatively new sport aimed at the over 50s is already gaining momentum in Paphos following the recent creation of a ‘walking football’ group.

“Twenty-four players aged from 50 to those approaching 80 have already registered with us and we are hoping to attract even more,” Ian Charlesworth (Charlie) told the Sunday Mail.

Launched just six weeks ago, ‘Paphos United Walking Football’ is attracting Paphos residents who hail from all over the globe, said Charlie who is group secretary.

Walking football is predominantly aimed at the over 50s, although those in their 40s will be accepted in Paphos. The game involves playing football without running, sprinting or jogging. It’s a non-contact sport and the ball should not travel above head height.

Currently matches are played with five or six a side and sessions are for men and women.

Charlie said that although a certain amount of skill is involved, players possess varying degrees of ability, and the aim of the initiative is for participants to enjoy the experience, which comes with the benefits of physical exercise, activity and social interaction.

“These are the three F’s under which we operate: fun, friendship and fitness,” he said.

Walking football was devised in 2011, by the Chesterfield FC Community Trust in the UK, as part of the ‘Extra Time Initiative’ aimed at people aged 50 years and over. Its aim is to keep people involved with football who may have mobility issues or for other reasons are not able to play a traditional game.

‘The Football Project’, a Nicosia-based organisation is looking to help walking football progress in Cyprus and cooperate with the Cyprus Football Federation to help promote the sport to create an association and national leagues in the future.

Walking football is a current UK ‘craze’ after coverage of a session featured on Sky Sports News and a documentary broadcast on Sky Sports Football.

Several other clubs have adopted the game and support is growing daily, with over 1,200 registered teams in UK.

“Although walking football is based on association football, the main difference is that, if a player runs, then they concede a free kick to the other side.”

There is also a ban on slide tackles, part of a set of rules to ‘level the playing field’ for those who may have a physical disadvantage.

“We do have a couple of ex-professionals playing,” said Charlie, including one from Denmark, who’s in his 70s and very fit.

The beauty of the game is that it is suitable for everyone, and currently one of the players, a 77-year-old man, is able to play despite having a double knee replacement, he said.

Next week, the UK’s Graham Collier, a current England Walking Football Over 60s International, who played professional football for Nottingham Forest and Scunthorpe United, will be joining the group to undertake some coaching and offer helpful tips.

In June, the ‘England Walking Football Over 60s’ manager, Stuart Langworthy, will also attend a couple of sessions.

“He thinks it will become huge here and he’s got experience of setting up a team in UK. They started their team with only four players and just four years later, they have 60 players in their squads. They are now one of the best teams in England,” said Charlie.

The ‘Paphos United Walking Football’ sessions take place every Tuesday morning at 9.45am at the ‘AM Fair Game’ sports centre Tremithousa, and also at the Tala community council football ground.

‘Paphos United Walking Football’ has a Facebook page which is kept up to date.

Climate does not recognise political positions