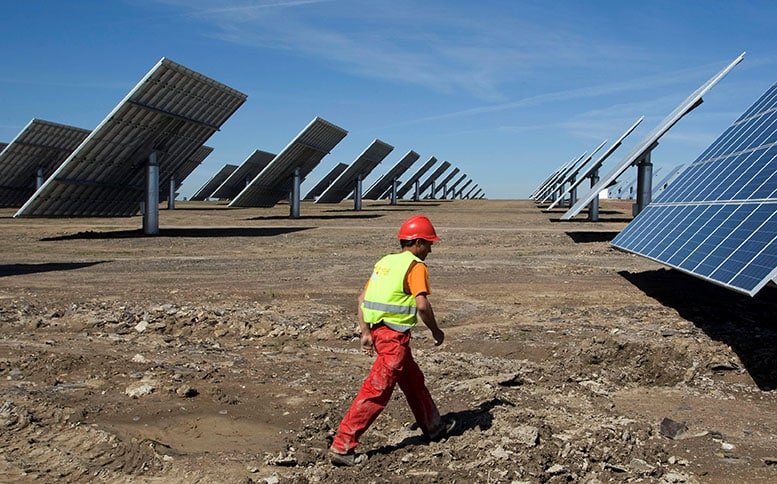 Solar power plant in Amareleja, southern Portugal. By 2017 it was producing 54 per cent renewable electricity

A renewables roadmap for Cyprus was the title of a comprehensive roadmap published in 2015 – but still very valid – by the inter-governmental International Renewable Energy Agency (Irena), of which Cyprus is a member. The report’s introduction states that “the Republic of Cyprus has engaged with Irena to develop a renewable energy roadmap for the country.”

Irena expressed hope that “this roadmap will prove useful in the country’s pursuit of accelerated renewable energy deployment. As our world strives for a future based on clean, secure and affordable energy for all, Cyprus can be the lighthouse that helps illuminate the course for others.”

The key findings from this roadmap are:

Based on this analysis, renewable energy could provide 25-40 per cent of Cyprus’ total electricity supply by 2030.

The roadmap went further and made detailed recommendations that would help increase use of renewables and minimise electricity generation costs in Cyprus.

Had its recommendations been fully implemented, according to the roadmap the renewable energy share of electricity by 2020 should have been between 18-28 per cent. Of course this has not been done. Only 8.9 per cent renewable energy share was achieved by 2017, against a modest, binding, target to reach 16 per cent renewables in electricity consumption by 2020, that now looks increasingly unachievable.

What is holding this up

It has been stated that it is not easy to increase use of renewables in power generation in Cyprus because our systems are designed to use fossil fuels and conversion is costly – we have to wait until electricity storage systems become available. It is claimed that this is what is holding us up. But is it correct?

Solar PV power costs have come down dramatically. Recent auctions in Egypt and Jordan have produced costs down to €22/MWh. Both countries are already benefiting hugely from renewables.

Use of storage batteries have now become widespread globally because of rapidly falling costs – between 2016-2019 unit prices halved. In California they are not building gas-fired power plants any more, despite access to cheap natural gas. New additions are predominantly solar PV plants combined with battery storage, because they are even cheaper and cleaner. In the UK 3.3GW of storage capacity is now operational and a further 5.4.GW has planning consent.

With the costs of solar PV and battery continuing to decline relentlessly, by 2020 unit costs are expected to be even lower.

Portugal and Spain relied mostly on fossil fuels for their electricity generation not that long ago. And they are not richer countries – the GDP per capita of Portugal is below Cyprus, just over 80 per cent, and that of Spain just above. By 2017 they were producing 54 per cent and 36 per cent renewable electricity respectively. Conversion to renewables does not appear to have led to insurmountable costs or problems. Even Greece has achieved 24.5 per cent, with a GDP per capita of just over 70 per cent of that of Cyprus.

So what is really holding us up? Why don’t we implement Irena’s roadmap, already available to us? And even better, why don’t we ask Irena to come and update this roadmap and advise us on its swift implementation, starting immediately? Irena would welcome the opportunity.

Importing liquefied natural gas (LNG) appears to be the main reason behind the slow implementation of renewables. If, for example, a third of Cyprus electricity consumption per year is diverted to renewables, the unit cost of recovering LNG facilities investment and operational costs will go up by 50 per cent per kWh. This will make electricity prices even higher.

But importing LNG has a number of serious drawbacks as follows:

In other words, soon after committing to LNG imports Cyprus will still be faced with problems achieving 2030 EU carbon emission and renewables targets and will require to implement further measures to achieve EU targets.

This means that importing LNG will have short term benefits, at best, and will not deal decisively with EU carbon emission and renewables targets – used as the main reason for considering imports of LNG in the first place. The major drawback is that this will come at an increase in costs to the Cypriot electricity consumer. Cyprus should disclose the results of any economic impact studies it has carried out justifying the import of LNG.

It is understood that the European Investment Bank (EIB) is considering investing in the LNG import project. So in effect, the European Commission (EC) through its grant and the EIB may end up subsidising a fossil fuel project which in doing so delays even further the implementation of renewables – thus going in the opposite direction to EU’s climate change objectives.

What we should be doing

Cyprus should move from words to action on climate change. Claiming that we are at the forefront of climate change action, but doing nothing about it does not inspire confidence. Cyprus’ universities are doing a lot but Cyprus is way behind.

We should implement Irena’s roadmap as a matter of priority and invite Irena to update it and assist with its implementation.

The roadmap and generally all energy-related plans and activities should be included within Cyprus’ Energy Plan to 2030. Cyprus is late in preparing this, so there is still time. And very importantly, this should go through meaningful public consultation as required by the EU.

The immediate goal to achieve Cyprus’ climate change targets can be realised through rapid implementation of renewables projects combined with battery storage. The process to be followed should be through competitive auctions. Those countries who have done so, including Egypt and Jordan with help from the European Bank for Reconstruction and Development, have achieved dramatic results.

The EC and EIB should request the government to demonstrate how the import of LNG will help swift implementation of Irena’s roadmap, with a firm timetable to implement renewables targets between 2020 and 2030.

If that is not demonstrated, the EC and EIB should reconsider their investments into LNG imports and, instead, support renewables, and in particular in combination with energy storage support measures to address grid congestion and improve grid reliability and stability.

Wake up with Junkey Moneywise