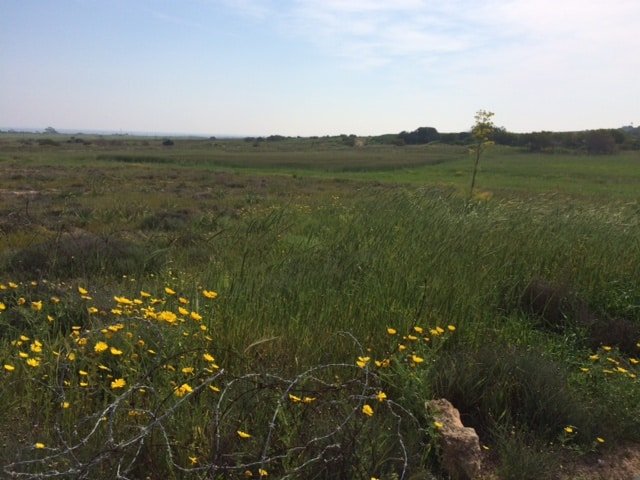 Growing cereals in the buffer zone

The buffer zone is an area of opportunities, or at least this is what Andros Karayiannis, mayor of Dherynia, believes.

He probably knows better than most, as 75 per cent of the community’s land is in the demilitarised zone patrolled by the United Nations Peacekeeping Force. The municipality is all for using the land, and is doing so by helping farmers get access to it. The land in question can be farmed, but permission to use it needs to be granted by the United Nations.

When a farmer is interested in a piece of land, the municipality is the first point of contact, as the officials need to tell the interested party who the owner of the plot is.

The next part is up to the owner and the farmer, who have to agree on the land use. Often but not always the farmer pays for the use, often just a symbolic amount.

They then have to fill in a form, with which the municipality helps, and submit it to the United Nations.

It is important to encourage movement in what is also called the ‘Green Line’ for several reasons, the mayor explained.

It brings Greek and Turkish Cypriots together, who often work side by side on pieces of land. “The soil unites people,” is how he put it.

“We’re farmers because we love what we’re doing,” said Sotiris Marinou, 43, who grows organic strawberries, tomatoes and cucumbers in the buffer zone.

He used to be an electrical engineer.

“This isn’t a job where you can make a lot of money,” he said. “I could probably earn more as an engineer in another country. But I am a lot happier here.”

There have been no clashes between farmers of the two communities, neither between the Dherynia residents and the Turkish soldiers, which according to the mayor is because all involved understand the need to avoid provocations and to cooperate.

Much of the land is near the sea, which is another reason to cultivate it. The combination of the rich red soil in the area and the minerals in the sand at the coast means that produce is able to mature much faster.

“Watermelons for example usually mature in May but at the coast at the end of March,” he said. “In March the price is €5 per kilo and in May €0.50.”

In addition, a fair amount of organic farming takes place, as some of the land has not been in use since 1964, when the UN took over, hence no pesticides have contaminated the soil.

However, fewer than 20 farmers are cultivating the land, and a lot more could be done, Karayiannis said. He is in favour of constructing houses for the young and poor, something for which EU funding is available.

Though there are no clashes, the Turkish troops do not welcome too much activity which may be going on as close as five metres from where they are stationed, and are dead set against any buildings in the vicinity.

And though the municipality is willing to push for more use of the area, in the end all they can do is encourage the farmers and help them fill in forms.

There are positive sides for the land lying fallow. It has become a habitat for flora and fauna, thriving on the near absence of hunters and most other human interference.

“We are the custodians of the buffer zone,” spokesman for the UN peacekeeping force in Cyprus Aleem Siddique commented. “We work closely with both sides to ensure the protection of the environment in the buffer zone. The flora and fauna within it are unique and it’s imperative that we make all efforts to preserve the environment. Our civil affairs office works closely with farmers on both sides to provide access to areas of the buffer zone while maintaining the military status quo at all times.”

The mayor also agrees on the importance of the fauna and flora, and lauds the growing of cereals, vegetables and strawberries.

But he and his fellow villagers would also like to use the abandoned hotels in the buffer zone again, which is probably a decisive reason why 64 per cent of the roughly 8,000 residents voted in favour of the Anan plan in 2004, which was rejected by 75 per cent of Greek Cypriots.

Karayiannis says the community has always been for reunification, and that the opening of the checkpoint in the area in November 2018 has much to do with the municipality pushing for it.

“We are six municipalities with demarcations such as ours on the island, and we have formed a committee of which I am the head,” he said. “We have promoted the checkpoint and had several meetings with the president. Other communities are not interested.”

All about the ink

No struggle is successful without unity, President says