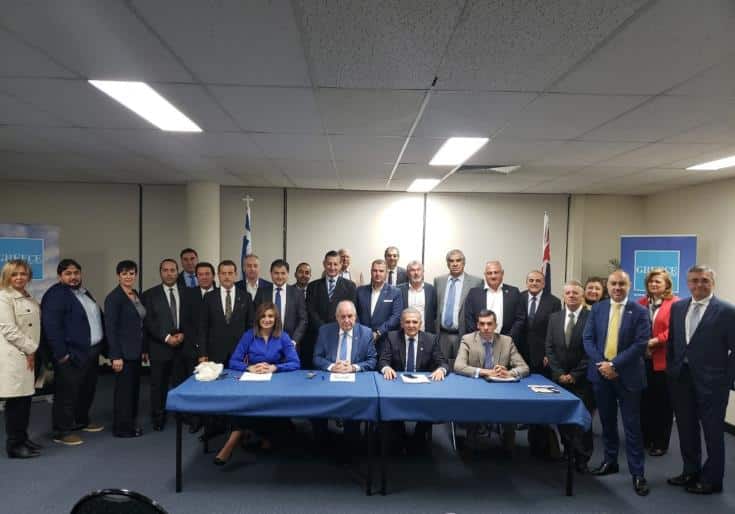 The Chambers of Commerce of the Cypriot, Greek and Egyptian diasporas in Australia are preparing an action plan to promote trade and investment relations with the three respective countries, and according to Presidential Commissioner Photis Photiou, they will discuss this initiative with the competent authorities.

Photiou, together with Egyptian Minister of State for Immigration and Expatriates Affairs Nabila Makram and Greek Deputy Minister for Foreign Affairs Terence Quick are in Australia to attend activities, as part of the “Nostos 3” programme for the diaspora.

In a joint statement, the three officials highlight the role of the diasporas in fostering commercial ties with Australia and reconfirm their governments commitment to support diaspora business people in their efforts to promote trade and investment initiatives.

“Trade and investment are also an important tool of enhancing diplomatic and business relations between the three countries and Australia, which is also the aim of Nostos. This visit will add another dimension, which is the role of diaspora in the development of trade and investment relations,” it added.

As for programme’s objectives in relation to the younger generation, the statement says they aim to encourage the youth to preserve and promote their heritage and culture.

Nostos 3 is a trilateral initiative, aiming to bring the three diasporas of Egypt, Cyprus and Greece closer and create strong links between them and their home countries.

Photiou, Makram and Quick also note that “multiculturalism is a key fabric of society that ensures Australia`s success and has contributed positively in the development of the country.” Immigrants, such as those in Australia, prove to the world that a successful integration policy which embraces people from various backgrounds has a far-reaching positive impact, they add.

Two round table discussions were organised in Melbourne, one on Monday with representatives of youth organisations and on Tuesday with business people.

Speaking to CNA, Photiou said that “there is clearly an initiative by the three chambers of commerce of the diaspora in Melbourne to cooperate and create together a coordination mechanism.”

The chambers, he added, would develop an action plan to be discussed with the chambers in Cyprus, Greece and Egypt, as well as with the competent ministries and services.

The effort, according to Photiou is to join forces in order to “develop trade and investment relations between the three countries and Australia even further.”

He added that youth organisations also came up with an action plan, focusing on culture, while they are also undertaking an initiative on climate change.

“Nostos 3” activities wrap up Tuesday with a meeting of Egyptian Greeks and Cypriots who live in Australia.

While in Australia, Photiou, Makram and Quick also met with the Prime Minister of the State of Victoria Daniel Andrews, Ministers and MPs. The Presidential Commissioner noted that officials showed great interest for the three countries’ joint diaspora initiative, while Andrews asked about the latest developments with regard to the Cyprus problem and natural gas activities off Cyprus.

Injured Ronaldo expects to return in one or two weeks