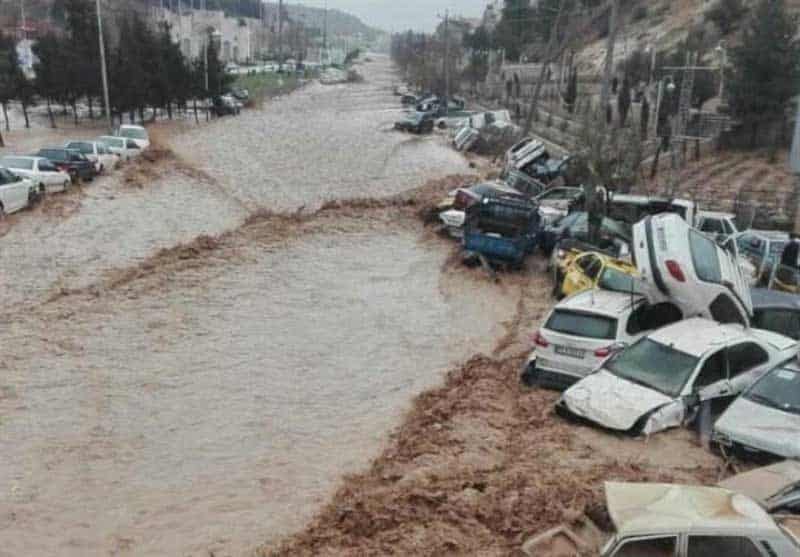 Vehicles are stacked one against another after a flash flooding In Shiraz, Iran, March 25, 2019. Tasnim News Agency/Handout via REUTERS ATTENTION EDITORS - THIS IMAGE WAS PROVIDED BY A THIRD PARTY. NO RESALES. NO ARCHIVES

DUBAI, March 25 (Reuters) – At least 18 people were killed and around 100 others were injured in flash floods in Iran’s southern Fars province, the semi-official Tasnim news agency reported on Monday, with more rain forecast following days of devastating floods in the north.

Some 26 provinces out of 31 now have flood warnings due to torrential rain in a country more accustomed to drought. State TV said villages near rivers and dams in several provinces had been evacuated for fear of the rising water.

Authorities have warned about possibility of floods in the capital Tehran as well as in the oil-rich southern province of Khuzestan in the next 48 hours.

Pragmatist President Hassan Rouhani’s hardline rivals have criticised his government for doing too little, too late to help.

The hardline judiciary said on Sunday the government’s handling of the disaster was being investigated, the judiciary’s Mizan news agency reported.

“Any shortcomings regarding the handling of the floods, failure to provide relief and aid to the survivors will be investigated,” it quoted judiciary chief Ebrahim Raisi as saying. Hardline cleric Raisi lost the 2017 presidential election, when Rouhani was re-elected.

The semi-official Fars news agency reported on Monday that Rouhani has returned to Tehran from Iran’s Qeshm Island in the Gulf, where he had been spending the Iranian new year holiday.

He had been criticised by Iranians on social media for being in the south when flooding was hitting the north of the country.

His energy minister, Reza Ardakanian, said climate change had caused the floods. “Climate change is forcing itself on our country. These floods in Iran are the result of climate change worldwide,” Tasnim quoted him as saying.

Reflecting a long-running struggle between the president and his rivals, Iran’s hardline media have accused the government of reacting too slowly to the floods, while highlighting aid work by the Revolutionary Guards – a rival power centre in Iran’s faction-ridden political establishment.

The spread of flooding to the south follows days of floods since March 19 that affected more than 56,000 people living in 270 villages and small towns in the northern provinces of Golestan and Mazandaran, on the Caspian Sea, TV reported.

In Shiraz, in the south, Tasnim quoted the head of Iran’s emergency medical services, Pirhossein Kolivand, as saying 18 people had been killing, including four children. Some 94 were injured in the city in Fars province.

Iranian media showed pictures and footage of crumpled cars piled up deep in mud and water after floods swept through Shiraz. Iran’s Students News Agency ISNA said high water had damaged thousands of houses in Shiraz and other towns.

Fars Governor Enayatollah Rahimi told state TV the flooding was under control and rescue and aid workers had been dispatched to the flood-hit areas.

British lawmakers vote to seize control of Brexit for a day