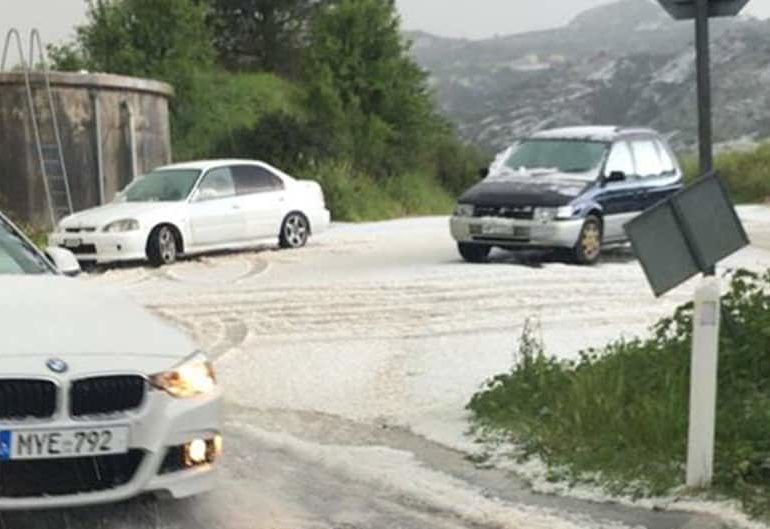 Paphos communities on Tuesday called on the competent state services to promptly record the damage to the crops caused from extreme weather conditions in their area on Monday, the worst of the last 50 years, some said.

Hail on Monday caused severe damage to vineyards, citrus and almond trees in Peyia, Miliou and Yiolou. Community leaders of the areas in question called for prompt response by the state for compensation of the stricken producers.

Yiolou community leader, Stavros Vrahnou, told the Cyprus news Agency that this was the worst damage he has seen in the last 50 years. The hail damaged deciduous, citrus and almond trees, he said, adding that the competent state services ought to promptly record damage so that the affected producers are compensated.

In total 30 families that own vineyards in Miliou have been affected by Monday’s adverse weather, the community’s leader, Eva Chrysanthou said, albeit, “luckily”, most use the produce for their own consumption.

She added that damage was also recorded on citrus and other fruit-bearing trees.

The hail damaged the blooms of many peach and apricot trees meaning that producers will not be able to harvest the crops, Chrysanthou said.

Agriculture Minister Costas Kadis said that the picture was not yet clear as to the extent of the destruction but that officials of the farming insurance agency (OGA) would assess damage so that compensation would be paid to those found to have been affected.

UK lawmakers urge May to heed them on alternative Brexit plans