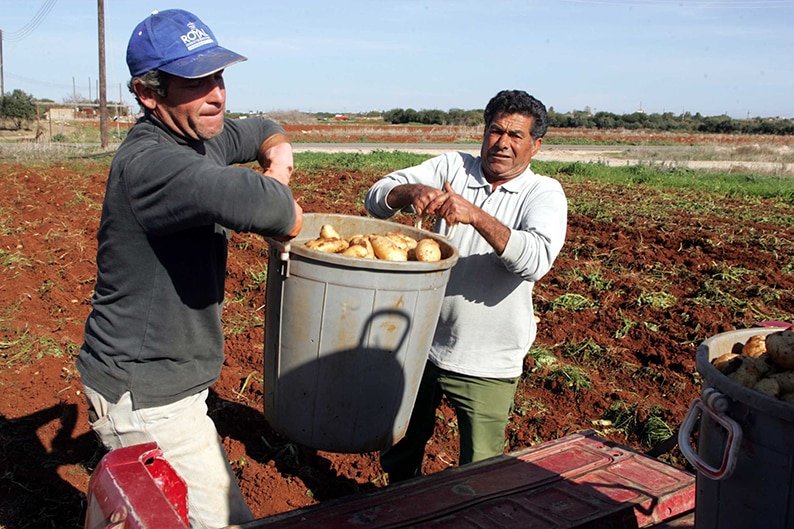 Xylophagou, potato farmers are concerned that their special status will make them liable to EU custom duties

While the European Union and Britain wrestle over the “Irish backstop” issue in their stalled Brexit agreement, a similar problem is taxing another island at the other end of the continent – Cyprus.

In addition to military compounds, 22 communities with 11,000 people live in the British bases (Sovereign Base Areas or SBAs).

Under the withdrawal agreement with the EU, so far rejected by the British parliament, this territory would have remained linked to the bloc under a customs union.

With no deal, the SBAs, which comprise three per cent of Cyprus’ land mass and are a farming breadbasket, could be thrown into legal limbo. Trade is an EU competency, which means any arrangement cannot be hammered out bilaterally between Nicosia and London.

Cypriot residents say they are in the dark.

“Of course it’s a concern but unfortunately nobody has informed us about anything,” said Christos Misos, a farmer who helps run a family business in the community of Xylophagou, famed for its red-soil potatoes, a prized Cypriot export.

“Will we need to pay customs duties for our products to go to Europe? What will happen to us? We want someone to tell us – if they know – because things look really fluid.”

EU law does not apply in the SBAs but under the protocol agreed when the Republic of Cyprus joined the EU in 2004, EU law applies in areas such as customs, value added tax (VAT), agriculture and fisheries.

“If Britain leaves the EU without a deal we will be obliged to have customs checks for the trade of goods,” government spokesman Prodromos Prodromou said.

The British military bases, he said, were a “special case”.

“For the moment we do have a deal which is part of the general agreement. Maybe it will be based on that protocol to continue the negotiations to find a way out,” he said.

The bases – Akrotiri and Dhekelia – are classified as a British Overseas Territory and help to project British military power in the Middle East.

People there say they have had no contact with authorities on the potential impact of Brexit. Future development of their properties, now subject to some restrictions because of their status within the SBAs, is a primary concern.

“It’s a bit like the Vatican, a state within a state,” said Christofis Kashiouris, the community leader of Ormidhia, which is surrounded by the SBAs.

Senior EU officials say the issue is legally complicated but their over-arching aim is to ensure there is no disruption.

“What we want to ensure is that nothing is changing,” one official said. “It is not straightforward, but the objective is that we would pursue no controls on goods.”

Britain and Cyprus are keen to stress their intent to make any transition as seamless as possible, even though they are still trying to work out how.

The British High Commission in Nicosia said it deeply valued “the distinct and long-standing arrangements on the SBA-Cyprus border” as well as the daily benefit it brought to people.

“To be clear, in a Brexit with a Withdrawal Agreement, people living and working in the SBAs will see no changes in their daily routines. The agreement in no way changes the UK’s commitment to the SBAs or to upholding the Treaty of Establishment that underpins the current arrangements.

“In a no-deal Brexit we are confident we can come to a similar arrangement with our Cypriot partners,” it said in a statement.