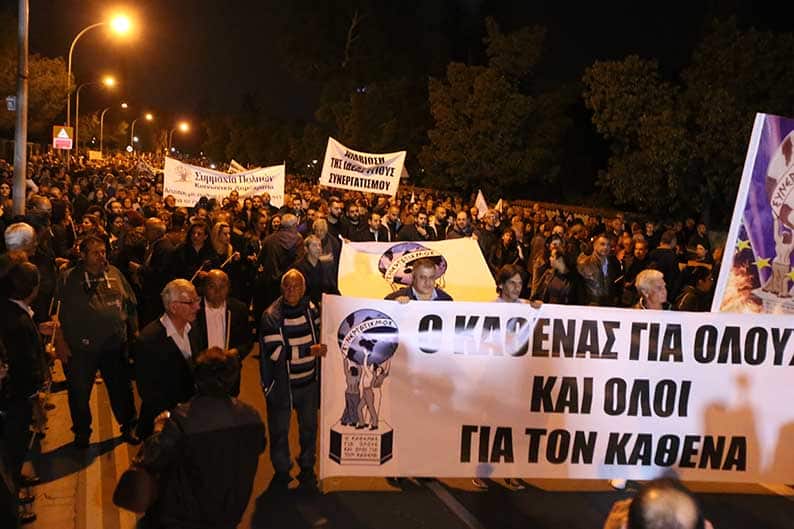 Between 2,000 to 3,000 people marched to the presidential palace in Nicosia on Wednesday evening to protest the closure of the Co-op Bank and demand punishment for those who were responsible.

Some 20 organisations, including political parties, teachers’ groups and unions, took part in the protest, which was mostly peaceful apart from some booing and jeering.

“Tonight, we are sending a clear message that society is reacting and will not settle with anything less than the exemplary punishment of all those responsible for the collapse of the Co-op,” said Yiannos Socratous, head of the secondary teachers’ union Oelmek.

He said the government should immediately launch the required processes to assign political, civil and criminal responsibility on all those who contributed to the collapse throughout the years.

A probe into the demise of the Co-op Bank held Georgiades mainly responsible and also recommended launching investigations into possible criminal offences committed by Hadjiyiannis and others.

The protesters also demanded the Co-op’s assets to be returned to the communities where they are located.

They want the state to assist efforts currently underway to revive the co-op movement.

“This is a double moral debt to those who built the co-operative idea, during hard times, and the next generations to whom the future of this country belongs,” Socratous said.

A delegation handed a resolution with the organisations’ demands to President Nicos Anastasiades.

Earlier, the government reiterated its support for transferring Co-op properties taken by the state following the lender’s demise.

“On February 20, a decision was taken whereby a large amount of the seized real-estate would be granted for use either by communities or by services that are beneficial for the public,” said government spokesperson Prodromos Prodromou, speaking after the cabinet meeting on Wednesday.

Following the collapse of the Co-op Bank last year and its subsequent sale to the Hellenic Bank, a total of 2,815 properties of a cumulative value of €600m, fell into government hands and specifically to the state-owned Cyprus Asset Management Company (Kedipes).

Cabinet members have reiterated their support for the decision, which has been demanded by a wide range of groups whose co-operative savings fund was the previous owner and manager of the properties.

“Although the deadline is set at four months from now, the procedure has already begun – applications have been accepted, the existing list [of properties] and the legal procedures needed are being studied, and decisions will be announced as soon as possible,” Prodromou said.

In meetings with government officials, organisations were told that the procedure would involve the return of the seized properties to the union of municipalities and communities, which are extensions of the state, before they are rented out at low prices to the agricultural sector and other organisations.

May says she will quit if her Brexit deal passes, how MPs voted