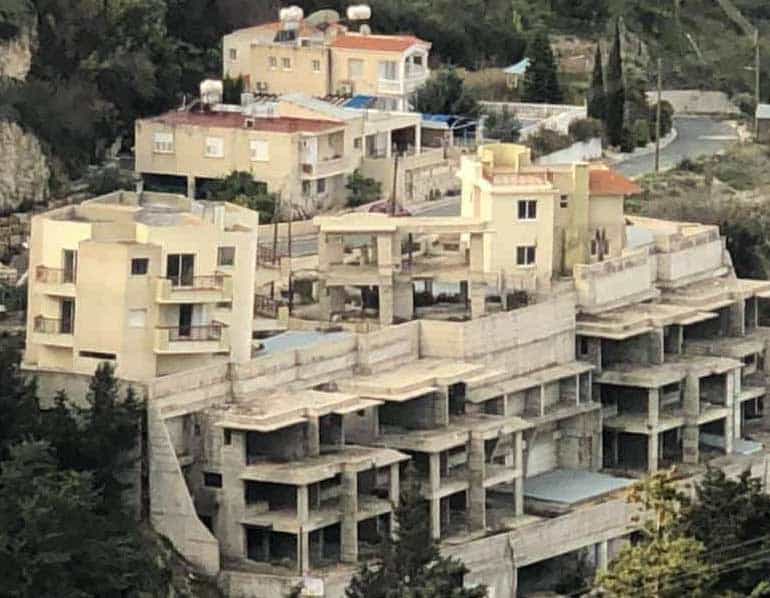 Developers of a stricken project that is sliding down a hillside in Tala have been found guilty of not complying with the terms of a building permit at the Supreme Court, Paphos District Officer Mary Lambrou told the Cyprus Mail.

“On March 27, the Supreme Court found the developers guilty of undertaking several alterations and not proceeding according to the permit given and thus causing the problems being experienced,” she said.

She added that the Paphos District Office, PDO, is waiting for the court to decide on the final penalty, which may include ordering the demolition of the development.

Recent heavy rainfall has accelerated the problems with huge cracks appearing in buildings which are tilting, and ripples and cracks apparent on the busy Kamares road beneath.

Tremetoushiotis Developers Ltd (established in 1992)– operating under the umbrella of Top Cyprus Properties– were responsible for the construction of the development, but have said that they would never have gone ahead with construction if they had been aware that the land was ‘problematic’ to build on. They have argued that the fault lies with the authorities.

“We wouldn’t buy the plots if we knew there was an issue with the subsoil on the area and even if we found out afterwards, would we build there. We have suffered financial damage of more than €3.5m for the construction, and have reimbursed the owners of the properties with an additional cost of €750.000,” a representative of the developers, Christis Tremetoushiotis, told the Cyprus Mail.

In August 2003, the developers purchased three residential plots from Ayios Neophytos Monastery with a building allowance of 60 per cent.

“Residential plots is important as a term, as according to planning and building law it is translated to plots where the owner is allowed, and also safe to build on them without any limitations or precautions.”

He said that in a map issued in 2003 by the Cyprus Geological department, were published only for governmental use by the inspectors of the building permit applications prior to any approval.

“We have applied for a building permit in 2005, and it was approved without any notes or remarks in 2007.” Construction got underway in 2008 and by 2010, five of the fourteen units were delivered to the owners.

“The rest of the complex was paused due to the recession and we planned to finish it upon sale,” he said.

However, in 2011 following a period of heavy rainfall, problems started appearing with the first cracks around the buildings and the parking areas becoming apparent. Since then, there is a continuous movement of the underground subsoil, he said.

“Immediately without accepting any liability regarding the issues, our company offered the owners of properties in the complex alternative properties in another of our complexes of equal value.”

The developer cannot afford to proceed with the demolition, he said.

In 2011 the PDO proceed with court action against the company for not following the terms of the building permit, something which the developer refutes.

Tremetoushiotis has contacted residents to provide them with information and details about the case, the history and procedures taken by the developers until now, he said.

“As we have informed the PDO and ministry of interior with letters dated 18/02/2016 and earlier this month, the danger is obvious, and we gave our permission to the PDO to take any necessary actions even if this is to demolish the whole complex in order to protect the area, residents and those who drive by.”

Tremetoushiotis said the developers understand everyone’s concern and they have every right to be worried, as the mountains movement is like a ‘time bomb’ for the condition of the structure.

“The PDO suggested a few measures in 2013 which they have undertaken, which they said would stabilise the movement – according to the findings of a survey they did.”

“The PDO suggested a few measures in 2013 which they have undertaken, which they said would stabilise the movement – according to the findings of a survey they did.”