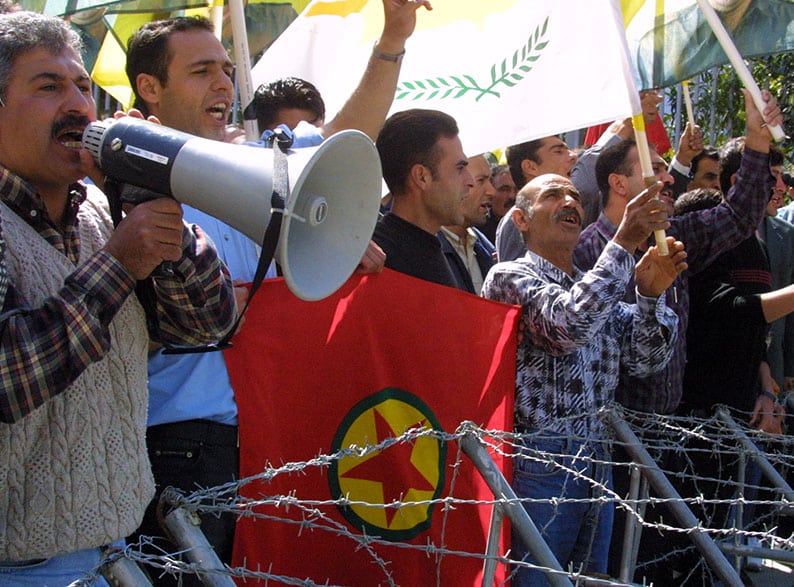 File Photo: Kurds living in Cyprus during a protest in the past

The Kurdish community in Cyprus are planning a protest next week outside the Larnaca district court and have launched a petition calling for the release of 60-year-old Cerkez Korkmaz, a Kurd with Turkish citizenship arrested last week in Cyprus, who is facing prosecution in Germany on terrorism charges.

Korkmaz, who has been living in Cyprus for a number of years after being recognised as a political refugee and who possessed Cypriot travel documents, was arrested last week at Larnaca airport from where he was to travel to Athens after it emerged during passport control that the German authorities had issued a European arrest warrant and extradition against him on March 19.

He was wanted in connection with terrorism offences allegedly committed between 2013 and 2015 in Germany, reportedly concerning links to the Kurdistan Workers’ Party (PKK).

The government said in a statement on Saturday that the man was arrested as he is facing prosecution in Germany on terrorism charges and that he was taken to court last Friday and would remain in detention until his extradition hearing, which will reportedly be some time next week.

On the basis of current legislation, the situation will be handled by the Cypriot justice system, which must decide whether to execute the European warrant within a period of sixty days, the government had said.

His arrest stirred reaction by the Kurdish community living in Cyprus, which is calling for his release.

An online petition has already been launched addressed to the justice minister, calling for Korkmaz’s release arguing that other European countries ignore such requests on Kurdish fighters.

According to the authors of the petition, Germany issued the arrest warrant against Korkmaz on the request of Turkey since the latter is unable to arrest Kurdish fighters “and is asking Germany to do its dirty work”.

Taking into account the hundreds of thousands arrests and jail detentions in Turkey, the petition says, many European countries ignore such demands by Turkey against Kurdish fighters.

“It is disappointing to see that Cyprus is willing to apply such warrants, a country that has been invaded by Turkey and continues to deal with Turkish threats and interventions in the Cypriot exclusive, economic zone,” it says.

Hundreds of thousands of Kurdish fighters live today all over Europe as political refugees, it says, but Turkey, can, at any given moment, abolish and break the entire political asylum system with a simple ‘terrorism’ accusation. The petition gives as glaring example that of the case of “Kurdish leader” Abdullah Ocalan in which case “political asylum failed miserably.”

It said that the signatories are calling on political parties, trade unions, artistic and other organisations, on all democrats and supporters of the Kurdish struggle, “to mobilise for the immediate release of the Kurdish fighter.”

Korkmaz, reportedly stayed in Germany between 2013 and 2014 and last visited the country in 2015.

The protest is to take place next Tuesday outside the Larnaca district court during Korkmaz’s extradition hearing.

Loiseau says ‘People’s Vote’ would be denial of democracy

French defence minister due in Cyprus on Tuesday